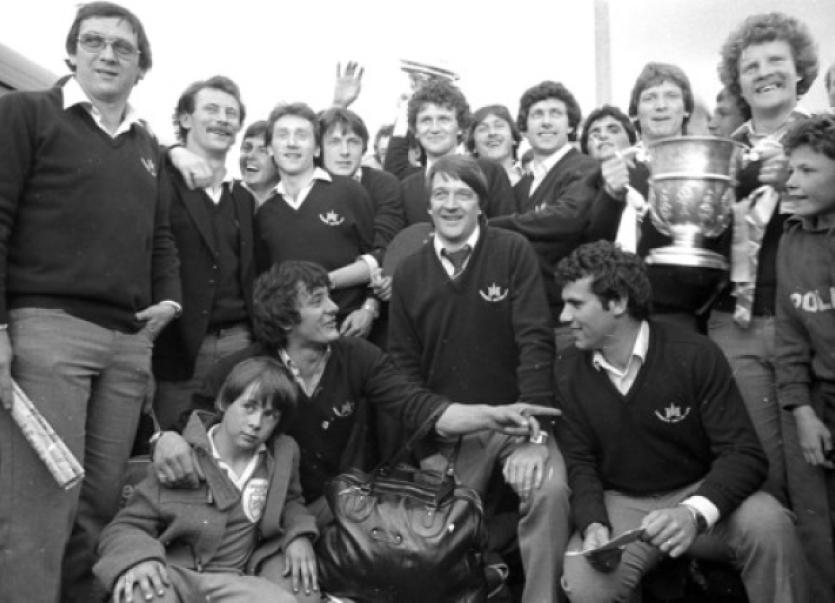 Steven Miller talks to Tony Ward about his memories of playing with Limerick FC.

Steven Miller talks to Tony Ward about his memories of playing with Limerick FC.

HE played on a Munster team that beat the All Blacks in 1978, was European rugby player of the year in 1979 and scored 18 points for the Lions in the first test game against South Africa in 1980. It’s no wonder Tony Ward has made a career for himself in rugby.

But his soccer story is a fascinating one too. “My last game of 11-a-side soccer was against Man Utd in the Markets Field, in a testimonial game.”

He also won an FAI Cup medal with Limerick, played against Spurs in Thomond Park the day Glen Hoddle scored four goals and when he came across Kevin Keegan when Limerick played Southampton in the Uefa Cup, Keegan gave him an England soccer jersey in exchange for an Irish rugby one.

When Ward arrived to Limerick in the autumn of 1974 to begin studying PE, he was playing with Shamrock Rovers. His only previous trips to the city were with a Dublin team in the All Ireland Youth League. He still togged out with Rovers but it was problematic.

“Whatever about getting back to Dublin to play, the real problem was going to Waterford or Finn Harps and trying to be back in Limerick in time for college again on Monday morning.”

Garryowen gave him his first taste of Limerick sport and within weeks of joining the club he was playing in the Munster Senior Cup.

“I couldn’t believe what I was part of,” he says. When they beat Cork Con in the final he said “it meant absolutely nothing” to him. “I didn’t appreciate it at the time but I sure did appreciate it when we won it again in 1979 after losing two finals in the meantime to Shannon.”

He dabbled in a bit of soccer in the city, playing mainly with Pike Rovers and a bit with Shelbourne and Wembley. With Harry Gibson, Eoin Hand and Dave Mahedy involved with the Limerick setup, they coaxed him into committing to them. “They got me to play whenever I was free,” he adds. “But I felt bad about coming in for all the big plum games. I didn’t get a penny for playing with Limerick but I didn’t want it. I absoluletly loved those times. And I loved my years in Limerick.

“I did actually play in every game of the cup run that season (1982) except the first round game that we drew with Athlone. I even played against Aer Lingus in one of the rounds. I met Roddy Collins in RTE recently and he said to me that he can remember playing against me that day.

“We got such a great reaction for winning the cup and I’ll never foget the homecoming.

“It’s great to see Limerick are going to have Premier Division football again and I’m sure Limerick people will respond well to it.

“I plan to go down to one of the games in the next couple of weeks with Dave Mahedy - hopefully the St Pat’s or Shamrock Rovers game.”

And the one thing that really excites him is the prospect of Limerick returning to play their games in the Markets Field.

“I’m delighted that that’s going to happen. The Markets Field is the spiritual home of Limerick soccer just as Thomond Park is for rugby.”

As a man who played in both grounds on big days, he’s knows what he’s on about.