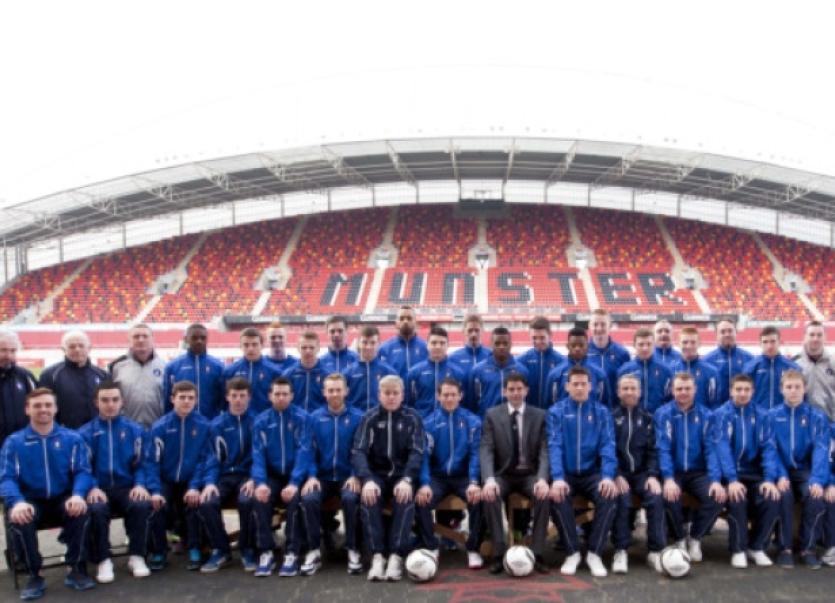 With Limerick FC set to begin their 2013 season with a home game against Cork City on Sunday, we profile all the squad members.

With Limerick FC set to begin their 2013 season with a home game against Cork City on Sunday, we profile all the squad members.

The Ennis native spent most of his career in Dublin with Shamrock Rovers, St. Patrick’s Athletic and the now defunct Dublin City franchise before joining Galway United in 2009.

Barry was picked up by Pat Scully before the beginning of the 2011 season, where he competed with younger brother Dave, who has recently departed for Inchicore.

Born in Glasgow, attacking full-back Jonathan Tiffoney progressed through the Ayr United youth system before making the big step up to the senior team in 2010. Voted as “Young Player of the Year” at Ayr United before he departed, Tiffoney has also been capped at U-21 level for Scotland.

Shaun Kelly adds yet another Scottish connection to Limerick FC as the right-sided full back began his career at Hearts before deciding he didn’t enjoy his football in Edinburgh.

The Killybegs native signed for Dundalk when he returned to Ireland, despite interest from his boyhood club, Finn Harps.

Shaun left Oriel Park for the west of Ireland in 2011 when he agreed terms with Galway United. Pat Scully capitalised on Galway United’s demise in 2012; picking up Kelly for Limerick FC’s promotion hunt.

Stephen is a quality product of Galway football having learned his trade at Mervue United and Salthill Devon. The left-sided centre half established himself at Newcastle United before a knee injury ruled him out for a long spell on the sidelines. The young defender is known for his composure and passing ability. Despite attacting the interest of many League of Ireland clubs during the off-season, Folan chose Limerick as his destination for the 2013 season.

As a Limerick native, O’Callaghan impressed during his time at both Granville and Pike Rovers, securing him a move to Barnsley. Playing over seventy times for the Yorkshire outfit, O’Callaghan then had spells in Iceland and Notts County before signing for Cork City in 2006. Halifax Town was Brian’s next port of call, before signing for hometown club Limerick FC in 2009. Despite having his time at the club hampered by injury, Brian agreed terms with Limerick for the 2013 season.

Another product of Limerick junior football, “Superman” Pat Purcell signed for St. Patrick’s Athletic in 2000, before returning to Shannonside a year later to sign for Limerick. His three year stint with the Blues included a League Cup winning season; beating Derry City on penalties. Picked up by Alan Reynolds for Waterford United in 2004, Purcell spent a couple of years at the RSC before joining Limerick once more in 2006. The club captain has been an ever-present feature of Limerick teams for the last six years and signed on once again ahead of the 2013 season.

The Pontefract-born left back began his career at Barnsley back in 2002. From Oakwell, Williams went on loan to Blackpool before joining Huddersfield Town in 2007. Having made over 200 appearances in England after spells with Stockport and Rochdale, the free-kick specialist joined the Blues from Plymouth Argyle and will look to cement the number three spot for the coming season.

Captaining Arsenal’s reserves for quite some time and being capped for his country twice at U-21 level, Stephen Bradley is a central figure to Limerick’s midfield.

Upon his release from Arsenal in 2005, the Dublin native signed for a championship-winning Drogheda United before making a swift return back to the UK to Scottish side Falkirk the following year. Michael O’Neill signed “Bradders” for Shamrock Rovers in 2009 where he went on to win the Premier Division trophy for a second time.

His impressive performances for St. Patrick’s Athletic in 2011 secured him a spot in the PFAI Premier Division Team of the Year. Bradley became Pat Scully’s biggest signing prior to the 2012 season.

Known for his hard-tackling, never say die attitude, Joe Gamble signed for Cork City after impressing for local side Everton AFC. Shortly after signing for City, Gamble secured a move to Reading. While Joe only made seven appearances in four years, he did enjoy a loan spell at Barnet, where he became a regular. Joe made his Turners Cross comeback in 2004; winning a league title, Setanta Cup and FAI Cup medals over the next six years. Hartlepool United was Gamble’s next port of call, alongside team mate Denis Behan. Joe was released in 2011 and signed for Limerick in July of that year. He has been capped twice by the Republic of Ireland.

Dave joined Limerick from an early age after attracting a lot of attention, thanks to his displays for College Corinthians. Making his debut against Cork City, O’Leary dominated the game at just seventeen years of age. Going from strength since joining the club, the Cork native is the prime example of Limerick’s exciting talent coming through the ranks.

Signing first for Mike Kerley’s Limerick side in 2008, Jeffrey’s energy and drive were impressive to the Jackman Park faithful when he made his debut against Kildare County. A local lad; Jeffrey spent most of his junior career with Fairview Rangers. Establishing himself as a central figure to Limerick’s midfield in 2010, Jeffrey progressed as a footballer a year later – scoring eight times in his twenty-nine league appearances, including a hat-trick against Monaghan United in the EA Sports Cup. Jeffrey signed a new deal under Stuart Taylor’s resigme for 2013.

Hailing from Nenagh, McGrath signed for Limerick in June 2011 at the tender age of just 16, from Nenagh FC. Spending most of his first season playing at A Championship level, McGrath also featured for the U-19s. Making his league debut in 2012 as a late substitute against Mervue United, McGrath became a favourite among Limerick fans. James helped Limerick to a 5-2 victory over SD Galway – scoring twice at Terryland Park.

A native of Galashiels, Galbraith began his youth career in Edinburgh with Hearts before signing for Manchester United on his sixteenth birthday.

Scoring a penalty in the FA Youth Cup final for the Red Devils against arch rivals Liverpool was the height of the young Scot’s time in Manchester, as Galbraith was released due to persistent injury.

Signing for Hibernian in 2009, he went on to make over fifty appearances for Hibs, including an injury time winner at Celtic Park. Galbraith was released by the club in January of this year, before being picked up by Stuart Taylor’s Limerick.

Steven McGann is a young midfielder who has attracted interest from across the water. A tremendous ball player with great enthusiasm, McGann holds the record for the youngest player to ever score in the League of Ireland. Steven was 15 years and 359 days old when he scored against Athlone Town on the final day of the 2010 season.

After putting in some top class displays for local side Wembley Rovers, Shane joined Arsenal in 2005; playing more U-18 games than any other squad member. After stepping up to reserve level, Tracy was released in 2007. Signing for Galway United, Shane was loaned to Limerick before making his move permanent in 2009. Shane won the Supporters’ Player of the Year last year.

As the most senior and most travelled member of the Limerick squad, Dominic Foley has been around the block; playing at the highest level and picking up Ireland caps in the process. Having lined out for clubs like Braga, Wolves, Watford and Gent, Foley decided to return to his native Charleville in 2012, signing for Limerick in the process.

Spending all his junior career at Mervue United, from schoolboys upwards, Rory’s first change of scenery arrived in 2011 when Pat Scully signed him from the Galway outfit. Despite not scoring in his first season for the club, Rory hit double figures in 2012. Hailed as the “Ginger Ronaldo”, Gaffney’s pace and direction is a valuable asset for the club.

Craig Curran began his playing career at Tranmere Rovers – a club very much in his locality. Signing for Carlisle United and then Rochdale, Curran’s most successful stint arrived while on loan to Chester. The Liverpudlian scored seven times in eleven games while at the Deva Stadium. Craig is on loan from Rochdale and the deal runs until June.

Having linked up with manager Stuart Taylor while at Hamilton, the Scot felt assured enough to bring the 23-year-old striker with him to Thomond Park. Having played for a host of clubs including Motherwell, Bossekota’s willingness to track back as well as putting in the effort in the final third could prove vital to Limerick in the last 15 minutes of games.