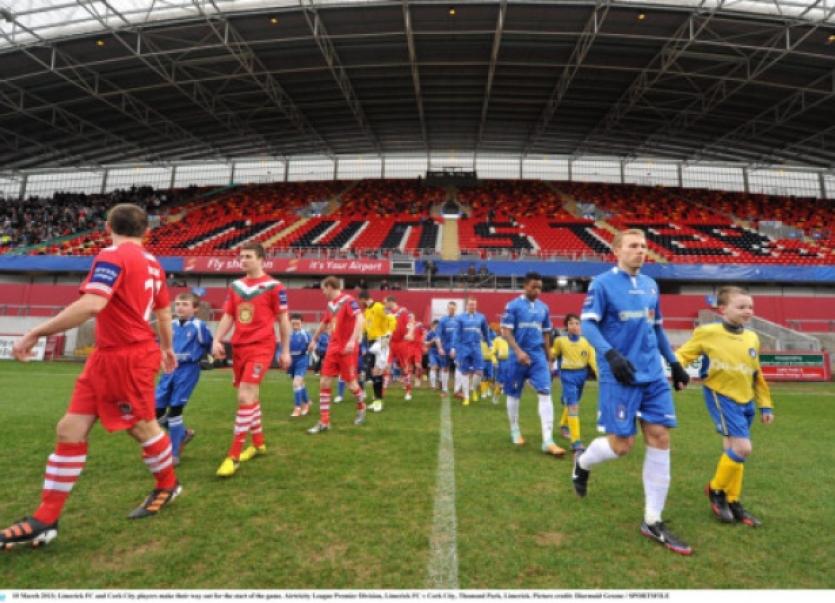 LIMERICK FC marked their return to the Premier Division of the Airtricity League after 19 seasons out of the top flight by earning a precious point in a 0-0 draw with Cork City at a wet and blustery Thomond Park on Sunday night.

LIMERICK FC marked their return to the Premier Division of the Airtricity League after 19 seasons out of the top flight by earning a precious point in a 0-0 draw with Cork City at a wet and blustery Thomond Park on Sunday night.

It was an encouraging beginning to the reign of recently appointed Limerick manager, Stuart Taylor and his new look side.

Indeed, the lively Limerick side, featuring no fewer than six debutants, might well feel they did enough in the second half to claim all three points before a sizeable attendance of 3,578. The home side came closest to breaking the deadlock, but ultimately failed to convert several good goal-scoring opportunities.

The number of paying customers is especially impressive, given the bitterly cold and wet nature of the evening and the counter-attractions of live cross-channel football on TV, as well as Mother’s Day.

A lot of time, money and energy has been invested in bringing top flight League of Ireland football back to Limerick and on the basis on this maiden outing, there appears to be a healthy appetite in the city and surrounding area for the product.

Limerick supporters will be especially encouraged by their team’s style of play with a high degree of emphasis on patient, neat passing and attractive build-up play.

Gone, on this evening at least, was the more primitive long-ball, approach which, although ultimately proved successful in helping the club gain promotion back to the Premier Division at the end of last season, didn’t sit easily with a good portion of Blues fans.

The likes of classy winger Danny Galbraith, solid defender Patrick Nzuzi, hard-working midfielder Robbie Williams and frontmen Axel Bossekota and Craig Curran may not be household names in Limerick yet, but they have potential to become fans’ favourites in the coming months.

Local favourite Shane Tracy, who was a key figure in the Blues’ promotion run, turned in a very solid performance in midfield where the tireless Dave O’Leary deservedly received the Man of the Match accolade.

The best goal-scoring opportunity in an evenly-contested opening period came to the visitors on 25 minutes when City’s Daryl Horgan should have done better when denied by a smart save from Limerick ‘keeper Barry Ryan.

Limerick FC, playing into a strong wing in the second 45 minutes, created the majority of the clear-cut chances.

Winger Galbraith creating an opening for another new signing Craig Curran, but the Liverpudlian was just wide with a header two minutes after the re-start.

Man of the Match Dave O’Leary also came within a whisker of breaking the deadlock in the 65th minute when he headed Galbraith’s cross just over.

In the end Limerick had to satisfied with a point, but the gritty nature of the display augurs well for the future.

Next up for Limerick FC is a trip to Co Louth to take on Drogheda United at Hunky Dorys Park on Friday night (7.45pm)

Limerick’s playing numbers will be boosted by the return of defenders Pat Purcell and Shaun Kelly from suspension for their next outing.