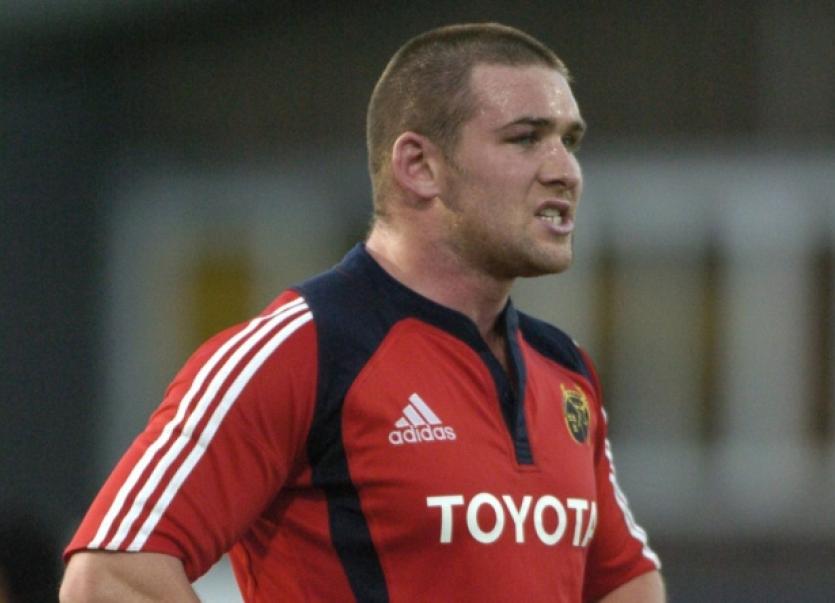 AFTER a highly successful playing career which saw him play All-Ireland League rugby at the highest level and line out for Munster between 2003 and 2009, former prop Eugene McGovern has been making a name for himself as a coach in more recent times. The 33-year-old told Limerick Leader Rugby Correspondent Colm Kinsella about the challenges of his new role as Director of Rugby with AIL Division 2C side Old Crescent.

AFTER a highly successful playing career which saw him play All-Ireland League rugby at the highest level and line out for Munster between 2003 and 2009, former prop Eugene McGovern has been making a name for himself as a coach in more recent times. The 33-year-old told Limerick Leader Rugby Correspondent Colm Kinsella about the challenges of his new role as Director of Rugby with AIL Division 2C side Old Crescent.

How long did you play with Munster?

Eugene McGovern: “I started with Munster in 2003 when I came out of Irish U-21s as it was at the time. I started in the Academy which was the Irish Academy back then. It went provincial later.

“2003 was a World Cup year and Munster had a lot of guys away with Ireland. That was an opportunity for the likes of myself and other guys to come through.

“We had gone on the Irish Schools tour to Australia when we won eight out of eight. We were successful with Munster U-21s.

“I had a development contract with Munster initially before moving on to a full contract. I had a full contract until 2009 when I stepped away from the game professionally. That was when I started off my coaching career.

How many games did you play with Munster?

E McG: “I got 13 caps in full with Munster. I made my debut against the Newport Gwent Dragons. It was brilliant. Going through school it was all I wanted to do. As a young fella, you have ‘you’re going to play for Ireland in your head.’ I enjoyed my time in Munster, learned a lot that I bring into my coaching practice these days.

“Munster sent me away to South Africa in 2007 for three months with a club team College Rovers over there in the province where the Sharks are located in Durban. It was especially like an AIL team. You are experiencing a different environment.

“It was organised by Trevor Halstead. I was thrown into a house with five lads and let fend for myself. I didn’t mind. I was at the age when I was mature enough to know why I was there. It was brilliant. The team won the league and cup.

“I came back and went straight into the team to play Leicester Tigers in Musgrave Park in a pre-season friendly in 2007. Leicester were stacked. I was up against Julian White. I thought this is my chance. About 15 minutes into the match a scrum went down all of a sudden, my leg locked out, and I ripped my hamstring. I did serious damage to it. That set me back. It was a very extensive tear. You are talking two to three months to get through your rehab.

“I had joined Garryowen at the time. It was hard. I had just joined a new club and was joining there as an injured player. You need to be getting into the side, starting games. If you are not starting on their AIL team you may as well kiss goodbye.

“As the season progressed, it went well. I got my start against Ulster up in Belfast in January. Munster had pretty much a second string side out, due to the 6 Nations, and we beat a strong Ulster side on the night. Off the back of that, I got another contract. Garryowen also won the double.

“The following year didn’t go so well for me. It is hard to put your finger on it as to why. You can blame coaches, you can blame this and that. It is what it is and I feel everything happens for a reason. You make a lot of your own luck by what you do.

“I got left go from Munster. I didn’t chose it. I wouldn’t say it to anyone that I just didn’t want to play any more. You can either be bitter and coast through the next year and realise then, but I used it to my advantage. I played with Munster, learned a lot of stuff and used that to my advantage, to progress my career.

“I had nothing to fall back on when I was left go by Munster. I had put all my eggs in one basket. That is one regret I have. I really thought I would be pushing, pushing, pushing with rugby. I had the belief. If you don’t have that belief you may as well not be there. And that is whether you are good enough or not.

“I did a few small courses after school, but nothing to degree level and nothing to show a company. I was about 27 or 28. That is where I was at.

“I thought about looking for a lower level club abroad, English Championship. There were a few offers on the cards. I thought do I go playing lower level and earn a mediocre salary, play there for two or three seasons and then come back and be back at square one. I made the decision to stay where I was. Moving wasn’t the right fit for me.

How did you get started in coaching?

“I was gone from Crescent for two years at the time, but they approached me about the idea of getting involved in the club in a coaching role.

In the meantime, Crescent College asked if I would be interested in getting involved in coaching under Tom Tierney. As it progressed I chose that route. It was a good way for me to coach the U-20s, get my coaching badges, develop my philosophy, my ideas and as a person.

“I also went into a bit of education, strength and conditioning, with Setanta College. I finished my degree last year.

“When someone asks me how the club is doing, I don’t think of it as the senior team. I see it in its entirety. I look at it at from U-6s all the way up to senior level, from a rugby point of view, but also from a social and interactive point of view. In my opinion, the club works best as a club.”

Old Crescent had fallen on hard times in the AIL?

“The club probably had been on a downward spiral for one reason or another. It has a lot to do with the dynamics of the club. Maybe the club had become a bit short-term, planning things year by year by year. It may work ok one year, but the following year you suffer for it.

“The club was in the bottom division in the AIL. The club got together and realised that it had hit rock bottom. A group of club members got together at the end of the 2013-2014 season. We talked about the issues, reviewed what had happened and why we were where we were and we needed to figure out where we needed to go from here. The main thing was to put in a structure at senior level. Our under-age is very competitive from Under-6s to U-18s. We had no transition. We had no U-20s team from the year before, the year we got relegated. Essentially, there was no bridge for the young fellas to get through. There was no competitive senior side for the younger guys to stay with.

“I was appointed Director of Rugby. As part of my role I wanted to go in as U-20s coach. The reason is because I am so big on the transition. If you have a guy at U-18 level, he needs to come up to the U-20 level. I had a relationship with guys who had gone through the schools system. Off the back of that, you had the transition, guys coming to the club. I had a relationship with them. That is where the Director of Rugby role came in.”

Limerick sides have faced a huge challenge trying to retain players services through the recession?

“You can see almost all the clubs in Limerick have been relegated in the AIL over the past few years.

“You are going to lose guys to work, injury, career, bigger clubs. There are so many variables against you. Buy you have to control the variables you have control of, the under-age system and structures.

“If we keep guys coming through the ranks, you are going to progress. You will only lose a small number of guys. That is our approach to the small player pool and the big number of clubs within the city.

“Last year with our U-20s we had a very successful season. We had a good balance. Guys were playing with their friends. When other clubs came knocking, they stayed put. They felt a bond to the club.

“It is looking after your players. It is all about jobs. We have a Jobs Committee this year which is working overtime so guys don’t have to go to Dublin. They can stay with the club. That is part of our recruitment, jobs.

Do you think Limerick’s economy has turned the corner?

“You don’t hear the word ‘recession’ any more. You would have heard that word every day before.

There are a lot of positives in Limerick, a lot of companies investing in the city. I genuinely do see jobs coming up. They may not be as frequent as in the likes of Cork, Galway, but at the same time there are more here. We are fortunate we have good contacts in Crescent.

What is Old Crescent first team’s ambition for the season ahead?

“Promotion out of Division 2C in the AIL is the aim for our senior squad this season. It is our ultimate goal in the club.

“Our initial goal was to put structures in place, coaches, the way we do things and run things. Everything is very transparent to the players.

“It filters down to players. They see it. It is about developing players, developing coaches and the club environment. However, essentially our goal is long-term. It is not from season to season. We have a three-year plan.

“We have put structures in place to facilitate fielding a seconds time week in and week out as well as having a thirds team. We are fielding four senior teams (including U-20s). We did that last year and I think we were the only club in Limerick to do so. We didn’t give one walkover.”