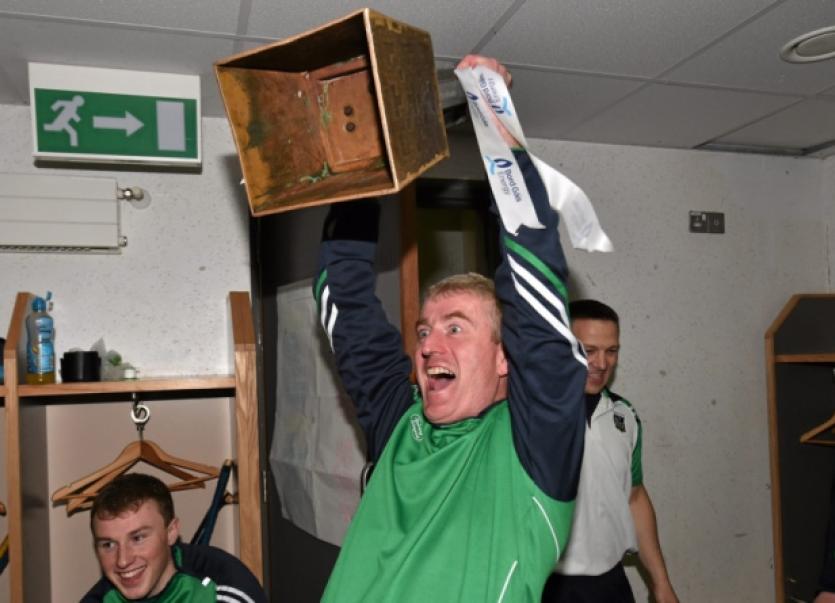 LIMERICK’S All Ireland winning manger John Kiely has described the performances of his U-21 heroes as a “tidal wave”.

LIMERICK’S All Ireland winning manger John Kiely has described the performances of his U-21 heroes as a “tidal wave”.

The Shannonsiders beat Tipperary, Clare, Galway and Wexford to lift national honours and the manger is loud in praise of his 40-man panel.

“We just needed to get over Tipperary - that win against Tipperary was so important. It gave us the opportunity to get the monkey off the back of the defeats of the last three years and give the boys confidence and give us the launchpad to get the boys training and working hard. Momentum built and built and it seemed like we were a tidal wave in the finish today and that momentum was almost visible on the pitch - there was no stopping them,” said the manger.

“Hats off to the boys, it’s hard to bring stuff from the training ground and the meeting room on All Ireland final day but they did and very successfully so. Everything we had spoken about for weeks on end, just came off and I am so delighted for the lads,” said the Galbally man.

“It’s hard to believe it,” he said of the emphatic victory.

“Even as the game was going on I was just waiting for the moment that was going to put us under pressure. They got a goal but listen the manner in which the boys went about getting the next point - their determination to run forward was just incredible. At every opportunity our boys dropped the shoulder and rain and there was nothing going to stop them - there was always someone else on their shoulder waiting for the pass,” explained Kiely.

“I didn’t see that coming - I was quite wary of Wexford. Losing a final (2014 to Clare) and they had a lot of players there from last year and their performance against Kilkenny (Leinster final), I thought they were going to bring something to this game that I had not seen with the others teams in terms of the aerial ability and the directness of their play. You need to be very resolute and good in the air and lets face it Limerick teams wouldn’t be known for their prowess in the air in recent years and we have focused on that for the last couple of weeks that we were going to stand up and catch ball and if it didn’t stick we were going to get it on the ground - that was the launchpad for our attacks and our work rate was tremendous throughout the field.”

“Hats off to them - they are a fantastic bunch of lads, 1-40. It’s a pleasure to work with them and we had a lot of good people around us in the backroom team - fellas doing jobs carrying water bottles and picking up sliothars.”

Kiely was also quick to remember the roles played by coaches who had guided the young careers of his winning panel.

“It goes without saying we picked up these players at the start of this year and we put our stamp on them but there were so many managers and coaches like Brian Ryan, Leo O’Connor and Joe Quaid and all these people who have been involved at underage for the last few years have worked hard as have their club coaches and mentors. We have tried to mould a team around what we wanted them to do and around their own strengths. Speed was a huge factor in the way that we decided to play the game this year,” outlined Kiely.

But his own backroom team of Jimmy Quilty, John Flavin and Ross Corbett have certainly worked wonders this season.

“I am delighted for Jimmy Quilty - he is a phenomenal coach and I was so happy to get him on board at the start of the year. He is unbelievable, he is so good at coaching it’s off the charts. He is a quiet guy and goes about his business quietly but he is super at what he does. Ross Corbett did his work with the strength and conditioning and that is well known and he does a lot of the drills with the lads as well. John Flavin is everything in this set-up - he is that go to man between management and the players and that’s why we have been able to manage 40 players on the panel. It’s a challenge to manage that many players because we can’t keep them all happy but to give them a sense that they have something to offer and shouldn’t walk away is a credit to all the work that lads have done,” explained the manager.