Twelve clubs start out in search for Limerick SFC title 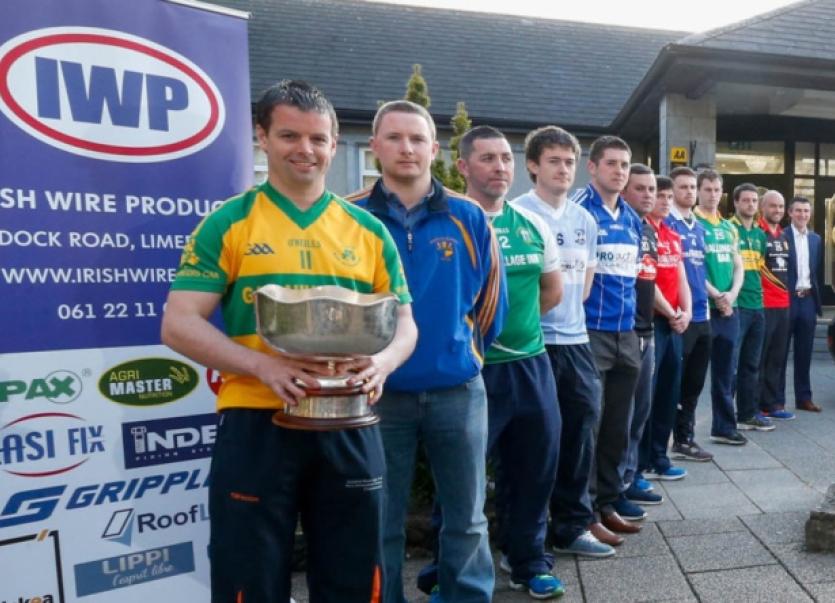 THE Limerick SFC gets underway this weekend with six first round games in the group stages.

THE Limerick SFC gets underway this weekend with six first round games in the group stages.

Jerome O’Connell previews the season as Ballylanders put their title on the line.

SINCE the turn of the millennium just four clubs have claimed honours in the Limerick SFC.

As the Irish Wire Products sponsored championship kick-off this weekend the quest of the other eight clubs is to break that mould.

The teams to beat have to be Dromcollogher-Broadford, Monaleen, Fr Caseys and of course champions Ballylanders.

Recent history would suggest that anyone laying claim to the Fr Casey Cup will have to beat at least one of this quartet in the knockout stages if they are to lift the trophy next October.

Indeed of the 12 senior clubs that do battle for the 2015 championship, just Adare, Pallsagreen, Rathkeale and Na Piarsaigh have never tasted Limerick SFC success.

Such is the disjointed nature of the championship that predicting what can happen over the next six months is futile.

But what is certain is that almost all clubs can harbour genuine ambitions of winning the championship.

From a management point of view, preparing a senior or intermediate club football side is not an easy role - achieving consistency over such a protracted period is near impossible.

Potential must be the target for August, yet three of the five group games will be played prior to that and mathematically three wins would most likely see a club progress to a quarter final.

There is also much debate about the best route to the title with one train of thought that winning a quarter final ensures a side are best placed in terms of sharpness to defeat a table topper in the semi final, who may have been idle for a number of weeks.

This was the case last year with both county finalists coming through the quarter final route.

Unfortunately the draws for the championship last December returned an almost identical structure to that of last year.

Group One contains three of the ‘big four’, with champions Ballylanders, joined by Dromcollogher-Broadford and Monaleen. On top of this are 2014 finalists St Patricks, 2013 intermediate champions Rathkeale and Pallasgreen.

Ballylanders, Drom-Broadford and St Patricks are pretty much tried and trusted units and must be in pole position to advance to the knockout stages.

The champions worked from a tight knit panel last year and any prolonged injuries would test their strength in depth.

A look through the team-sheets of the past decade will show just how much Drom-Broadford have changed. They are now an ultra experienced panel and will have options off the bench that they did not always have.

St Patrick’s will be the fancy of many to go one better than last season. They have quality across the field and crucially players that can score but consistency will be the big test for the city side.

Elsewhere in this group, there is uncertainty over the other three.

Monaleen were in the county final two years ago but the shape of their 2015 team remains to be seen. What they do have is a marque forward in the shape of Ger Collins.

Rathkeale, as they are now known after changing from Sean Finns, can aspire to greater heights than last year brought.

It’s a big season for the men in blue and white because they don’t appear to have left anything to chance with a new outside management team and some players back in contention that were absent last year.

The next six months rather than last year will tell of their standing in the senior ranks. Completing the group are Pallasgreen. They won no group game last year but beat Galbally when it mattered to maintain their status. Expect them to give more young players a chance this season but they still have an experienced backbone that will remind all of days when they lower more fancied sides in recent years.

In Group Two, five of the six teams are unchanged with just Na Piarsaigh replacing Galbally,

Fr Caseys are the only side to lift county senior honours in the last 20-odds years.

John Colbert is back at the helm but not helped by the loss of some players to emigration. But still they have to be fancied to be in content next August.

Newcastle West also progressed last year and although county senior honours have eluded them, they have quality aplenty from minor and U-21 sides.

Mike Quilligan appears to have the magic touch to get all working towards the one goal and any momentum could be hard to stop.

There will be an expectation on this duo to advance.

That will pretty much leave the remaining four teams battling towards their aspirations.

Last year it was St Kierans that stepped up to the mark, but Ballysteen, newcomers Na Piarsaigh and youthful Adare will all harbour their own ambitions of being involved next September.

The format of the championship remains unchanged with the top team in each group advancing directly to the semi finals after the five group games. Teams finishing second and third in the respective groups will play in the two quarter finals.

The bottom team in each group will be involved in a relegation play-off to determine who drops to the intermediate ranks for 2016.