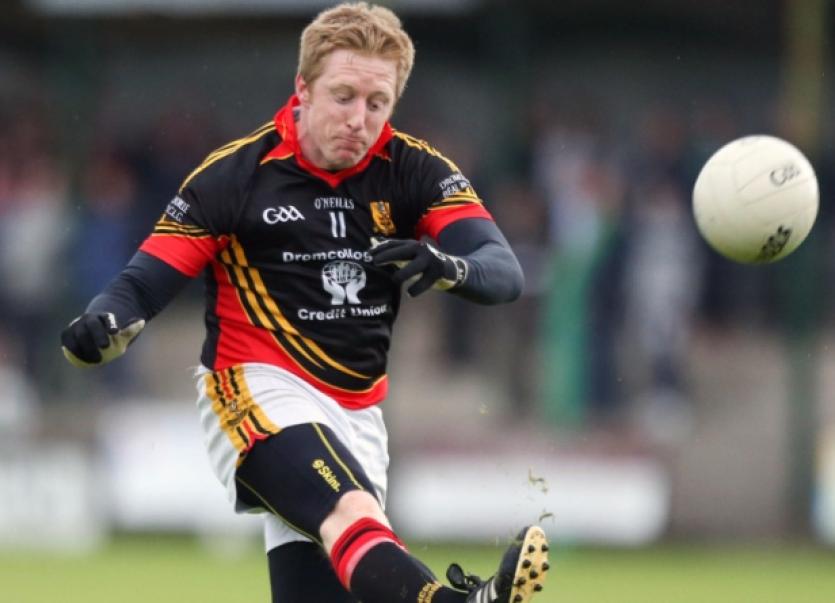 CHAMPIONS Ballylanders were beaten by Pallasgreen in round one of the group stages of the Limerick SFC this Sunday evening.

CHAMPIONS Ballylanders were beaten by Pallasgreen in round one of the group stages of the Limerick SFC this Sunday evening.

The winners were 1-6 to 0-6 up at half time with Robert O’Donnell getting their goal in the 17th minute.

They had four points from Kevin Barry in that first half while Bally relied on frees from Jimmy Barry Murphy and Danny Frewen.

Outsiders Pallasgreen got the ideal start to the second half when Seamus Mulcahy goaled in the first minute.

But the champions battled back with points from Frewen and Jason Leigh. But they were too reliant on Jimmy Barry Murphy, who finished with 0-8 (7frees and 1 ‘45).

The clinching goal came in the 54th minute from Darren Roche.

Also this Sunday evening, Ballysteen were 0-10 to 0-8 winners over newcomers Na Piarsaigh in Clarina.

The estuary side had to overcome the odds after having a man sent off in the first half.

At the interval teh sides were level 0-4 each.

There was a battle of former champions in Kilmallock with Dromcollogher-Broadford beating Monaleen 0-13 to 1-6.

The west Limerick side scored all 13-points from play.

They raced into a 0-6 to 0-1 lead with four first half points from Micheal Brosnan leading the way.

But a 17th minute goal from Brian O’Donovan helped Monaleen to battle back level at half time 0-7 to 1-4.

On the restart Ger Collins put Monaleen in front but they were to score just once more in the half.

On Saturday evening St Patricks were 0-13 to 0-4 winners over Rathkeale in Kilmallock.

The city side had six points each for Eoin Hanrahan and John Mullane.

Sean Sheehan (2), Martin Roche and Mikey Morrissey had the points for an under strength Rathkeale.

The championship commenced on Friday night with two games in Group Two.

The big clash was in Tournafulla were Newcastle West were 2-7 to 0-7 winners over Fr Caseys.

The winners were 1-5 to 0-4 ahead at half time with their goal coming midway through the half from Thomas Quilligan. He was to finish with 1-4 (1-2 from play) as Newcastle West reversed the result of last year’s first round game between the western duo.

Fr Caseys battled back in the second half with wing back Daniel Daly ending with three points from play and full forward John Riordan kicking two points.

But they still trailed by a goal entering the final exchanges. As the Abbeyfeale men went in search of the equaliser, Newcastle West sealed the win with a last minute goal from Cian Sheehan.

In Rathkeale, St Kierans ended two late goals to see off the challenge of Adare, 2-12 to 2-9.

After a sluggish opening half, St Kierans led 0-5 to 0-5 and that was after playing against the wind.