Munster crank up a gear for Europe 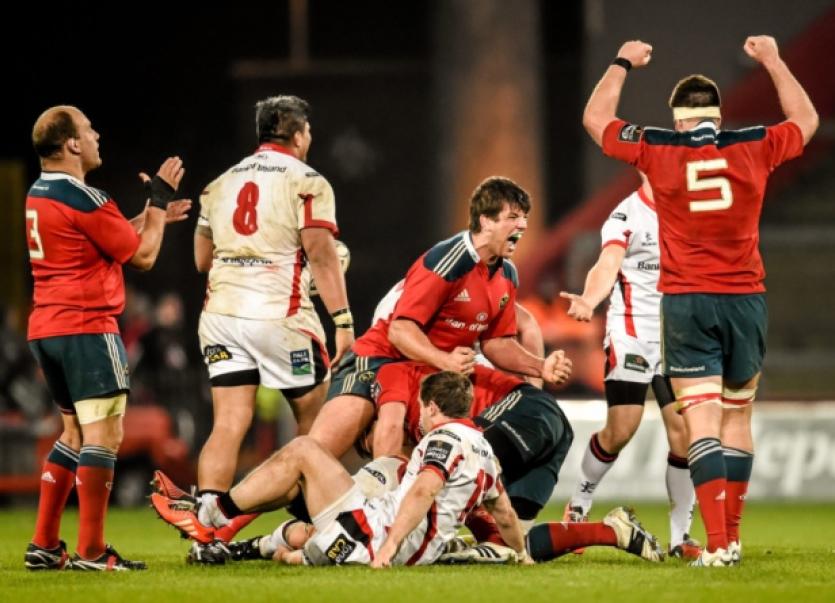 MUNSTER’S stand-in captain Donncha O’Callaghan has warned of the dangers of starting Saturday’s mammoth home European Champions Cup game against Clermont Auvergne as poorly as they did against Ulster on Friday night.

MUNSTER’S stand-in captain Donncha O’Callaghan has warned of the dangers of starting Saturday’s mammoth home European Champions Cup game against Clermont Auvergne as poorly as they did against Ulster on Friday night.

Munster escaped from their Guinness PRO12 derby meeting with Ulster with a one-point win after Ian Humphreys failed to lan a last minute conversion.

While Munster’s seventh win on the bounce in all competitions has taken Anthony Foley’s side to top spot in the PRO12, O’Callaghan warned that the two-time European Cup winners may not be able to turn things round this weekend if they are slow out of the blocks. Kick-off in the first of two back-to-back meetings with Clermont at Thomond Park on Saturday is at 5.30pm.

O’Callagahan said: “The back-to-back games always bring a little extra niggle because normally you have three weeks between them.

“It is like first half next weekend and second half the weekend after. We need to improve. I know we have Thomond (Park), but it may not be enough if we have a slow start like we did against Ulster.

“We were delighted to get a result against tough opposition. Inter-pro games are at a great level and will stand us in good stead going into next weekend. It will be up another step against Clermont, so that is the exact kind of hit-out you want.”

Munster will hope that the knocks picked up by centres Pat Howard and Andrew Smith as well as back-row Robin Copeland will clear in time for the clash with the French Top 14 giants.

Munster will be boosted by the return of Ireland internationals Paul O’Connell, Conor Murray, Peter O’Mahony and Simon Zebo for Saturday evening’s game.

O’Callaghan said: “We speak about the guys who are not involved in Ireland that we need to drive the standards so they can just slot in.

“But you are bringing back quality players. They are on the top of their game at the moment, so hopefully they can bring that little bit of intensity. You can’t look to them all the time, however.”

O’Callaghan put his hands up on his decision to opt for a kick at the posts rather than kick to the corner when Munster were awarded a penalty at 21-12 in the second half. Ian Keatley’s kick hit an upright.

“That was the call. It was probably weak on my half,” O’Callaghan said.