Munster’s Foley proves good things come to those who wait 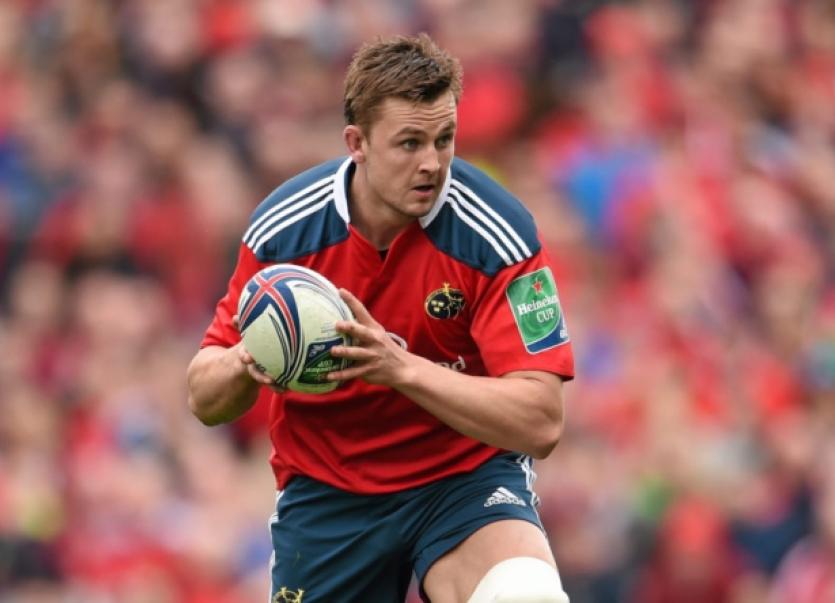 TO many casual observers of the game, Dave Foley may seem like an overnight success in rugby terms. But the 26-year-old’s path to first choice starter with Munster and a second cap with Ireland this autumn has been long and winding.

TO many casual observers of the game, Dave Foley may seem like an overnight success in rugby terms. But the 26-year-old’s path to first choice starter with Munster and a second cap with Ireland this autumn has been long and winding.

The talented second-row provided a fascinating insight this week into just how frustrating his career had been until recently and now, that he has finally making starting teams, how determined he is to retain this starting place and push on to the next level.

Foley this week signed a new two-year contract with the IRFU which will see him remain at Munster until the summer of 2017.

DAVE FOLEY: “I literally feel like I wasted a few years as such, you know, and I left Munster caps behind and stuff and I could have been in earlier so it is important now I stay injury-free and I just get as many caps as I can and add to what is going to be a successful team.”

Why do you feel you wasted chance to have more Munster caps?

DF: “It was down to myself. I don’t blame anybody else, it was down to me not training hard enough, maybe because I hadn’t got a taste for it. I’m not sure that I didn’t want it as much, I knew I wanted it but didn’t know what I had to put in to get it.

“Now that you have it, you will literally do anything to hold on to it. It can be taken off you in a moment and people want to take it off me now and I am going to do everything in my power to hold on to it.”

Is it easy to feel sorry for yourself when you’re behind Paul O’Connell as well as Donncha O’Callaghan and Donncha Ryan in the pecking order?

DF:“I suppose it’s a bittersweet situation in the face that you are learning a lot from these guys, but yet you are stuck behind them.

They have massive names, anyway, so how do you get yourself ahead of these guys - you have to be playing 20-30% better just to get yourself in the door. At times I probably was feeling sorry for myself, but being realistic I didn’t really know what I had to do to get in there.”

Did it hurt to see your UL-Bohs club mates Tommy O’Donnell and Dave Kilcoyne push on ahead of you?

DF: “Yeah, it hurt a lot, to be honest. I would have grown up with those sort of fellas, played U-18s with Killer and obviously Tommy w­as a year ahead of me. I would have gone to school with Tommy. These guys are getting in and playing well and I can’t get my foot in the door. Yet I feel if I can get in there I can play well and stand out.

“That was obviously very tough playing with those guys in UL-Bohs for two seasons and they’ve kicked on. I am watching those on a Friday night playing for Munster and I know I have to play with UL-Bohs at 2.30pm on a Saturday - there’s nothing wrong playing with UL-Bohs - but those guys were reaping the rewards and I wasn’t. We were the same age and I was kinda looking around and seeing where is this all going wrong for me. That did hurt and there was a difficult two years of it.”

You signed a one-year contract last time. Did you look to move on from Munster?

DF: “I signed a one-year last time because I dislocated my shoulder and it was just a nightmare. Of course I have looked away. Everyone knows that I have been behind a ridiculous amount of players in Munster and not just players, but some international and some world class and at one stage there wasn’t light at the end of the tunnel so I did look to go elsewhere but at the end I think I made the decision to just stick it out and see where I went from there.”

Ian Nagle moved on to the US, did you ever considering following suit?

DF: “From the point of view of Nages and myself it was never from a lack of talent, I don’t think. It was backlogged with second rows in Munster and that was the way it is. I don’t really want to be talking about Nages situation, but in mine, I looked at the amount of internationals and I probably wasn’t training hard enough or whatever,

“But you have to be realistic. When I was 22 or 23 I probably wasn’t big enough or strong enough. I didn’t have a stamp, something that stood out more than those guys that are there. Ultimately I wasn’t getting picked.

“I was picking up a few caps playing in the Rabo and that was it. It was between myself, Nages and Billy (Holland) to pick up those few scraps and at times I wasn’t even playing when the internationals were away. Right up to even two, maybe three years ago, there were times I was on the bench for the ‘A’ side.

“When you have the amount of second rows that were there it is incredibly difficult for anyone to get any kind of look in.”

What has ch=anged for you?

DF: “To be honest I try not to look back but my work ethic has changed I think.

You’ve enjoyed a terrific month with new contract and a second Irish cap?

DF: Yes, good to get the contract out of the way and look forward to those guys. I have two caps for Ireland, I am out of the one-cap wonder which is always a bonus and hopefully I will get more but it is not something I’m focused on. I have always said that I just want to play for Munster and any bonus I get from that is just a bonus.

DF: Yes, that is exactly it, it is nights like that you want to play and welcoming a French side into Thomond Park is something that is very enjoyable.”