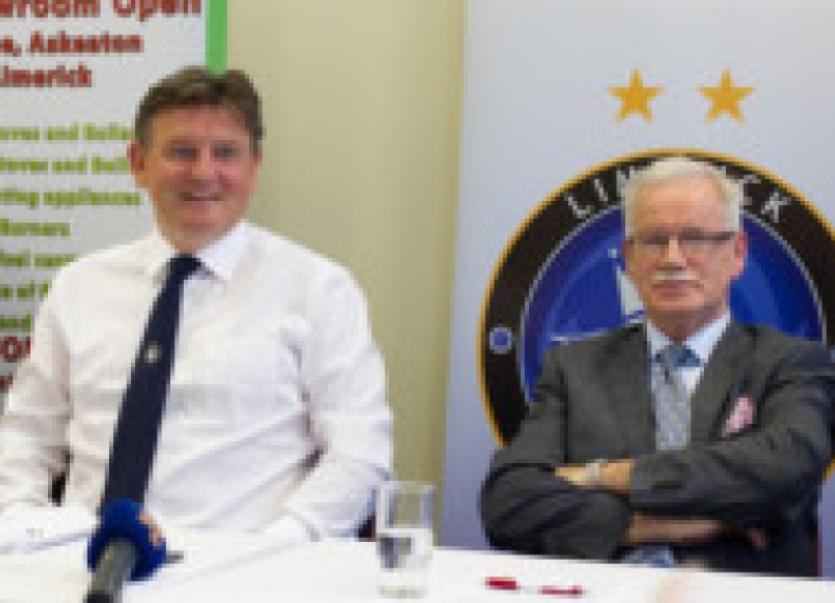 New Limerick FC manager Martin Russell insists the Blues won’t have to compromise on playing an attractive style of football in their bid to move up the SSE Airtricity League Premier Division table.

Russell, who takes over as Limerick boss from his assistant manager’s role at St Patrick’s Athletic, will be looking to quickly improve on their current league standing of eighth.

Limerick lost each of their three previous league fixtures under previous manager Stuart Taylor and the club will hope that the change in manager can help boost falling attendances at home games.

Russell was renowned for the attractive style of football his side played while the 47-year-old was in charge of UCD.

Martin Russell said: “The thing about playing attractive football, for me, it is a core element. But I would prefer to call it winning football. I don’t think you have to compromise on the winning by playing good football.

“They are the objectives I will try and get into the team. I am not expecting it to happen overnight, but we will be working towards it.

“UCD was one project. I tried to maximise the philosophy of the club when I was there. Limerick, for me, is a different one. Yes - we are going to develop our best players.

“You have also got more of an opportunity to be competitive in the league than I would have had with UCD. I am looking forward to that challenge as well.

“My ambitions, in a nutshell, is to progress things here at Limerick. We are looking up the table. We want to finish it off as positively and as well as we can. You can hear from the passion in Pat (O’Sullivan’s) voice, he wants the club to progress. I hope I can play my part in doing that.”

One of Russell’s most pressing issues will be to look at the possibility of strengthening the squad with the transfer window currently open.

Russell agreed: “We will look at that urgently. There is an immediate thing now with the window being open for this while to see what we can do. If we feel we can get the right type of player in, we may be able to do something. Everyone will have their chance.

“While we don’t have a competitive game this weekend, we will have the chance to have a look at the players, assess the players. That will continue through the season.

“The way Limerick work - things will be done in the right way. It is a case of assessing the squad, looking at if we can bring someone in and it fits the budget, we will do it. If there is a young player in the squad who needs to be given a chance, we will look at that as well.”

Russell, a former Belvedere and Manchester United youngster, played in midfield for Birmingham City, Leicester City, Scarborough and Middlesbrough in England before returning home to play for Portadown and St Patrick’s Athletic, winning league titles with both clubs.

After hanging up his boots in 2003, the former Republic of Ireland Under-21 International had spells as assistant manager at St Pat’s and UCD between then and 2008.

It was with UCD that Russell cut his management teeth in 2009 and he guided them to the First Division title, before helping them to preserve their top-flight status for the following four seasons.

This year, he rejoined the Saints as assistant manager to Liam Buckley, and he leaves the Dublin side in third place in the Premier Division.

Despite Limerick’s poor run of results in recent weeks, Russell remains upbeat about the side’s prospects for the remainder of the season.

“I tend to look upwards - look to the positive side of things, look for the next win and to get higher up the table. That is the way I will be until the end of the season. The players that are here realise - or should realise - with the way the club is trying to do things, they should want to be part of it. I hope that is seen in the performances between now and the end of the season as well as the players we want to bring on board to progress things.

“The league is competitive. Even the bottom sides can throw a spanner in as they have done. In the middle part and top part everyone is capable of beating each other. We need to get a consistency in our game and pick up more points between now and the end of the season and also playing good football.”

Russell said he hoped supporters would give him a reasonable amount of time to make an impact at the club.

“All I would ask is for a relevant amount of time to make an impact. We are all judged at the end of the day, but a realistic amount of time is all that any manager wants. We will take it from there.

“We have to be realistic, look at what has happened to date and see if there can be an immediate improvement between now and the end of the season.”