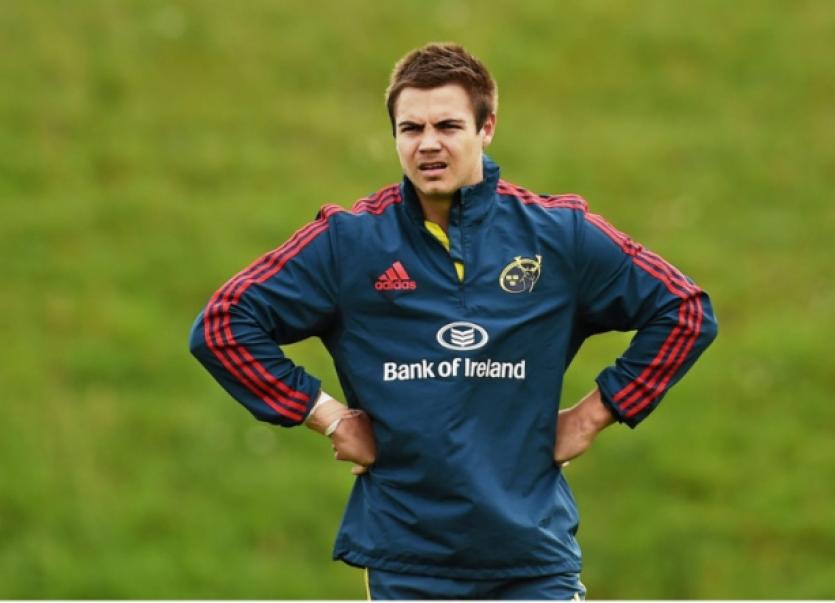 ASK Munster’s South African winger Gerhard van den Heever the best career advice he has received to date and he replies, “we cannot change the cards we are dealt, it’s how we play the hand.”

ASK Munster’s South African winger Gerhard van den Heever the best career advice he has received to date and he replies, “we cannot change the cards we are dealt, it’s how we play the hand.”

The dynamic 25-year-old arrived at Munster last November, but a combination of some niggly injuries and the time it takes to adopt to the different demands of Northern Hemisphere rugby has resulted in van den Heever making just eight appearances for the province’s senior side to date.

Van den Heever’s playing opportunities may have been limited, but the Munster public has liked what they have seen with his speedy, direct running style .

Van den Heever said: “I wasn’t happy at the start (at Munster) because I broke my hand and it wasn’t the start I really wanted and I struggled in a few games I didn’t play the rugby I wanted.

“The last few games I’ve got a lot of ball carries and a I got a lot of gain lines so I was chuffed with the last couple of games and I can only get better from here.”

Van den Heever moved to Munster from Western Province last autumn. He announced his potential as a quality finisher when making his debut in Super Rugby as a 20-year-old with the Bulls.

Van den Heever said he saw a brighter rugby future for himself in Ireland than South Africa offered when the opportunity to move arose last year.

“I think the ultimate goal for me is to qualify be a player to be accepted in the Ireland squad,” van den Heever said.

“I think that’s the main goal for me and I think it’s just a bigger future here for me in Ireland. To come and play the rugby with the guys that are playing here. It’s an expansive game for the weather we play in so it’s exciting rugby each week and it’s not just trucking-up rugby. It’s testing the guys skills and bringing out the best of you that you can be as a player.

“I got a contract with Western Province and they wanted to renew my contract but in Ireland there was a longer contract so I thought it is much better for my future to come here and play the best rugby I can.

I’m a bit frustrated with my performances at the minute. I don’t think I’m playing the best rugby I can. I’m not blaming injuries because that’s stupid stuff, I’ll just keep on working hard and focus on the weekends and be the best I can be and get involved and make a difference when I get the ball in my hand.

“It’s a bit awkward to come in the middle of a season and come push away the Rabo and stuff. After we have a good pre-season and you settle in to the whole preseason and you know all the battle plans it’s going to be much easier to put your own special abilities into the pattern.”

A Super Rugby winner with the Bulls in 2009, Van den Heever has been very impressed with the professional approach, both on and off the pitch, since his arrival at Munster.

“I think wearing a lot more clothes I guess is the main adjustment!,” he joked.

“No, Munster have a very professional set-up and I think you come to realise that when you walk into the Munster changing rooms, especially the gym in the mornings, the physios and the doctors, getting the best performance out of the players. They look after the players so well.”

The Limerick based winger has also been taken with Thomond Park’s match-day atmosphere.

Van den Heever said: “Thomond Park is a massive factor and it’s just an amazing stadium to play at. The crowd is much different here than it is back home.

“You can feel the atmosphere in the crowd and everyone is just cheering on the side. It is like there is 1,000 people on the field playing for Munster. It is just a great feeling.”

With Munster set to lose outside centre Casey Laulala to France at the end of the season, there could well be an opening for an existing squad member to force their way into the side in the 13 jersey for the marquee games next season.

It is a challenge van den Heever would relish.

“Yah, I think it is an opportunity for me to broaden my horizons at 13 and I think it would be a nice experience, a nice challenge for me to get a few chances,” he said.

“I just have to get the chance and see what I can do in the position.”

Van den Heever’s settling in period in Limerick and Munster has been made easier by the presence of two more South Africans, CJ Stander and BJ Botha in the squad. Van den Heever and Stander were previously team mates at the Blue Bulls in South Africa.

Multiple Currie Cup winner Van den Heever said: “CJ (Stander) and BJ (Botha) took me under the arm and made me very welcome here in Limerick and we have a lot of barbecues on Sundays if the weather holds up.

“There was a nice couple of Sundays recently where we had a nice BBQ. They keep me in tune with the team and tell me all the traditions and what the players like and what the people are like so it’s been quite easy to settle in for me.

“I’m planning to get married on the 25th of June so. I’ll just visit my family in Cape Town and Pretoria, where my mom and dad lives but most of it will be in Cape Town because it’s holidays and it’ll be nice to be at the beach.”

While his wedding next month will occupy van den Heever’s thoughts in June, of more immediate concern to him and his Munster team mates is Saturday’s visit of Ulster to Thomond Park for their final round RaboDirect PRO12 clash.

Munster maybe already assured of their place in the PRO12 play-offs, with Glasgow likely to be confirmed as their opponents following this weekend’s final series of games, but that won’t lessen the intense nature of the rivalry that exists with Ulster this weekend.

Van den Heever, who also played for the Stormers in Super Rugby, said: “Ulster is a massive game, never really played Ulster before. It was not our best performance I think the last time we played Ulster and we can expect a lot better than that this weekend. As well we’re playing at Thomond Park so it’s unacceptable for us to lose here.

“The South African guys that play for Ulster are a bit older than me so I didn’t really play with them!

“I know Ruan Pienaar and he’s in a class of his own. He is a really good player. He’s one of the best scrum halves in the world. You can see he’s an outstanding person as well.”

Van den Heever says self belief and discipline will be key ingredients in determining whether his time with Munster ultimately proves successful.

Van den Heever said: “I think it’s just a matter of self belief and discipline to make a success of yourself here. Put your body on the line every week and be for the team and making the team succeed. It is important. It’s not you that’s important, it’s the team that’s important.”