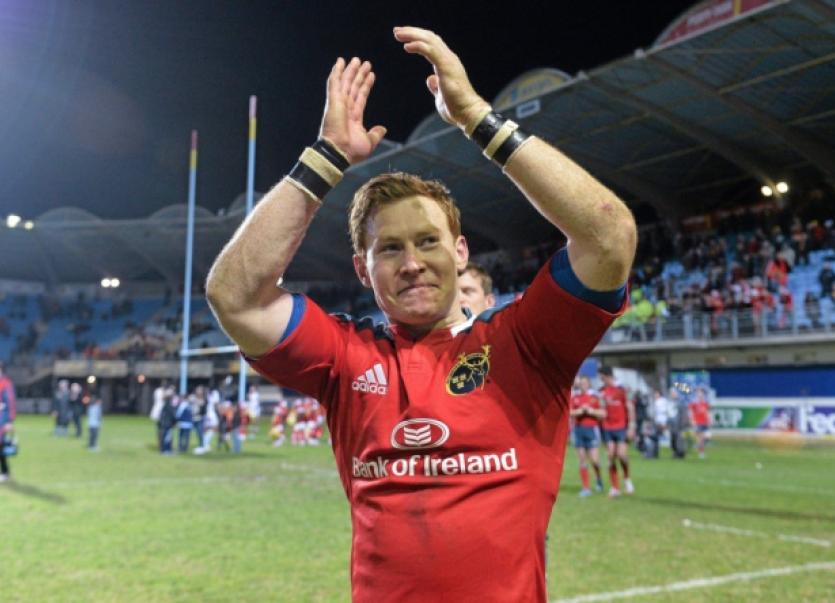 MUNSTER scrum-half Cathal Sheridan is hoping the side has created its own piece of Heineken Cup folklore on the back of their dramatic late victory over Perpignan in France.

MUNSTER scrum-half Cathal Sheridan is hoping the side has created its own piece of Heineken Cup folklore on the back of their dramatic late victory over Perpignan in France.

Sheridan made his first start in the Heineken Cup as Munster scored a thrilling 18-17 victory, thanks to a dramatic late try from the scrum-half’s UL-Bohemian’s clubmate, JJ Hanrahan.

Munster are now five points clear of Gloucester at the top of Pool 6, following the ‘Cherry and Whites’ shock defeat to Edinburgh at Kingsholm.

Sheridan agreed Saturday’s occasion was a big one for him as he started a Heineken Cup game for the first time with Conor Murray ruled out through injury.

Sheridan said: “Today was huge for me. I could try and act cool and say, ‘ah, I will take it in my stride’, but it was a massive thing.

“It was a case in point out there today. The scrums were incredible. When we got going in the backs, we looked dangerous. A few errors and things like that left us down. But it was great.

“On a personal note, my father travelled over for the game. It was great to have him here. He was running up and down the sideline with a flag. He was going a bit crazy. On a personal note it’s great.”

Twenty five-year-old Sheridan said: “After the try they scored late on, we all tried to gather ourselves. It was bit heart wrenching to see them go over in the corner.

“In fairness, everyone was quite calm, Paulie (Paul O’Connell), Keats (Ian Keatley) talked about the next play, what we were going to do next.

“It didn’t exactly go to plan at the next scrum either. But you have to keep playing. That is what we did. Lucky enough we got over in the corner.

“As a young fella you grow up watching a game like this. The work ‘folklore’ is often used about Munster in Europe. I think this is another one to add to the collection. At least I hope it is because it’s my first real involvement in it. I really got a sense of it.

“All you had to do was see the supporters. The support that travelled over was absolutely incredible. I don’t think you can put a price on that.”