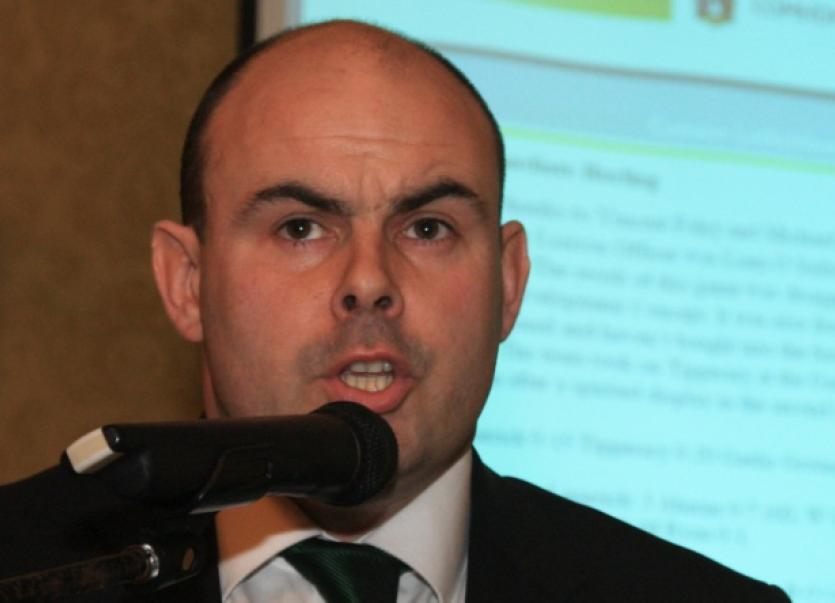 LIMERICK GAA is being held back by “people operating on personal agendas” according to County Board secretary Mike O’Riordan.

LIMERICK GAA is being held back by “people operating on personal agendas” according to County Board secretary Mike O’Riordan.

The full-time official made the comments in his report to Annual Convention last Sunday in the Castle Oaks Hotel in Castleconnell, which was attended by over 130 club delegates.

“I still have one serious concern and that is that it seems there are still people operating on personal agendas and not on a unified concerted effort to buy into the bigger picture to continue to build a strong foundation in our underage structures and further develop these improvements right up to senior level,” said O’Riordan.

The secretary also raised a number of other concerns.

The secretary feels that the county intermediate hurling team could be doing better.

“The result of this game was disappointing and I think there will have to be a re look at the Development Concept,” said O’Riordan of the loss to Tipperary.

“It was also frustrating that some few clubs won’t release players to this panel and haven’t bought into the further development that players will receive at this level. The team took on Tipperary at the Gaelic Grounds before the Senior game and were beaten after a spirited display in the second half by five points.”

O’Riordan has also raised concerns about the future of the county junior football team. “Every year I ask about the benefits of having a junior football outfit. I am still not convinced and would be more in favour of maybe increasing the senior football panel to include the best players from the previous year’s minor team. Bringing them in to learn their trade for a few seasons and gaining sufficient experience before establishing themselves on the senior football match day 26,” said O’Riordan.

He added: “This year’s team were beaten by the eventual All Ireland champions Cork in the Gaelic Grounds by eighteen points”.

The words of O’Riordan were echoed by Football Committee secretary, Colette O’Grady in her Annual Report.

“Credit to the players that lined out on the day. Every effort was made by the management to field our best team and a number of games were played in the led up to this game,” said O’Grady.

“However, due to a complete lack of interest from some players and clashes with club commitments it was again virtually impossible to make progress. Several of our U-21 squad if they are serious about developing and eventually playing senior football should be progressing on to the junior squad, but it is apparent that playing junior football for Limerick isn’t fashionable for some,” said O’Grady.

Regarding football, Mike O’Riordan wants to explore possible changes to the remit of the Football Committee.

“I am continually saying the Football Sub Committee should be developmental based rather than administrative based. The initial work with the underage teams has begun in particular with our link with LIT for our underage development squads. I think it has to go further back and an overall look has to take place with clubs and their link with the schools and development squads should be to the fore. With the change in the rule in relation to the appointment of sub committees there is an opportunity to maybe bring in new people with new ideas and I would not restrict the numbers on the provision,” said O’Riordan.

He added: “There would be a defined criteria set out which should include winning a Munster minor championship within a specific period of time”.

Overall in his 30-page report, O’Riordan reported a positive year for Limerick hurling.But he warned of resting.

“We cannot sit still however and reviews have already taken place to see how we can continue to improve and to compete with other hurling counties,” he said of the underage development squads.

“Huge credit is due to Bord na nOg, the players and their parents and the underage management teams for all the effort and dedication to Limerick underage hurling in the past year.”

Amid the positivity was some lament for opportunities lost.

Speaking of the All-Ireland semi-final lost to Clare, the secretary said: “The match was hugely anticipated only for our hopes to be dashed with a superb second half display from Clare, beating us by seven points”.

“This was a huge opportunity lost in my opinion with a number of players having an off day.”

Likewise in the League Final loss to Dublin.

“This was a game Limerick should have won as they dominated the game right through only to lose by a single point,” said the full-time secretary.