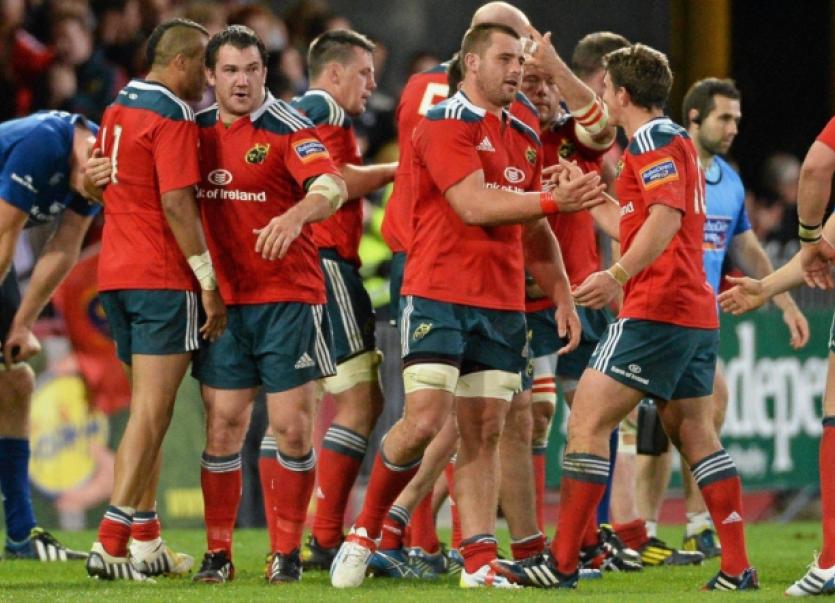 MUNSTER ended a four-game losing run against arch rivals Leinster when emerging with a 19-15 victory in their RaboDirect PRO12 clash at Thomond Park on Saturday night.

MUNSTER ended a four-game losing run against arch rivals Leinster when emerging with a 19-15 victory in their RaboDirect PRO12 clash at Thomond Park on Saturday night.

The home side’s win also deprived Leinster of the chance to achieve three successive wins on Munster soil for the first time since 1971.

Next up for Munster is their opening Heineken Cup pool fixture away to Edinburgh at Murrayfield on Saturday next at 1.35pm. Below are five main talking points to come out of Saturday evening’s win over Leinster.

Beating Leinster at any time provides a major boost in confidence to the Munster players, but even more so on this occasion. Having failed to beat Leinster since the 2011 Celtic League Grand Final, Munster were desperate for success in front of their home support on Saturday evening. Not alone did the win move Munster up to second place in the RaboDirect PRO12 table, but it is perfectly timed ahead of the start of the Heineken Cup next weekend.

Judging the attendance figure for last Saturday night’s game on previous years, 20,646 was somewhat disappointing. However, in the context of the PRO12, it was a very impressive figure, more than twice the attendance of the next best-attended Celtic League fixture from the weekend, the meeting of the Ospreys and Ulster at Liberty Stadium on Friday night.

Saturday’s win over Leinster will have renewed the confidence of Munster’s supporters as well as players and ensured the ‘full up’ signs are likely to be up for the home Heineken Cup pool match with Gloucester on Saturday week.

One of the biggest pluses for Munster for the weekend win over Leinster was the display of Keith Earls. Not alone did the Limerickman score a crucial first half try, but his overall display was top class. Earls is a real confidence player and right now his levels of confidence are sky high. The 26-year-old’s display on the right wing will put the debate over whether his best position is on the wing or in the centre for the foreseeable future at least. The performance will also boost his hopes of seeing game time for Ireland in the upcoming November internationals.

Munster coach Rob Penney was anxious to give as many squad members game time through the opening weeks of the season to ensure that players were able to cope with the demands of the PRO12 in the absence of the province’s internationals stars through the November internationals. The plan has worked a treat. The likes of prop James Cronin has boosted his claims for further game time in the marquee fixtures, while the form of Ian Keatley, JJ Hanrahan, Cathal Sheridan, Dave Foley, John Ryan and Duncan Williams has been impressive.

Despite the unfortunate head injury picked up by team captain Peter O’Mahony in the opening half of Saturday’s inter-pro clash, Munster’s injury worries have reduced significantly in recent weeks. That is welcome news as the season cranks up a gear. Conor Murray and BJ Botha both made successful returns from injury when introduced as second half replacements in Saturday’s game. And equally importantly, second row Paul O’Connell and full-back Felix Jones got further valuable game time under their belts having recently returned to action after lay-offs.