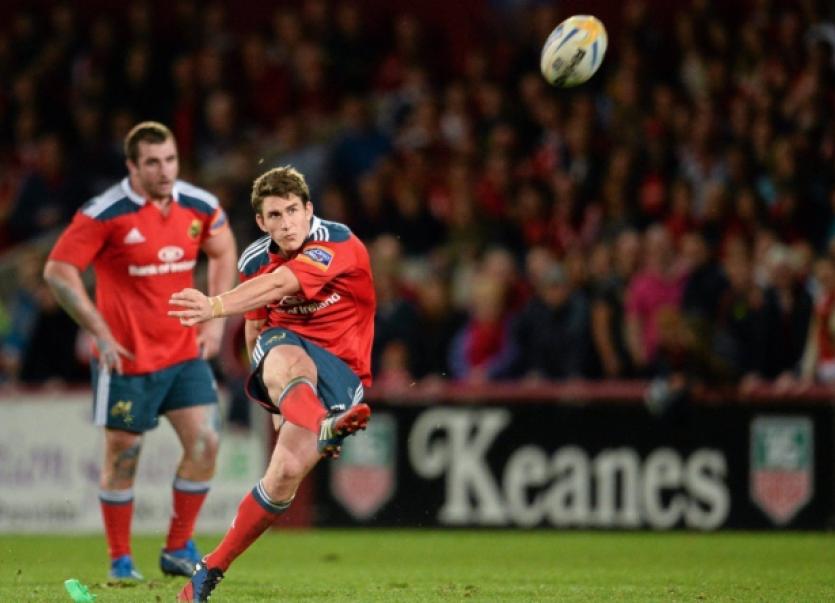 MAN of the Match, Ian Keatley is relishing his shot at being first choice out-half at Munster, following Ronan O’Gara’s departure this summer.

MAN of the Match, Ian Keatley is relishing his shot at being first choice out-half at Munster, following Ronan O’Gara’s departure this summer.

Coach Rob Penney has indicated that 26-year-old Keatley is his choice of starting 10 through the opening part of the season.

And to date Keatley has repaid the Kiwi’s faith in him, despite the pressure being applied for the starting berth in the marquee fixtures by an in-form JJ Hanrahan.

Keatley said: “I’m looking forward to the year. It was actually great my first year to be standing behind Rog (Ronan O’Gara) and learning from him.

“He has got so much experience and he has been a fantastic servant to Irish rugby for the past ten years, but last year I kinda felt I was pushing him a bit and in fairness Rob (Penney) said to me ‘you are just unlucky it is Rog in front of you’.

“In fairness Rog, in the big games, he came up trumps for us and you can’t have any complaints about that. I felt last year I was pushing Rog and this year hopefully I can step up.

“They are big shoes to fill but I’m not trying to be Rog, I’m trying to be Ian Keatley and I play completely different to him.

“JJ (Hanrahan) and I are both based in Limerick and we go out kicking nearly every day. We have a really strong relationship bot off and on the field.”

Indeed, O’Gara sent a text message to the squad prior to Saturday evening’s game with Leinster, wishing them the best of luck.

Keatley agreed that winning Saturday night’s derby meant a great deal to Munster’s Leinster-born layers but only because they were beating the nation’s top-ranked province.

Keatley added: “Leinster are seen as the number one team in Ireland and you want to beat them, it is a simple as that.

“Like, I didn’t get let go by Leinster I decided to leave them because I thought it would be a better career path at Connacht.

“At the time Leinster had Sexton, they had Contepomi and they had just brought in Nacewa who, I was told, was going to be played at number ten.

“I weighed up my option and decide it was best for me to leave. So I didn’t begrudge Leinster, they didn’t let me go, I choose to leave.