Three sent off as Limerick FC draw with Drogheda 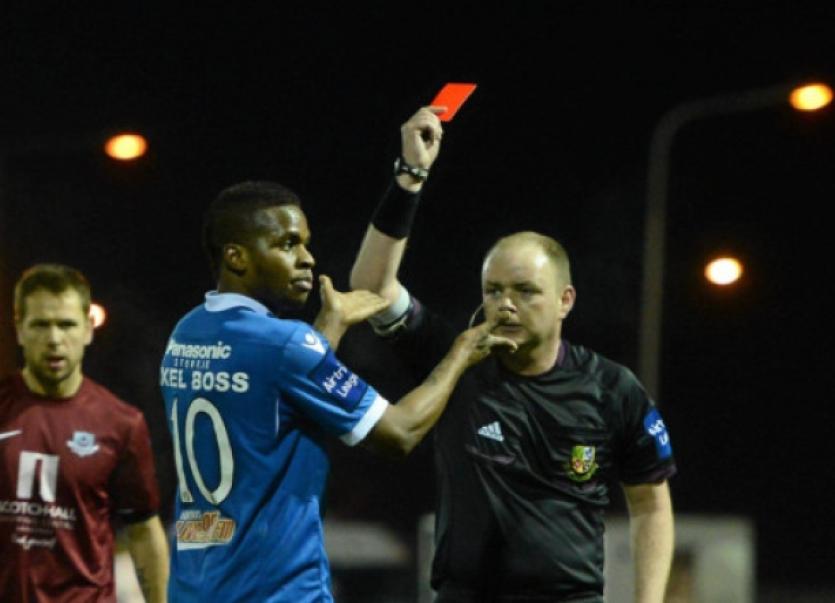 Limerick FC had three men red-carded - including manager Stuart Taylor - as they drew 2-2 with Drogheda Utd in a dramatic game in Hunky Dory Park on Friday night.

Limerick FC had three men red-carded - including manager Stuart Taylor - as they drew 2-2 with Drogheda Utd in a dramatic game in Hunky Dory Park on Friday night.

Four penalties - three to Drogheda. Two red cards - both to Limerick. Four goals - two apiece. A manager sent to the stands - Stuart Taylor. And one point apiece for Limerick FC and Drogheda Utd on a truly astonishing night in the wonderfully-named Hunky Dory Park.

Limerick came through their first taste of adversity - on their first away match of a long awaited return to the Premier Division - with flying colours.

Down to nine men, with their manager also sent off, Limerick battled bravely to return form Boyneside with a point.

While last week’s match was all about the style of play that earned Limerick many plaudits, this game was all about guts and resilience.

Droheda went ahead inside 10 minutes courtesy of a harshly awarded penalty. Stephen Folan attempting to keep the ball on the deck as per Limerick’s footballing philosophy lost possession in a dangerous area.

The quick thinking Ryan Brennan immediately capitalised on the sloppy defending by backheeling the ball for the onrunning David Cassidy to lauch an effort on goal. Captain Joe Gamble had tracked the run from midfield and launched a last ditch attempt to block the shot.

Drogheda were on top for large parts of the first half and Limerick battled hard to keep the score at 1-0. Danny Galbraith and Axel Bossekota were once again dangerous on the break when Limerick were able to get the ball up to them.

Limerick began to gain a foothold in the match towards the end of the first half and a beautifully curled left foot cross from Shane Tracy found new signing - the giant centre half - Aaron Browne unmarked and he headed low into the bottom corner.

Limerick happily headed for the dressing rooms for half time, level at 1-1, but unaware of the drama that was to unfold after the break.

Straight after kick off for the second half the ball was sent towards the Drogheda keeper and unaware of his position he caught the ball on the edge of the area. The referee adjudged the incident to have taken place outside the box and booked Drogheda keeper Gabriel Sava.

That was only the beginning of a truly astonishing second 45 minutes. A poorly judged headed back pass from Robbie Williams allowed Declan O’Brien through on goal. Browne had little option but to hack him down and duly received his marching orders.

Barry Ryan was once again the hero diving to his right to save O’Brien’s effort. Stuart Taylor caught up in the passion of proceedings was sent to the stands by referee Graham Kelly as he protested the sending off of Browne.

With both sets of supporters now fired up, the match was going from end to end. Danny Galbraith - once again a stand out on the night - jinked and turned his way into the Drogheda box before being hacked down.

The reliable Shane Tracy stepped up to drill the ball into the corner of the net. Unbelievably Limerick, down to 10 men, were now 2-1 up.

Bossekota let himself down by getting drawn into an altercation after winning a free kick and was sent off for an altercation with a Drogheda defender. The fervent travelling Limerick support were now at fever pitch as they willed Limerick on to a first three points of the season.

Playing the last 20 minutes with nine against 11 was always going to be a near impossible task and incredibly Drogheda were awarded their third penalty of the night when Brian Gannon was felled in the area.

O’Brien made no mistake with his third effort from the penalty spot and Drogheda were level. Limerick still had four minutes of normal time and three minutes of injury time to hold onto a priceless point.

Right at the end Drogheda had one last chance to snatch all three points but to the relief of Blues’ fans Drogheda spurned the free header and ball barely drifted wide.

“It was an entertaining game of football no matter how you look at it,” said Limerick boss Taylor afterwards. “It had sending offs, it had goals, it had everything.”

Speaking of his own dismissal he said: “I think so (about being sent off), it’s a pasionate game, it’s emotional.”

On Bossekota’s dismissal he said: “It’s a learning curve for Axel, he’s come over here and he’s still young but he will learn from it.”

Limerick now have little time to rest up after this encounter as they welcome UCD to Thomond Park on Tuesday night. UCD were beaten 6-0 BY Derry City on Friday night and are still awaiting their first point having lost to Bohemians in the opening round of fixtures.

The other results of the night saw Shamrock Rovers beat St Patrick’s Athletic 3-0, Derry City had a 6-0 win over UCD in Belfield, Cork City beat Bohemians 2-1 and Dundalk had a 3-1 win away to Shelbourne. Sligo Rovers play Bray Wanderers in the final game of this round on Saturday night.