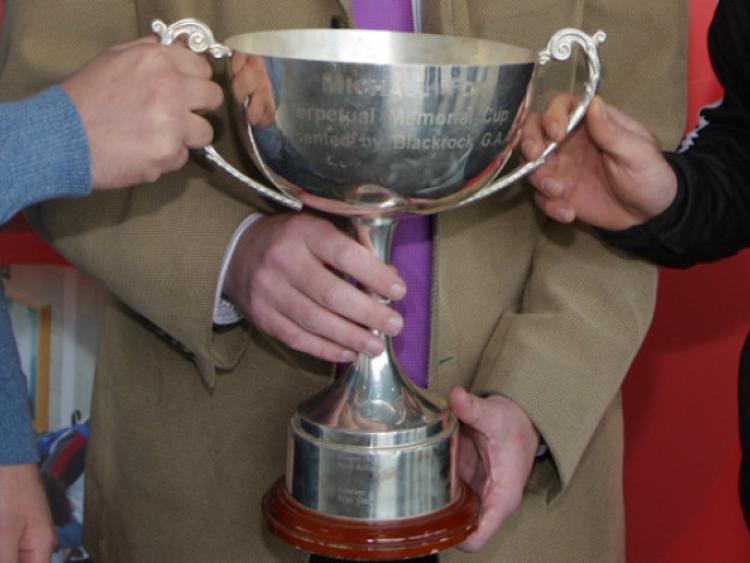 It was 2-4 to 0-5 at half time for the Steve McDonogh managed side.

Knockainey started second half well but a Donal Deady goal (43th minute) made it 3-4 to 0-8.

A Mike Fitzgibbon goal after nine minutes had Feohanagh up 1-2 to 0-1. After 20-minutes the lead was 1-8 to 0-3. But Cappamore scored six points before Andy Murphy’s goal have them lead with last puck of the first half.

But Tommie O’Donoughue’s goal in the 52nd minute put Cappamore up 2-14 to 2-11 and they finished strongly to claim the title. Joe Longeran finished with 0-8 (6frees) for the winners.

Dromcollogher-Broadford recovered from a seven point half time deficit to win the Junior A Hurling title by a point against Na Piarsiagh, 1-16 to 4-6

Two frees from Derry McCarthy in the final minutes of the game gave Drom-Broadford a dramatic win.

Na Piarsaigh hit four first half goals that came from Conor Boylan (2), Pat McCarthy and Gordon Leonard. That gave the city side a 4-2 to 0-7 half time lead. Derry McCarthy hit 0-6 of Drom-Broadfords total.

Na Piarsaigh’s lead was whittled down to four points thanks to scores from Tom McLoughlin and two McCarthy frees before Ray Lynch goaled to leave a single point between the sides. Another McCarthy free and an excellent point from Damien Lacey levelled the game with 13 minutes remaining. Dylan Cronin gave Na Piarsaigh the lead with four minutes left before McCarthy intervened to get Drom-Broadford level and then the lead for the first time since the opening minute. A lead that Na Piarsaigh could not claw back. Drom-Broadford now play Kerry’s Dr Crokes in the Munster club JAHC.

Cappagh will be playing intermediate football in 2016 after a five point win over Galtee Gaels, 4-10 to 3-8.

Seamus O’Carroll was their star man scoring an impressive 2-6 of his sides total of 4-10. O’Carrolls first goal came after his left footed miss-hit shot looped over PJ Moloney in the Galtee Goals after 11 minutes. His second goal came four minutes later. Moloney saved O’Carroll’s penalty but the half forward was first to react and buried the rebound. A shell shocked Galtee Gaels hit five points in a row to leave the half time score 2-5 to 0-6 in Cappagh’s favour. Tommy Stokes notched another goal for the west Limerick side four minutes into the second half. Despite their best efforts of a comeback, Galtee Gaels had too big a mountain to climb. Sean Casey goaled to give Galtee some hope but Richard Shorten’s sublime left foot finish sealed the win for Cappagh. Robert Childs scored two goals from penalties either side of Shorten’s effort could not deny Cappagh a deserved win.

Monaleen went one better than last season with their 3-9 to 1-13 final win over Granagh-Ballingarry under the floodlights of the Gaelic Grounds on Friday evening.

Beaten in the final last year by Doon, Monaleen were 2-6 to 0-6 up at half time with Alan Kitson and David Hennessy getting their goals.

John O’Grady frees kept Granagh-Ballingarry in touch but a goal from a long range shot from wing back Darrell Smith had Monaleen 3-6 to 0-10 clear entering the final quarter.

Their was a late late Kevin Forde goal for the west Limerick men but Monaleen held on for victory.

A goal in either half from Liam Griffin set them on their way to victory.

A Cillian O’Reilly goal started a late Balybrown fightback but Kildimo-Pallaskenry held for the deserved win.

Ballylanders were 1-10 to 1-8 winners over Athea in their replayed final.

*See the weekend print edition of the Limerick Leader newspaper for full match reports and photographs from the double-headers in Kilmallock, Bruff and the Gaelic Grounds.