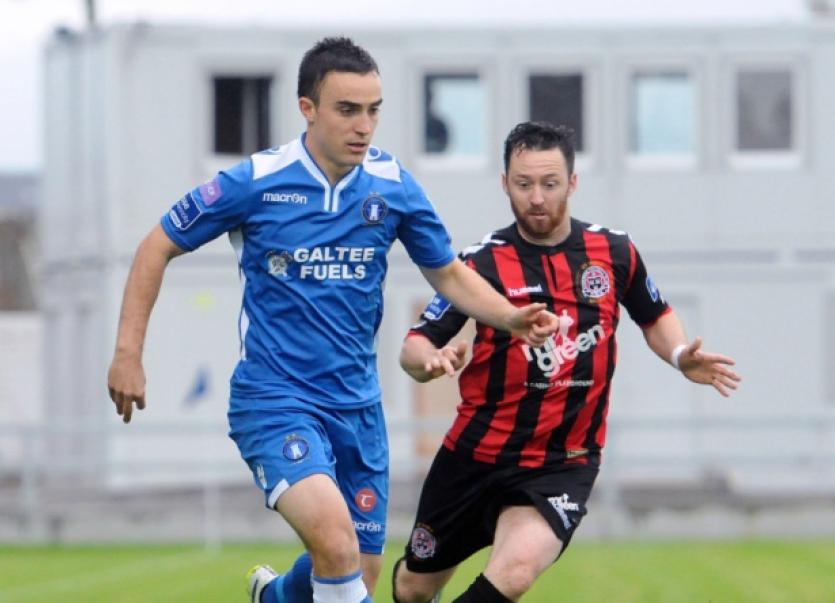 Tracy’s 75th minute goal from the penalty spot, which went in off an upright and the back of Bohs’ keeper Dean Delany helped the Blues bag a priceless three points in their Premier Division survival bid on Saturday night.

Afterwards, a delighted Tracy said of the seven-goal thriller at the Markets Field: “It was definitely one of the most incredible games I have played in. I said that when it went 3-3. I turned around to one of their players, ‘this is some game’. To go on then and get the winner was even better.

“The result will instil a lot of belief. We are four points behind after Sligo’s defeat to Cork City. But we are concentrating on ourselves at the moment and if we can keep putting in performances like we did second half. I think we have a great chance of surviving at the end of the year.

“It is just brilliant. To go down to 10 men like that at the start of the second half and win the game 4-3 shows the character in the side.

“We were very disappointed with the first half even though we went 1-0 up. They came back and scored from a set piece.

“We felt we hadn’t played well in the opening half, but to come out and play like that after the sending off was brilliant.

“I suppose it is a bit down to the confidence we got from winning for the first time last weekend. Training was bouncing all week. You could see that. It was a bit livelier. But to me it just shows the character that is in the squad.

“To be on the run we were on and to bounce back like we did in that way, being a man down, is brilliant.”

Twenty six-year-old former Arsenal youngster Tracy praised the Limerick supporters for the way in which they got behind Martin Russell’s side in their hour of need.

“The support we had was excellent again tonight. Even when we were 2-1 down and got the equaliser, it felt like there were 4,000-5,0000 there with the noise levels.

That’s what we are going to need for the rest of the year. The fans could see the effort we were putting in even though we were behind. To be fair, in the second half, we played good football. We looked to get on the ball, especially Lee J (Lynch), Duggie (Shane Duggan) in the middle of the field. They got us playing. We need that level of support every week.”