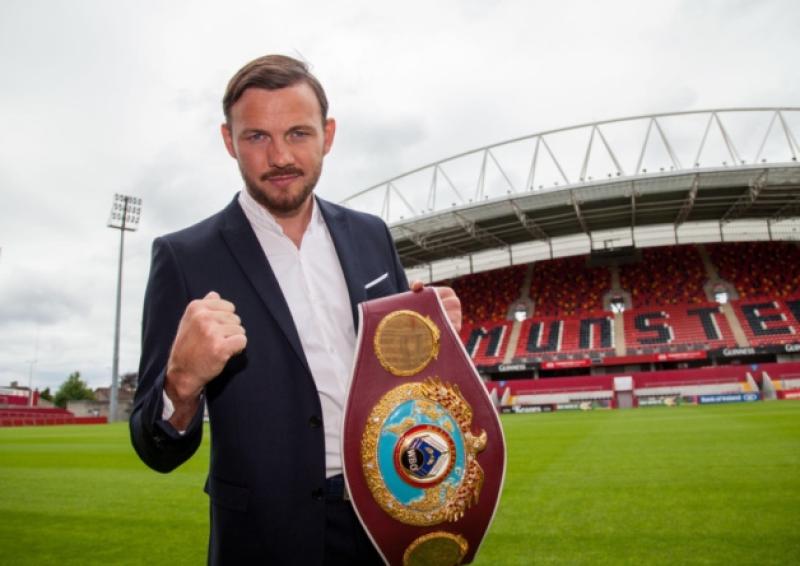 LIMERICK is in shock this Wednesday night following the dramatic confirmation that illness has forced local sporting hero Andy Lee to cancel his historic world title fight at Thomond Park.

LIMERICK is in shock this Wednesday night following the dramatic confirmation that illness has forced local sporting hero Andy Lee to cancel his historic world title fight at Thomond Park.

The WBO middleweight champion was due to live out his dream on September 19 with a world title defence against Billy Joe Saunders in the home of Munster Rugby.

More than 30,000 fans were expected to witness the occasion but now plans have come undone and the fight is to be moved to Manchester on October 10.

It is understood that October and November dates in Thomond Park were thought to be too risky given the weather conditions for an outdoor event and also didn’t fit smoothly into the world boxing calendar.

“Obviously, Andy and I are gutted that this won’t be taking place in Limerick. If the virus had cleared, then maybe it could have. However, after speaking with Frank Warren, my partner in the event, we decided that the risk was just too great on many fronts. We now move forward with a new date, a new venue, and like Frank, I have had many great nights at the Manchester Arena and we are looking forward to another,” said Booth.

Final confirmation of the cancellation only came late on Wednesday evening with interested parties actually due in Limerick for planning meetings on Thursday morning.

Mayor of Limerick Liam Galvin described the news as “a huge blow to everyone in the city. People were very much looking forward to it, it was going to be massive for the city. I know the hotels were booked out but I am most sorry for the fans who had booked hotels and bought tickets.”

Details for ticket refunds are to be announced in the coming days, with Adam Booth and Frank Warren stressing that ticket sales were on course for a sell-out.

Promoter Warren confirmed details of the Manchester event, stating: “It’s a shame for Andy Lee that his dream of defending his world title in Limerick cannot be fulfilled now, but this being such a big fight neither boxer can risk going into the ring at anything less than 100%. Also, from Billy Joe Saunders’ point of view he is in training camp in Spain and to not have a firm date for the fight would not be fair on him so Manchester is the best solution.

“I’m sure it will sell-out with such a huge card taking shape. I’m proud to have staged the top three boxing events at the Arena and I think this one could certainly equal or surpass those,” said Warren.

Warren’s upbeat words, however, will come as scant consolation to the people of Limerick, who had been looking forward to a historic night.