Bleyendaal keen to make up for lost time at Munster 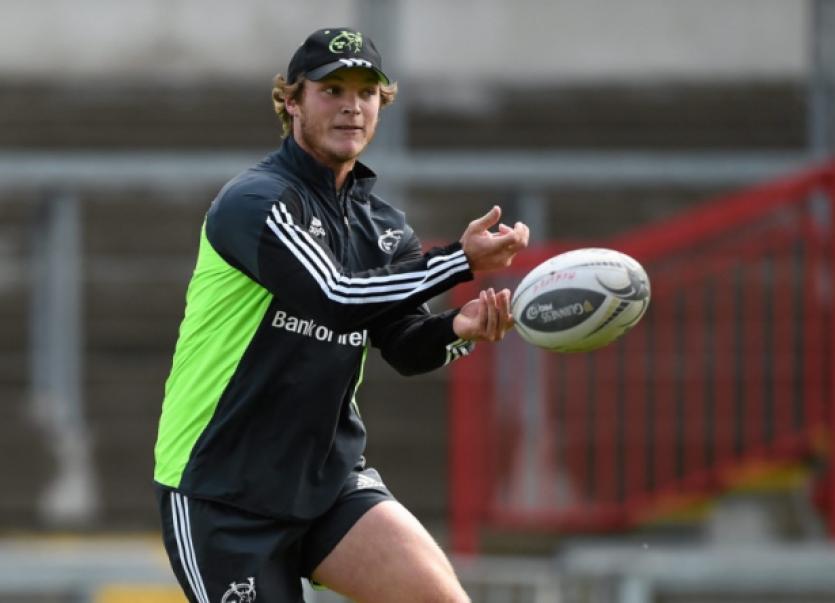 Was it scary for you at one stage with the neck injury, was it career-threatening ?

Tyler Bleyendaal: “Look, I was confident with the medical staff and the team we had back home. The surgery went well. I was just relieved to get the pains I was feeling gone. The rehab has gone really well so I never feared for anything. It is just patience.”

It has been a long 12 months for you since the injury?

TB: “Yeah. Obviously, I came over here mid-winter. I trained for a few months at the end of last season. I have done a lot of training. But as rugby players we like to play. That is our reward for working hard and I haven’t had that yet, so I am excited for the season.”

What exactly was the injury?

TB: “I had a cervical disc blew out, so I had it replaced. It is feeling strong now.”

Have you had to do a lot of work to build that area of your neck up?

TB: “Yeah. One is time for it to recover, just for the bone to grow, obviously strengthening the neck around it. It has all gone well.”

How has the injury cleared up?

Was it frustrating last season to be training, but not playing games?

TB: “Not at all. I really enjoyed helping the team. We made it to the final. We didn’t quite win it, but I enjoyed the journey.

“Coming in to Munster so late in the season I was just happy to fit in well and to be able to contribute. No it wasn’t frustrating.”

You did play a Munster A match against Ulster Ravens towards the end of last season. What was that like?

“It was great to get that feeling of playing rugby back. I was sore for a week, but I enjoyed it.”

You decided on the move to Munster before the injury?

TB: “Yeah. Munster were great. It (the injury) was an issue obviously because not being fit before you turn up, but they were great to me.

“They had faith and I joined the medical team over here and we have rehabbed it well. With a bit of luck I can contribute to this season now.”

How have you found the famous Munster dressing room slagging. Is it a bit daft in there at times ?

TB: “No, surely not! Not at all. They were a great bunch of guys. I will look out for it. They have been great to be fair. They have welcomed me in. I think we are developing nicely on the rugby pitch as well. It is going to be exciting.”

Have you a preference for playing out-half or centre?

TB: “I have probably played more at out-half, but I don’t have a preference. I am excited to play either position. I have been training at both and I have just enjoyed being in the mix.”

Why did you decide to give up a career in Super Rugby and possible All-Black selection to move to Munster?

TB: “I have all options available to me still. I decided opportunities awaited. I had never been to Europe. It was a good chance to see a different part of the world. Munster as a club has a lot of history.

“They are very successful. It is a great opportunity. I am hoping I can get some opportunity here myself and contribute to the team.”

Was Doug Howlett a factor in your move to Munster?

Have you been made aware that Munster beat the All-Blacks in Limerick?

TB: “I think it has been mentioned to me a few times! We will let them have it.”

What are the main differences between playing rugby in New Zealand and at Munster?

TB: “I think the weather plays a big part in how we play. You have a long winter, I guess, and there is a lot of wind and rain.

“I hadn’t played in a lot of that before. We don’t get wind and rain as often in New Zealand. We get some nice stuff as well. Play might tighten up a bit. I will find out as I go.”

You played with Dan Carter before. What influence did he have on your game?

TB: “You learn how he goes as a professional. He’s a dedicated trainer and he knows his game inside out. He can lead a team as well.

“I have taken some pointers, but obviously no one can replicate him. It is more just play what you can in your own game.”

Have you come across your new team-mate Francis Saili previously?

TB: “I did. I trialled with Francis in the under-age teams. He is a year younger than me, so we didn’t play on the same teams. Obviously, we played against each other as well. He is a great player.

What will he bring?

TB: “He is exciting. He has good pace and strength. He has a good mix of being able to ball play and kick and he is strong as well, so he can break tackles. I think we will enjoy having him.”

Did you come across Rob Penney in New Zealand?

TB: “Yes I did at Canterbury. I enjoyed playing under Penz. We were very successful. The games are totally different, the styles of play. If we can find a good balance I think that is where we need to get to.”

With Irish guys missing for World Cup there’s a big opportunity for other guys to stake a claim through the early months of PRO12 season?

TB: “There is. We wish all the Irish guys well. Hopefully there are many who make it into the squad. We already talked about it this year that it is going to be a squad. Through the year we need the whole squad. Guys are going to get opportunities and you have to make the most of them.”

How satisfying is it to have pre-season under your belt?

TB: “It has felt like I have had a pre-season since last November, back-to-back pre-seasons for me. I got through the end of last season, trained fully, so I got my break.

“I managed to go tour Europe which was nice. Now I have come back and we had a good six weeks. Everyone is excited just to get into the games.”

What are the cultural differences between living in Ireland and New Zealand?

TB: “I’m based in Limerick. I am with my girlfriend at the moment and Francis (Saili) is staying with me while he settles in For myself, there is not much difference between living in New Zealand and Ireland.

“Everyone is really friendly, so I have had no problems settling in. There is plenty of green countryside which I am used to from being down in the South Island. As you say the weather might be a bit more grey, but the culture is just as friendly.”