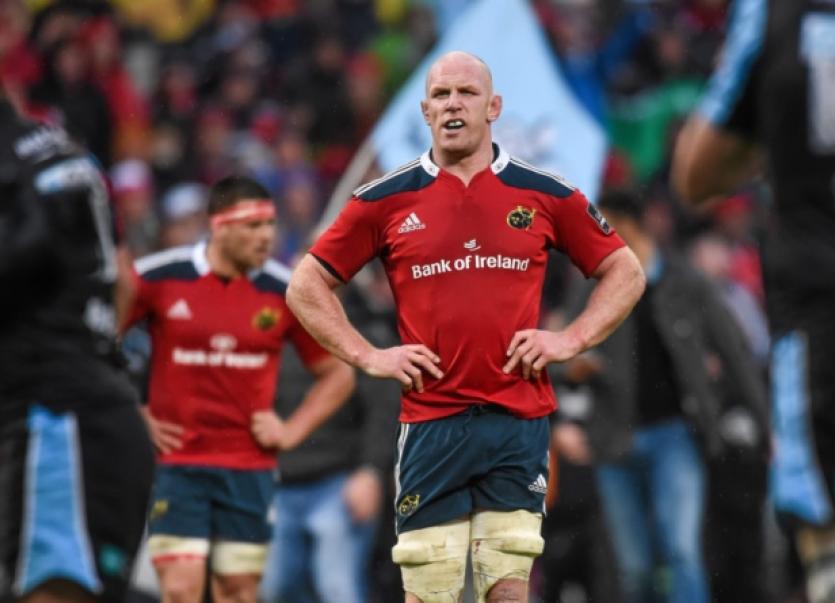 MUNSTER will look to recruit an overseas replacement for departing second row Paul O’Connell who played his final game for the province in Saturday night’s disappointing Guinness PRO12 final defeat to Glasgow in Belfast.

MUNSTER will look to recruit an overseas replacement for departing second row Paul O’Connell who played his final game for the province in Saturday night’s disappointing Guinness PRO12 final defeat to Glasgow in Belfast.

Head coach Anthony Foley has indicated that the province is likely to look abroad for a replacement for 35-year-old talisman O’Connell who is tipped to make a move to French Top 14 side Toulon this summer.

O’Connell has yet to confirm his playing plans beyond next autumn’s World Cup. When asked about his intentions after Munster’s weekend defeat to Glasgow in Belfast, he replied: “Summer off now and prepare for the World Cup.”

Munster head coach Foley faces a huge task in trying to find a replacement for O’Connell who played more than 170 games for the province over 14 years, including 64 as captain.

Foley said: “I think when we get to that situation we will probably have to go to the market.

“Then again we have the likes of Dave Foley, Billy Holland, Donnacha Ryan. You still have Donncha O’Callaghan. You’ve Sean McCarthy, John Madigan coming through so we have players we’ve earmarked for progression but in the competitions that we play in you need top players as well and Paul O’Connell is a top player.

“You’d like to believe that if you lose him you need to replace him. When I worked with Ireland a season or two ago, when he got injured, Donnacha Ryan stepped in and did a very good job at international rugby so there’s no question that Donnacha Ryan can do a job for Munster in that kind of role. But it will be a Donnacha Ryan role, not a Paul O’Connell role.”

For Munster to recruit an overseas second row, the province would require the go-ahead of the IRFU, whose Player Succession Strategy covering Munster, Leinster and Ulster allows for only three Non-Irish Qualified (NIQ) players plus one project player per province and just one NIQ per position across the three provinces.

With CJ Stander set to become Irish qualified in November and fellow South African BJ Botha out of contract in December, Foley believes he has some wiggle room.

Foley said: “We’ve BJ (out of contract) in six months so there is room there to wriggle around that. I don’t think this has ever happened before so it’s something that’s a question we probably need to ask. We’ll ask the question. I think that’s important, but it’s important that our foreign players when they come to the end of their careers that there’s people behind that are stepping up.

“I think you have that, a case in point Stephen Archer. He’s stuck in behind BJ Botha for the last three years and now he’s emerging as a fine tighthead in the latter stages of this year.”