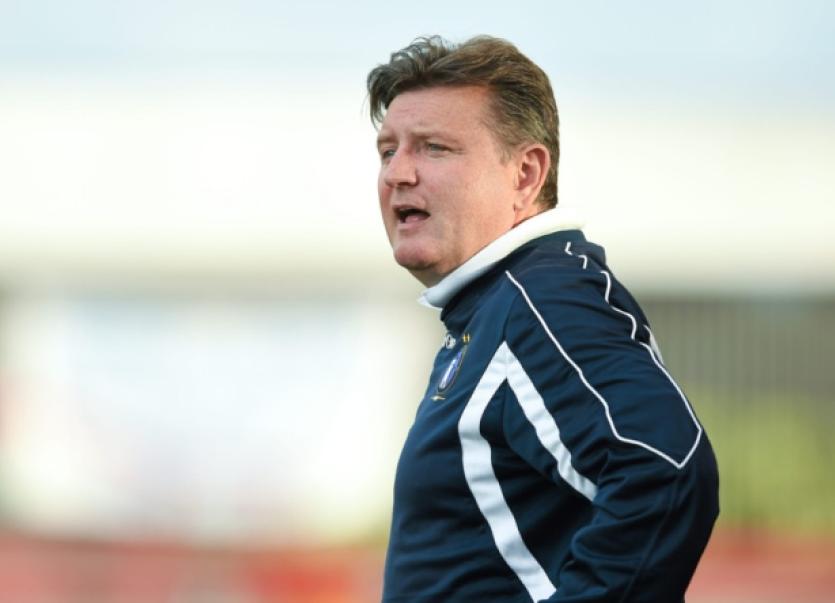 LIMERICK FC’S long-awaited comeback to the Markets Field ended in a frustrating 2-1 defeat to Drogheda United in their SSE Airtricity League Premier Division fixture played before 2,308 spectators on Friday night.

LIMERICK FC’S long-awaited comeback to the Markets Field ended in a frustrating 2-1 defeat to Drogheda United in their SSE Airtricity League Premier Division fixture played before 2,308 spectators on Friday night.

Clinical Drogheda Utd spoiled Limerick’s first game at the Garryowen venue in 31 years, thanks to goals in either half from captain Michael Daly and the precious winner from Lee Duffy on 54 minutes.

Paul O’Conor had equalised for basement side Limerick two minutes after the re-start, fuelling optimism among Limerick supporters that the Blues could finally record their first win of the campaign.

Referee Paul Tuite was none too popular with home supporters in added time as he waved play on when Drogs ‘keeper Schlingermann clattered into Man of the Match Dean Clarke inside the penalty area.

Kick-off was delayed by some 15 minutes on an otherwise special night at the Markets Field, in order to facilitate the large number of home supporters looking to access the venue. President Michael D Higgins was a special guest and he was introduced to both sets of players before kick-off.

Drogheda United took the lead on 13 minutes when Michael Daly’s glanced home a header, off the inside of the post, from Sean Thornton’s excellent free-kick. It was a poor goal for the Blues to concede, but poor marking has cost them dear through the opening 15 fixtures in the season

Limerick looked nervy during that opening period, but Martin Russell’s side settled well as the half wore on and created several good opportunities to equalise.

On 25 minutes, Dean Clarke fired just over the Drogs crossbar with a well struck effort. The home side were desperately unlucky not to draw level a minute later. Clarke skipped past Drogs goalscorer Daly and put in a low cross for Russell. However, his shot was brilliantly saved by Schlingermann and Drogheda scrambled the ball clear after follow-up effort from Clarke and O’Hanlon.

Drogs maintained their 1-0 lead to half-time, but the home side were level within three minutes of the re-start when Paul O’Conor headed home from Shane Tracy’s cross. It was Lims first league goal at the venue since Ger Duggan, father of current Limerick captain Shane, netted in the 3-2 win over St Pat’s in March 1984.

Limerick’s joy was short-lived, however, as clinical Drogheda made Limerick play for slack defending on 54 minutes with Lee Duffy firing the visitors in front with a well-placed effort as he cut in from the left hand side of the penalty area.

Limerick’s best chance of drawing level arrived in the 81st minute when Clarke’s header from close range was well saved by Schlingermann.