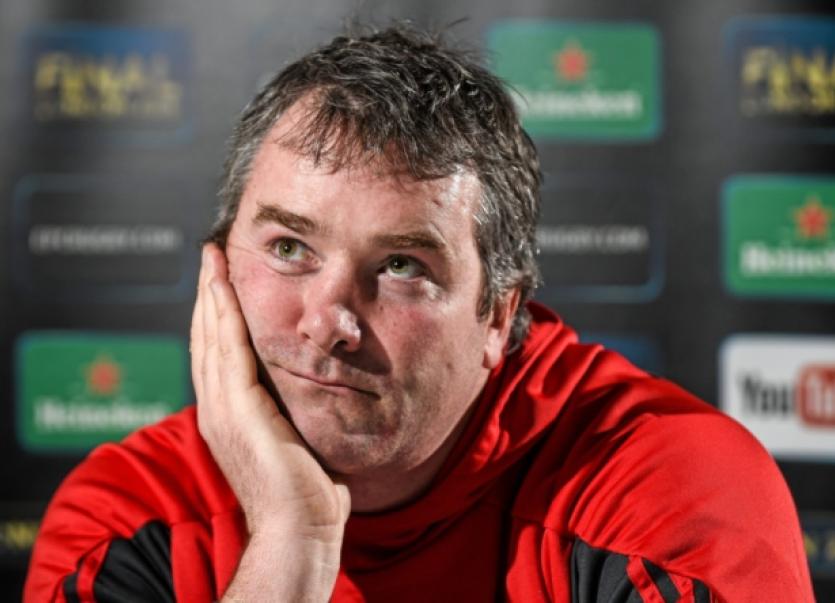 MUNSTER are in London this weekend for a season-defining European Champions Cup clash with Saracens at Allianz Park this Saturday, 1pm.

MUNSTER are in London this weekend for a season-defining European Champions Cup clash with Saracens at Allianz Park this Saturday, 1pm.

Munster must win their remaining two fixtures, and probably also need to pick up a try bonus point for good measure to be sure of advancing to the quarter-finals of the inaugural European Champions Cup. This Saturday’s game which will be refereed by French official Romain Poite will be shown live on BT Sport.

Munster head coach Foley insists the province’s proud record in terms of making European Cup quarter-finals will not be a major issue for the squad in the lead up to Saturday’s make-or-break clash.

Foley said: “We talk about how to win a game, we don’t look at the history books or what’s gone before.

“We understand that if we win the game it gives us another day out in terms of another opportunity, in terms of getting more points to get out of the group. That’s all it does.

“And that if we lose we are basically out, we understand that and we need to go about our job as if we are playing a knockout game, the same as if you have any sense of imagination when we were young fellas playing schools cup matches, ‘This is it, there is no tomorrow’.”

Munster who are looking to complete their 100th win in European club rugby competition have won five of their six previous meetings with Sarries.

However, bookmakers make Saracens odds-on favourites at 4/11 to win the tie, with Munster available at 2/1. Anthony Foley’s side can be backed with a six-point start on handicap betting.

SARACENS warmed up for Saturday’s do-or-die clash when losing to Gloucester in the Aviva Premiership at Kingsholm on Friday night.

A last-gasp penalty goal from the boot of James Hook guided the ‘Cherry and Whites’ to a dramatic last gasp success.

Saracens were dealt a blow ahead of the game with influential lock George Kruis ruled out of the game having received a three-week ban for a dangerous tackle. Kruis pleaded guilty after being cited for a tip tackle on wing David Halaifonua in Friday’s 24-23 defeat at Gloucester.

Saracens are boosted, however, by the return of England international centre Brad Barritt to their squad after injury. Barritt is tipped to make his first appearance since the autumn in the critical European showdown at Allianz Park.

Munster captain Peter O’Mahony admits the fear of being knocked out of Europe in January is a major motivating factor ahead of the big game.

Speaking on the pressures experienced by payers in the lead up to such a make-or-break fixture, O’Mahony said: “I’d say a lot of fellas react differently. I’d say we’d probably be a little bit more difficult to live with, crankier is a way to put it, but it’s a good sign I suppose.

“I think it’s a good sign. Pressure’s a good thing, especially putting it on yourself. Fear factor, all these things come into play.”