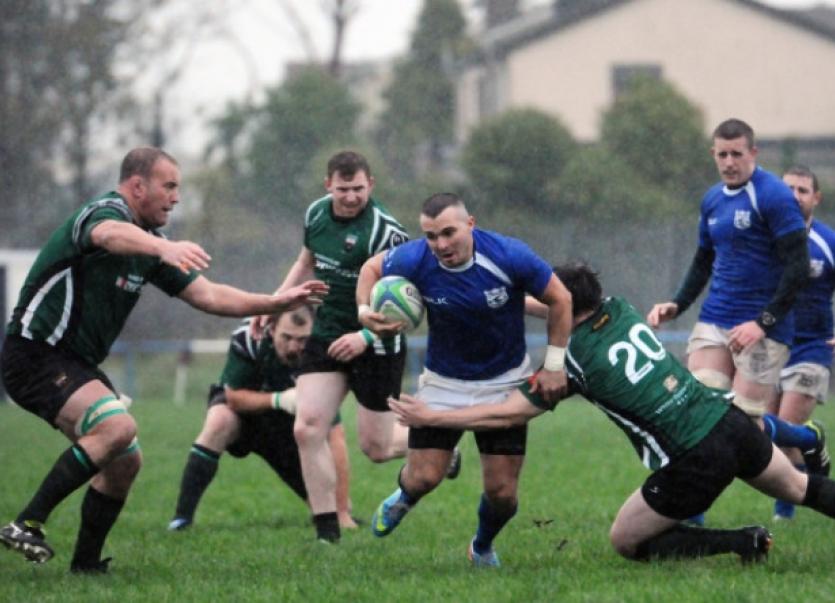 While there was success for Young Munster in 1A, Thomond in 2A and Bruff in 2B, there was disappointment for the five remaining local sides.

Munsters’ moved up to sixth place in the top flight thanks to a plucky 9-6 away win over Cork Con at Temple Hill.

A penalty by Ben Martin and a drop goal from Willie Staunton inside the opening four minutes helped the visitors build a useful early lead. Gerry Hurley kicked two penalties for Con’ to leave the sides level at half time. However, a penalty by Ben Martin twelve minutes from time decided the issue in favour of Munsters.

John Staunton’s side host Ballynahinch in Division 1A at Tom Clifford Park on Saturday next, 2.30pm.

Garryowen and Shannon had to be satisfied with taking losing bonus points from their home fixtures. Garryowen suffered a frustrating 14-8 reverse at the hands of Dublin University at Dooradoyle, while Shannon have dropped to bottom place in the 1B table after succumbing on a 26-21 scoreline to Belfast Harlequins on the back pitch at Thomond Park.

Garryowen lost two players to the sin-bin and even when the visitors had a player yellow-carded near the end the home side were facing into the strong wind and rain and they could not manage to capitalise. Josh Hrstich had Garryowen’s try while Jamie Gavin kicked a penalty for the ‘light blues’..

The home side managed three tries in all through Luke O’Dea, Hugh Kelliher and John Shine, while David O’Donovan kicked two penalties.

Next up for Shannon, who have managed just one win in their five AIL games this season, is a crucial away game against Dublin University on Saturday next.

UL-Bohs had nothing to show for their lengthy trip to Malone after losing out to the Ulster side on a 23-10 scoreline.

UL-Bohs left themselves with a mountain to climb in the second half after trailing 20-0 at half-time at Gibson Park, with Colm Tucker’s side conceded three tries during that opening period.

The Annacotty side stepped up their performance level several notches after the break, scoring 10 points through an Ian Condell try and five points from the boot of Shane Airey.

Next up for UL-Bohs is a crucial derby clash with Garryowen under the Thomond Park floodlights on Friday night, 7.30pm.

UL-Bohs are currently sixth in the 1B table, three places and four points behind the ‘light blues.’

In Division 2A, Thomond moved up to third place in the table with an impressive 33-6 bonus point win over City of Derry at Liam Fitzgerald Park.

The home side led 14-6 at the break, thanks to tries from Kevin O’Mahoney and Dean O’Brien. O’Brien also kicked two conversions.

Meanwhile, in Division 2B, Bruff scored the only Limerick win defeating DLSP 10-3 in Dublin. A late Mike Carroll try proved decisive as Bruff moved up to seventh.

There was disappointment for 13th placed Old Crescent who suffered a 24-0 thumping away to Midleton and bottom side Richmond who were beaten 33-6 at Tullamore. Richmond trailed 13-3 at half-time. Richmond face a trip to Bruff this Friday, 7.30pm.