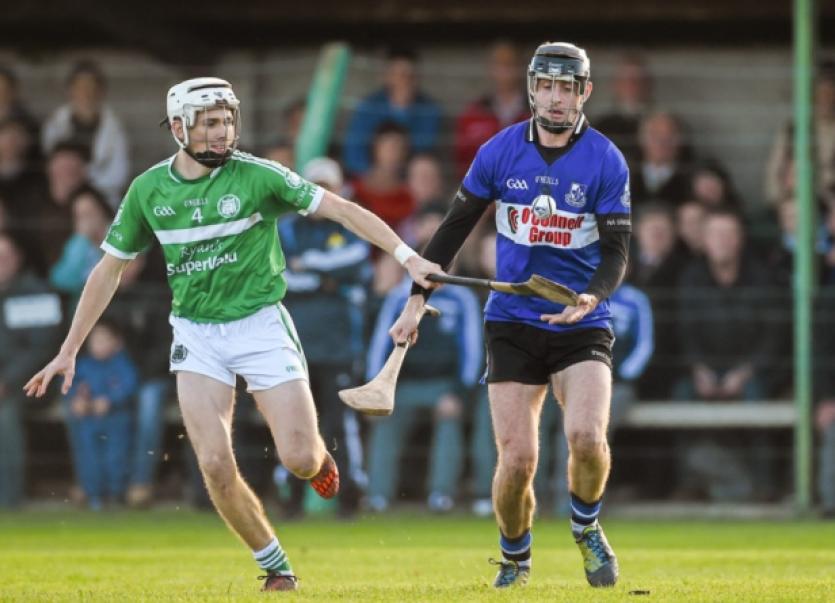 KILMALLOCK produced a stunning performance this Sunday to book their place in the Munster club SHC final.

KILMALLOCK produced a stunning performance this Sunday to book their place in the Munster club SHC final.

The Limerick senior hurling champions produced a performance full of power and passion to defeat favourites Sarsfields of Cork after extra time, 3-22 to 3-20.

The thrilling victory books a November 23 final against Clare’s Cratloe.

It is understood the club’s have an option to toss for the Gaelic Grounds or Ennis and barring this agreement it would appear Thurles will be the final venue.

Managed by former Clare senior hurling manager Ger ‘Sparrow’ O’Loughlin Kilmallock needed two points in the dying seconds to finally see off the Sarsfields challenge after a contest that produced 48 scores over the course of 80-odd minutes.

The two sides defied the November conditions to produce a heart-warming contest for an official attendance of 2,876 in Fitzgerald Park in Kilmallock and the watching thousands on television.

Kilmallock played with the wind in the opening 30-minutes and didn’t appear in an ideal situation when trailing 1-6 to 2-4 at the break. And, that was despite getting off to an ideal start when Man of the Match Kieran Kennelly bundled to the net in a crowded goalmouth in the third minute.

But the home side were knocked back on their heels midway though the half when Sars struck for two goals inside 90-seconds. The first came from Eoin Quigley and the second from the towering Michael Cussen. That had the Cork champions 2-2 to 1-2 clear.

Indeed the lead could have been greater but Cian McCarthy crashed a shot just wide in the 20th minute and two minutes later Barry Hennessy advanced to deny Kieran Murphy.

All indications were that Kilmallock faced an uphill battle in the second half.

But they were a transformed outfit with Gavin O’Mahony now in midfield to curb the influence of Daniel Kearney.

To a man, Kilmallock raised their game, helped by a fifth minute goal when Bryan O’Sullivan’s long delivery went all the way to the net , albeit it Kennelly did challenge under the dropping ball to occupy the defence. That put Kilmallock 2-8 to 2-6 in front.

There was a Sarsfields response but Kimallock continued to boss proceedings and Robbie Egan, Kennelly and Graeme Mulcahy all hit points for a 2-14 to 2-11 lead.

Then sub Paddy O’Loughlin, with his first ever touch of a ball in senior championship hurling, goaled to increase the gap to six points with eight minutes to play.

Alas, the fightback was well underway when Kieran Murphy goaled in the 55th minute and then two late Cian McCarthy frees ensured extra-time.

Kilmallock won the toss and opted to leave the wind until the second extra 10-minute period. They entered that level 3-18 lead with sub Conor Barry announcing his arrival with one of the points.

But a replay looked likely as the game entering the dying seconds. Then Limerick minor full back Paddy O’Loughlin sent the home fans wild before captain Mulcahy sealed the famous win.