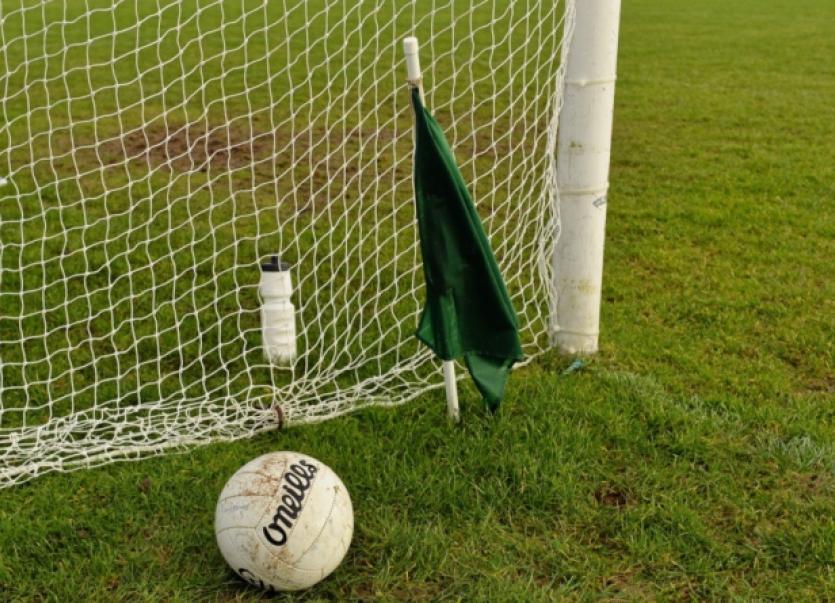 THERE are four teams into the knockout stages of the Limerick SFC following the fourth round of games played over the weekend.

THERE are four teams into the knockout stages of the Limerick SFC following the fourth round of games played over the weekend.

Fr Casey’s, Ballylanders, Dromcollogher-Broadford and St Patrick’s are definitely through but 2011 champions Monaleen are out.

Monaleen lost to an Eoin Hanrahan-inspired St Patrick’s side in Claughaun on Saturday evening meaning they have just two points after three games and now can’t catch any of the sides ahead of them in Group 2.

Hanrahan hit 2-5 (2-4 from play) in Saturday’s game as the Rhebogue club came out on top in the city derby on a scoreline of 3-8 to 0-12. They play Ballylanders in their final group game to decide the final placings while Drom-Broadford play Pallasgreen and Monaleen play St Mary’s-Sean Finns in a game that should be of little consequence. Pallasgreen and Ballylanders still have to play their Round 4 game as it was postponed over the weekend but Drom-Broadford made light work of beating St Mary’s on a scoreline of 2-15 to 1-6 in Feenagh.

That win secured Fr Casey’s a place in the knockout stages but they must beat St Kieran’s in their final game to claim top spot and direct entry into the quarter-final.

A win for St Kieran’s would see them through as group winners but a loss could put them out if Ballysteen beat Newcastle West to leave three teams on six points. In that instance scoring difference would come into play.

At the bottom of that group, Adare and Galbally meet in the final round, where the losers will go on to the relegation play off against the bottom side in the other group, most likely to be Pallasgreen.

Where three or more teams finish level, scoring difference is used to decide the placings. When two teams finish on the same points, then the result between those teams will determine who advances.

The next round of games is fixed for Saturday, September 6.

Castlemahon and Mountcollins have still to meet in the final game in Group 1 where the winner will play Na Piarsaigh in the quarter-final and the loser taking on Oola.

For more on these games, see the weekend edition of the Limerick Leader