The good times continue to roll for Limerick camogie 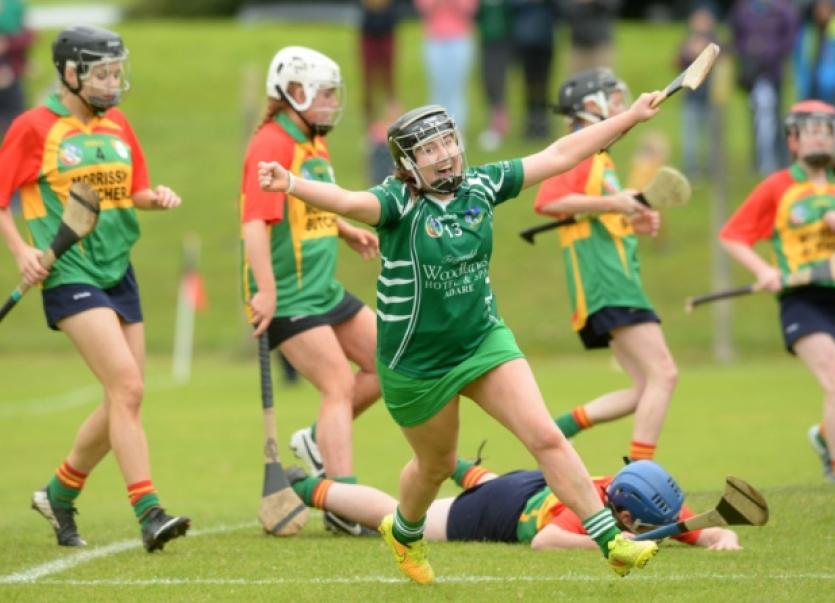 Limerick’s Junior team won what they hope to be the second of three All-Ireland Camogie titles in 2014 with a 2-8 to 1-6 victory over Carlow in Moneygall on Sunday.

They added the Junior A title to the Minor title won in May and now look forward to the Intermediate Final in Croke Park on September 14. Captain Noreen Barry lifted the Nancy Murray Cup to the cheers of the sizeable Limerick support completing a League and Championship double for the Junior team.

The game was played in wet and blustery conditions and Carlow played with the benefit of the breeze and a slight slope on the pitch in first half and opened the scoring with a point from an Eleanor Treacy free. Caitrín De Bhál replied with a free for Limerick to level the score.

Marian Doyle then scored the half’s only point from play to give Carlow the lead. Limerick’s prolific goal scorer Sarah Collins had a shot saved by Mary Coady in the Carlow goal and Lisa Scanlon converted the resultant 45 to level the score again on the quarter hour mark.

The remainder of the half looked like remaining scoreless as Limerick goalie Laura O’Neill denied Ciara Quirke three times as Carlow looked to capitalize on the wind advantage. Instead it was Limerick who went in at half time ahead after Lisa Scanlon converted a free just before the break.

Limerick had looked more settled as the half progressed as the introduction of Rosemarie Rea on 20 minutes was having an impact.

Kristy Carroll came in at the break to add more physicality to the Limerick attack and added to their momentum as Limerick blitzed Carlow in the first 10 minutes of the second half. Lisa Scanlon converted a free and a 45 to open a three point lead inside 5 minutes.

Sarah Collins was also having an impact with her trade mark strong runs on goal. Having been denied again by the Carlow keeper she got off the mark with Limerick’s first point from play on five minutes then in the next minute after breaking through from the right played the ball across to the waiting Bríd Hannon who put the ball in the net to open a seven-point gap.

Carlow though are a quality side and with Ciara Mullins and Tara Wilson impressive in midfield were not going to go out without a fight. Tara Wilson converted a free and Ciara Mullins scored a super point from play to close the gap to five.

Lisa Scanlon and Ciara Quirke exchanged frees until on 25 minutes Sarah Collins finally got her reward and her 14th goal of the season to leave the score Limerick 2-7 Carlow 0-5 with five minutes to go. Donna Mulcahy added a point from play as the game reached its conclusion.

However at the end of normal time Marguerite McCarthy was sent off for a second yellow card and from the resulting free Ciara Quirke squeezed the ball into the corner of the net. Ciara also added a point from a free with the last action of the game but it was too late and Limerick were crowned All-Ireland Junior A champions to the jubilation of players, management and supporters.

Lisa Scanlon was deservedly awarded player of the match however it must have been a close call as a case could be made for any number of Limerick players notably goalkeeper Laura O’Neill.

Noreen Barry accepted the Nancy Murray Cup on behalf of the Treaty girls and along with Donna Mulcahy and Sarah Collins led the crowd in a rousing rendition of “Limerick You’re A Lady”.

The celebrations continued into the evening with a meal for players and management at sponsors the Woodland House Hotel and then on for a homecoming in captain Noreen Barry’s home parish of Killeedy.

This team will re-assemble and continue to train with their Intermediate colleagues over the next three weeks as they prepare for another All-Ireland final this time in Croke Park and look to complete the job and bring home a third All-Ireland Camogie title to Limerick in 2014.

Well done also to the U-10 teams from Ballybrown and Treaty Gaels who took part in the mini-games at half-time.