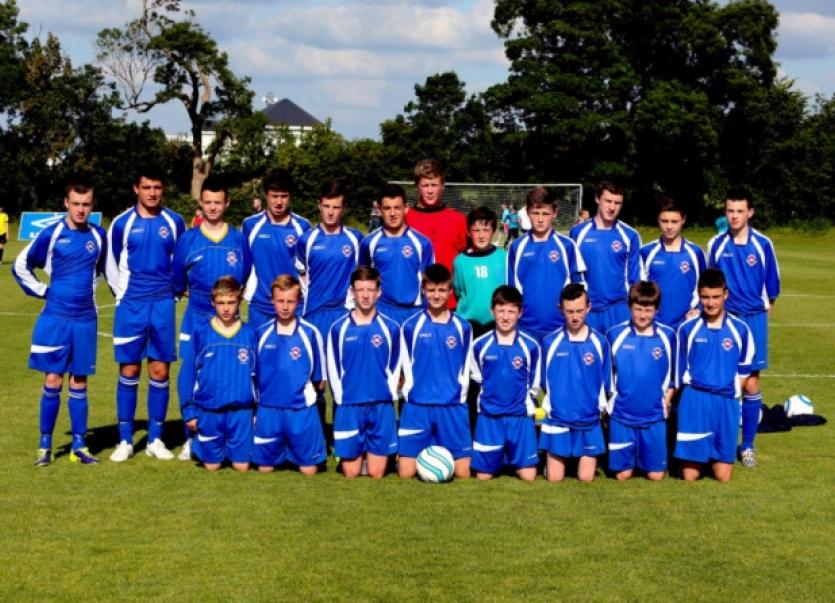 THE Limerick District Schoolboy League (LDSL) advanced to this Thursday’s semi-final of the prestigious Kennedy Cup U-14 inter-league soccer competition following a thrilling 4-3 quarter-final win over the Wexford league at a sun-kissed UL.

THE Limerick District Schoolboy League (LDSL) advanced to this Thursday’s semi-final of the prestigious Kennedy Cup U-14 inter-league soccer competition following a thrilling 4-3 quarter-final win over the Wexford league at a sun-kissed UL.

The LDSL, who also reached the last four in 2013, will take on Waterford at UL today, Thursday at 3pm, with holders the Dublin and District Schoolboy League facing Kildare in the opening semi-final at 1pm.

The Desmond League reached the shield semi-final with a 2-0 win over the NDSL, while Limerick County lost their bowl quarter-final 3-2 on penalties to North Tipperary.

The LDSL’s Kennedy Cup quarter-final with Wicklow produced a terrific tie, lit up by some fantastic goals.

Limerick jumped into a commanding 2-0 lead mid-way through the opening half, thanks to a headed goal from Joshua O’Reilly, of Mungret Regional, on 14 minutes and a second from Lee Davitt Molloy from the tightest of angles three minutes later.

However, a resilient Wexford side was level by half-time, thanks to a stunning free-kick from Kyle Kennedy and a composed finish from Sean Delaney on 28 minutes.

Limerick District - semi-finalists 12 months ago - had built another two-goal advantage by the 53rd minute when Pike Rovers’ Cian Power headed home in the 37th minute following a fine run down the left from clubmate Dylan Kelly-Higgins, before the impressive John Hurley, of Mungret Regional, curled in a terrific fourth goal in the 55th minute. The drama wasn’t over yet and a second Delaney goal for Wexford made for a nervy finish for home supporters.