Laulala an injury doubt for Munster’s clash with Toulon 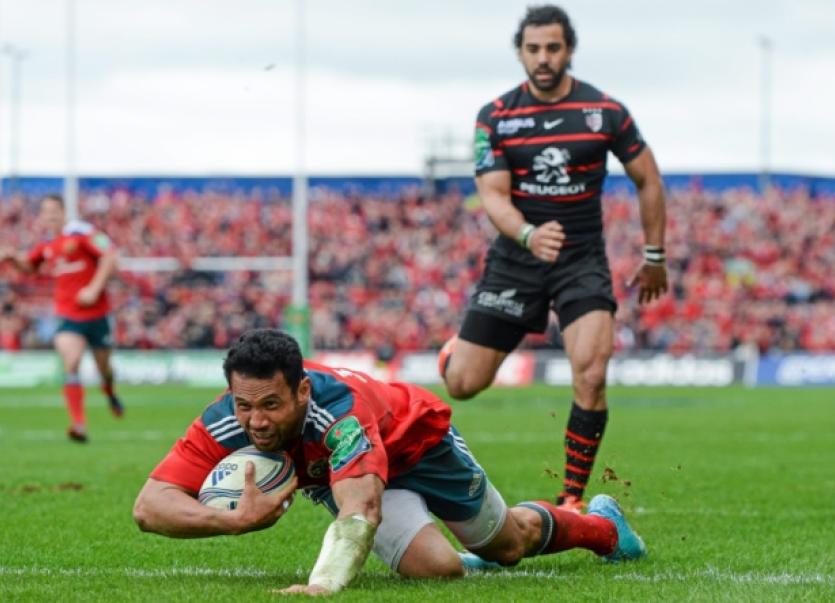 MUNSTER centre Casey Laulala is a major doubt for the province’s glamour Heineken Cup semi-final clash with Toulon after breaking a bone in his right hand in the weekend win over Toulouse.

MUNSTER centre Casey Laulala is a major doubt for the province’s glamour Heineken Cup semi-final clash with Toulon after breaking a bone in his right hand in the weekend win over Toulouse.

Laulala is due to meet with a specialist later today, Tuesday, to get a clearer indication of how long he will be sidelined for. However, the centre’s participation in the Heineken Cup semi-final in Marseille on April 27 must now be in some doubt.

Laulala, who scored a try in the second half of the 47-23 drubbing of Toulouse, is leaving Munster at the end of the season.

Captain Peter O’Mahony underwent a scan yesterday on the left shoulder injury sustained during the course of Saturday’s quarter-final win at Thomond Park. The injury will be reviewed further today when O’Mahony meets with a specialist.

Munster have taken up an initial allocation of 12,000 tickets for the Heineken Cup semi-final showdown with Toulon at the Stade Velodrome later this month.

Tickets for the game are set to be sold firstly through the clubs and schools in the province, the Munster Rugby Supporters Club and 10-year ticket holders. If the demand from Munster supporters exceeds the initial allocation, then the province will be entitled to an increase. A public sale of tickets is also likely. The Stade Velodrome has a capacity of 41,000. The two competing clubs get an equal allocation of tickets for semi-finals.

Munster Academy prop Rory Burke, who sustained a neck injury in the British and Irish Cup defeat to Leinster, has received the all-clear following an x-ray and scan post-match.

A Munster Development XV squad will play Russian club side Enisey-STM this Wednesday at Musgrave Park, Cork at 7pm. Admission is free.

Enisey-STM have played Munster on three previous occasions, against an A side in Nenagh, 2009 and against Development sides in Dooradoyle and Bruff in 2012 and 2013 respectively.

The Munster side is set to include Academy players and club players.