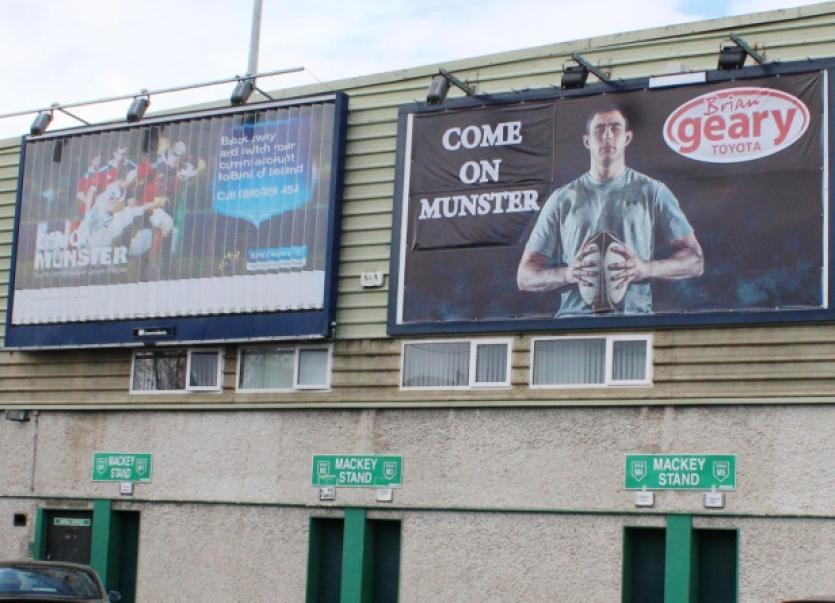 LIMERICK GAA officials have dismissed calls to remove two giant rugby based advertising billboards from the back of the Mackey Stand in the Gaelic Grounds.

LIMERICK GAA officials have dismissed calls to remove two giant rugby based advertising billboards from the back of the Mackey Stand in the Gaelic Grounds.

Last week the Limerick Leader revealed that Limerick GAA officials had requested that changes be made to the wording of one billboard.

But delegates at this Tuesday’s April County Board meeting wanted both billboards completely removed.

“I don’t think you would see that in Cusack Park in Ennis or Pairc Ui Chaoimh, Pairc Ui Rinn or Semple Stadium - we are holding the semi-finals of the hurling league next Sunday week and we will be a most talked about county the following morning. I don’t think they should be up there,” said Riordan.

He was supported by Michael Weekes of Bruff.

“We are advertising another spot - it’s a disgrace,” said the Bruff delegate.

South Board secretary Hugh Murphy questioned if the presence of the signage was breaking GAA rules.

But the County Board officials confirmed that removing the signs was not possible due to legal contracts.

“There is no going back and taking down the signs,” stressed Limerick GAA treasurer Donal Morrissey.

“The signs are sold on a commercial basis so long as what they put up there is not publicly offensive,” outlined Morrissey.

“I wouldn’t be happy with the two signs and I have spoken to one of them and they are coming back to me and the other one was seen as offensive and it was changed,” he explained.

However it was the wording ‘This is our Town’ that caused unrest and within 48 hours the hoarding had been altered to ‘Come on Munster’.

The secretary outlined the financial benefits.

“Before a ball is kicked or sliothar pucked it costs €250,000 to maintain the Gaelic Grounds,” he said.

Eoin O’Sullivan of Cappagh-Kilcornan asked for changes to be made when the contracts are renewed.

“This is an embarrassing situation for the GAA in Limerick,” said O’Sullivan.

“There are no business deals that don’t contain conditions and it’s quite possible to sign an agreement with specific conditions to stop promotion of games other than our own,” he said.

“When we did these deals no one contemplated that alternate sports would be on the advertising signage - one is a garage and the other is a bank,” said Morrissey.

He added: “clearly when the signage is renewed we will have such conditions and we have no difficulty with that. I fully accept that when we renew that they will have to be on different terms,” said the treasurer.