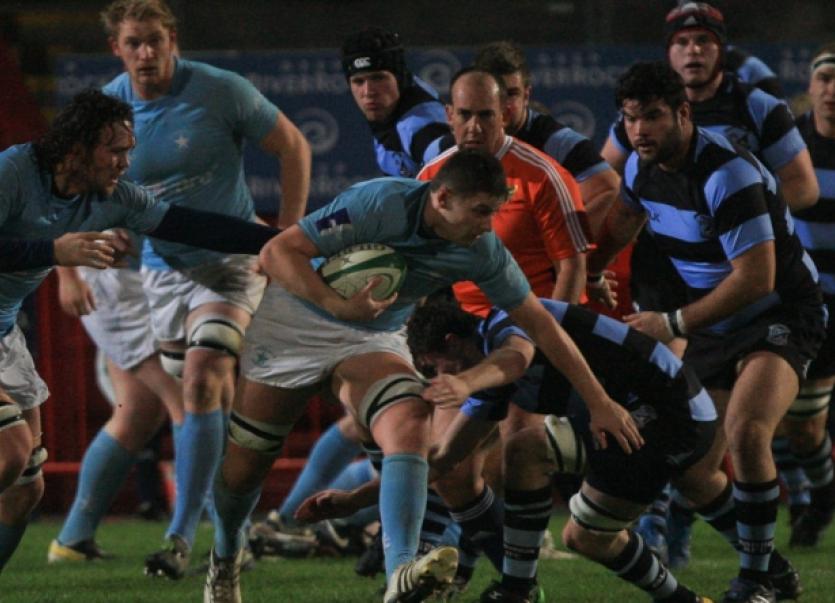 MUNSTER Cup specialists Garryowen are on the scent of a 39th title after beating local rivals Shannon 20-17 in a pulsating semi-final in Thomond Park on Friday night.

MUNSTER Cup specialists Garryowen are on the scent of a 39th title after beating local rivals Shannon 20-17 in a pulsating semi-final in Thomond Park on Friday night.

Garryowen will face Cork Constitution in the decider at a Limerick venue next month after Con overcame UCC in the second semi-final on Saturday.

Garryowen and Shannon produced a typical Munster Senior Cup tie, full commitment from both sides, a blistering start and nail-biting drama in the final minutes.

Garryowen got the perfect start and led 7-0 after just two minutes, centre Alan Gaughan intercepting in midfield and scampering the 35 metres to the posts with some ease.

Jamie Gavin landed the conversion, one of four out of four attempts at the posts.

The out-half showed great composure throughout, making up for his below par showing the previous Friday night, and one touch-finding kick from play with the outside of the right boot was sublime.

After Gavin had kicked a 35 metre penalty for Garryowen that put them 10-0 in front, Shannon at last got into attacking mode.

Tadhg Bennett made it 10-3 with a penalty and after some splendid running rugby, Bennett cleverly disguised his short pass to send David O’Donovan over.

The early stages of the second half saw Garryowen enjoy the bulk of the possession but they were rocked on 57 minutes when a Shannon training ground move saw Tadhg Bennett slip through the cover for a well-worked try that he also converted.

Not for the first time this season Garryowen’s heart for battle was tested but this time they responded in style.

Gavin fancied himself from distance and confidently dispatched a penalty kick between the posts to reduce the lead to 17-13 and with ten minutes left, the light blue pack disrupted a five metre put-in for Mark Hanrahan to rip the ball from Shannon hands and dive over.

Gavin found the target with the conversion but from there to the finish the outcome of this local derby could have gone either way.

Shannon ran the ball from deep in the dying minutes with Richie Mullane causing problems for the Garryowen defence almost every time he got possession and David O’Donovan always threatening, but the brilliantly worked score that was whistled back and the missed penalty chance were the closest they could get to their ticket for the final.

“We got the rub of the green but we are now in a final and after a difficult start to our season, that is to be welcomed. We have a good record in this competition and hopefully we can bring some silverware to Limerick this season. This win will boost the players’ confidence for our difficult AIL visit to Ballynahinch. Hopefully it will put a small bit more pep in our step.”