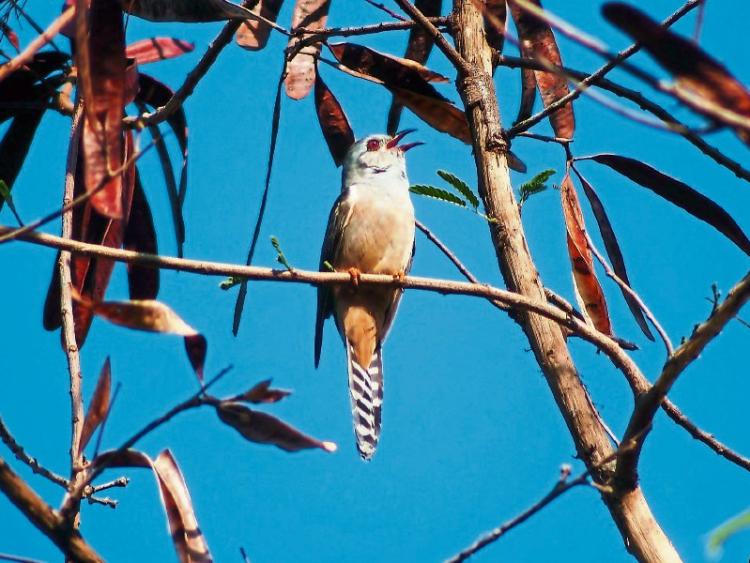 THE FIRST of May is the beginning of summer. We move into the light half of the year when the sun grows to its height at midsummer and then begins to wane until at Samhain (November 1) the dark half of the year begins again. Flowers and foliage are in full bloom, and the rural landscape is getting brighter by the day though later than usual this year.

By now, the heralds -of summer the cuckoo, corncrake, swallow and the martins, should have returned from their winter sojourn in Africa. The cuckoo arrived in my locality on Friday, April 17 which was a lovely sunny day. The poet William Wordsworth welcomes the arrival of the cuckoo in his poem 'To the Cuckoo':

Oh, blithe newcomer I have heard

I hear thee and rejoice

Or but a wandering voice?

The cuckoo is a newcomer returning each year to its old haunts to be heard. It is only seldom seen. For Wordsworth it is a wandering voice, a bundle of associations, folklore and superstitions. Sadly, the number of cuckoos has greatly reduced like so many other birds. The corncrake has disappeared for many a day from our locality and the swallows are not as plentiful as in the olden days. We are lucky that a few cuckoos still visit us from southern Africa from April to August each year.

Cuckoos are just as well known for their unique ‘cuck-oo' call as they are for their habit of laying eggs in other bird's nests-though it is the males who do the cuckooing and the females who lay the eggs. Males 'cuck-oo' at the beginning of the season to attract a mate, their whole bodies expanding and contracting with the effort. Once this has been achieved, they become much quieter for the rest of the season.

A hen cuckoo may lay several eggs in different nests. She may even discard an existing egg to make room for her egg, so it is no wonder she is not liked by other birds. If the nest is situated so that she cannot position herself to lay directly in it, she will lay the egg nearby on the ground and carry it to the nest in her bill. A young hatched cuckoo systematically removes any remaining eggs, from the nest to gain the complete attention of its surrogate parents. For this reason -and perhaps because they look like hawks- they are frequently attacked or mobbed and harassed by smaller birds.

Cuckoos lay in several birds’ nests including dunnocks, meadow pipits, reed warblers, robins, pied wagtails and blackcaps. It is part of the cuckoo’s mystery that young cuckoos migrate alone and know where to go without any teaching and can also recognise their own species to mate, despite never having seen another cuckoo.

There are several old beliefs regarding the cuckoo and its call. If you heard the cuckoo first with your right ear, you would have good luck all summer long, but if you heard it with your left ear, the summer would not be much fun for you. It was considered lucky to hear the cuckoo on the morning of your wedding. It was thought very bad luck to kill a cuckoo or destroy its eggs.

In west Cork the last three days of April and the first three days of May were called the 'Cuckoo Days', and a storm at that time was called a 'Cuckoo Storm'. Bad weather was expected in early May and was known as the 'Scaraveen', more correctly Garbhshíon na gcuach (rough weather of the cuckoo).

Cuckoo oats were oats that weren't sown on account of bad weather or laziness, until the time the first cuckoo arrived. The cuckoo appears as a symbol of female beauty in some Irish legends, probably from a play on words due to the Irish word cuach which means both cuckoo and curl or ringlet. In one story a very beautiful princess called Crédhe, daughter of King Cairbre, was described as Crédhe, for whom the cuckoo calls. An only child used to be called Éan na cuaiche (cuckoo’s chick-an only child).

The cuckoo also appears in some traditional sayings. In Donegal anything strange, rare or unexpected was called a 'winter cuckoo'.

MAY DAY or Bealtaine was the greatest of the old Celtic festivals. It marked the beginning of the summer and was the time of the year when magic was at its most potent. The people of the Sídhe the good people or fairy folk, were said to change their residence on this night, May Eve, and woe betide the unwary traveller or young bride who might be swept away in the sí gaoithe ( fairy wind). Spells were cast, witches assumed the shape of hares, and milk and butter were vulnerable.

Long ago some people remained up all night on May Eve to protect their cows from evil and it was the custom to drive the beasts between two fires to safeguard them against being affected by fairy curses ( idir dha thine Bealtine). Holy water or blessed ash was sprinkled on cows and on boundary fences and tillage fields as a safeguard.

The good harvest, which the hardworking farmer might expect from his crops, could be stolen away by some covetous neighbour who had previously taken, by stealth, bread meat or an egg, from his neighbour’s house and buried them in a field. By this deed the evildoer hoped that the farmer's crops would fail and that he or she would reap the rewards. To counteract this spell, it was necessary first to discover the buried food, which should then be burned. In its place a blessed candle, a rosary beads or some other religious object should be buried, holy water sprinkled, and prayers recited.

Mary Carbery in her book The Farm by Lough Gur (1938) gives a colourful description of how the maids counteracted spells: They strewed primroses on the threshold of the front and back doors-no fairy can get over this defence-and in cow byres they hung branches of rowan while the head dairy woman sprinkled holy water in mangers and stalls. The milkmaids at the end of the evening's milking stood to make the sign of the cross with froth from the pails, signing themselves and making a cross in the air toward the cows.

Bringing in the summer was done in every house. A sprig of a tree or a bush was brought in early in the morning and placed on the windowsill, and inside placed on the mantel place. May bring with her the beauty and fragrance of hawthorn blossoms and the song of the blackbird. Old poets described her as a beautiful maiden, clothed in sunshine, and scattering flowers on the earth, while she danced to the music of birds and brooks. It is nice to know that some of the old May traditions are still remembered and observed in parts of the county.