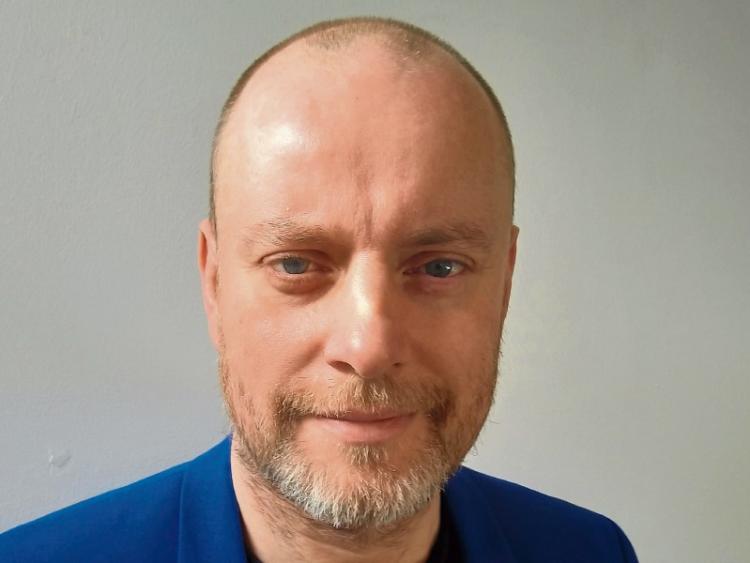 WRITING a first novel was, Keith McCoy acknowledges, “a pure test, a test of the mind and a test of creativity”.

The 40-something year old from Newcastle West, will return to launch his first book Hello Larry Barry in his hometown next week. “I didn't know if I could do it, but wanted to at least see if I could, so I gave it a right go,” admitted Keith, who  works as a mental health professional in Manchester ”

“ I sketched out the story, and then sat down and wrote it mid June to mid September last year,” he said.

The main characters, Lawrence, Big Mac, Boss and Mooney had taken root in his head many years before that, however, and also had the title in mind.

But in 2018, reading an article about the lengthy journey taken by  Kevin Costner and Michael Blake to make the film, Dancing with Wolves, something snapped into place for Keith. It was crunch time, an end to talking and time to get writing, he decided.

But he was doing an MBA at the time as well as working and rearing his family and very quickly realised he couldn’t write a novel at the same time. “So I made the promise to myself, that once the MBA was done, I would write the novel.” The desire to give a good example to his young son, by turning intention  into action,  also spurred him on.

“I didn't always know the direction it was going in,” he explained about writing the book. “It must have been kind of like knitting a jumper without ever being taught to knit, without ever seeing someone knit,  just trusting that you have seen lots of jumpers and that this is enough to figure out what to do.”

The novel, set mainly in Limerick and against a background of police, political and business corruption, centres around the main character Lawrence, who has just been discharged, after a long period, from a mental health unit.  But finds himself demoted from his senior role in the Special Branch in Dublin and transferred to a new unit in Limerick with a bunch of failed and odd detectives. Determined to get back to his old life, he takes on the challenge of making a success of his new team.  What follows is a funny but serious story that explores mental health stigma, hope and the drive needed to overcome obstacles.

“If you enjoyed TV shows such as The Office, the Young Ones and Father Ted, or any films by the Coen brothers, you will love this,” the back-cover resume states.

“It  is a dark comedy,” Keith says. But there is a good reason why he put mental health as a theme in the book. “I've worked in mental health since finishing school aged 18, and have seen how badly it is depicted in drama and literature,” he explains. “All too frequently mental health is misrepresented by a caricature of a psycho killer when actually mental health is very broad, from depression to bi-polar, to neuro development disorders, to anxiety, to personality disorders and more.

“99.99% of mental health gets no attention, no positive or meaningful attention, and therefore I wanted to do something different, with humour, that was fun, but that also showed another side to mental health, that gave the reader an insight into the world of someone with a severe form of mental illness,” he says.

“In addition , you can't work in mental health and not encounter suicide, it leaves an impact on you as a person and a clinician,” he continues. “Then there's the people you personally knew, or families you know, and they lost a son, or brother or father in this way, all that pain and despair, the loss, the tragedy. I think this in some way also played a part in driving me to complete Hello Larry Barry.”

Keith is the son of Matt and Denise McCoy, Newcastle West. Hello Larry Barry will be launched in the Ballintemple Inn at 7.30pm on Saturday, March 21, pending further notice due to Covid-19 situation.