Love Island: A recoupling is on the way... 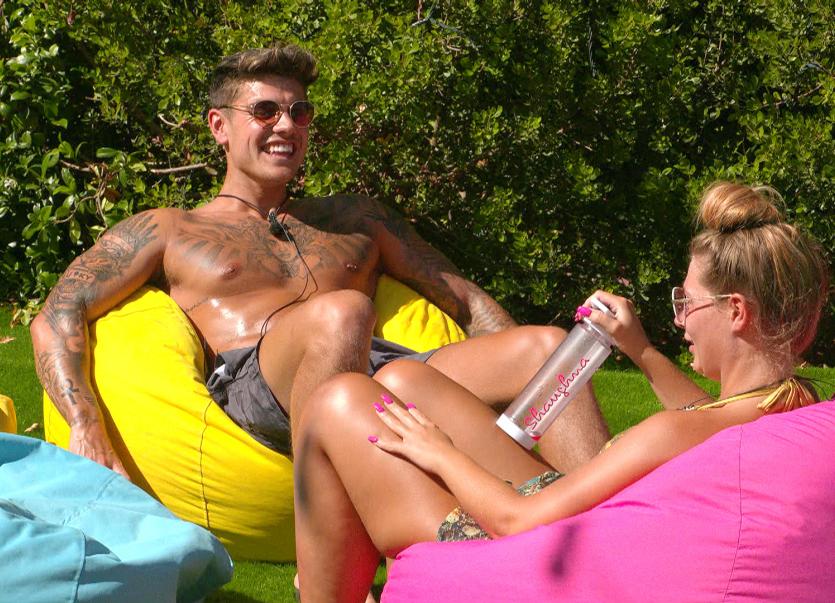 ON TONIGHT's Love Island the couples discuss the results of the headline challenge.

Siânnise tells Luke T she feels confused as to why he would reveal details of their intimate time in the Hideaway.

Luke T says: “I just said we were both naked… I think I just talk too much.

Siânnise replies: “The girls asked me what happened and I didn’t say anything because that’s between me and you… I know that you wouldn’t have done that in a malicious way…  you probably were excited, the boys were probably egging you on, but that’s a personal thing to me and that’s something I would have rather had stayed between us.”

Luke T says: “Do you not think it was sort of obvious?”

Siânnise replies: “Not really no…”

In the Beach Hut Luke T says: “I just overshared. But whenever she’s sassy I just find it really attractive. She put her foot down and told me off a bit, which I weirdly like a lot… She definitely laid down the law a bit.”

Meanwhile, Priscilla tells Mike of being his ‘fourth choice’, she says: “ I’ve been sold a dream before, I just don’t want this to be another dream.

And Paige and Finn discuss whether his head might have been turned in Casa Amor.

Finn says: “I have not done one thing in Casa Amor that I regret. Whatever I did, was respectful to you the whole time. I feel like I’ve come back here with my head held high knowing I’ve respected you and I’ve gone about things in a way that I’m proud of. My head wasn’t turned.”

Finn adds: “All I care about is how you feel and how I feel.”

Paige replies: “I’ve told you how I feel… The headline, in black and white… what do you want me to take from that?”

Finn says: “I understand why you feel like that, but all Casa Amor did is make me realise how much I was into you.”

And elsewhere, Molly discusses the headline that suggested Callum is ‘set to cheat’.

Callum insists: “I’m telling you, we’re not all d***heads. I am reassuring you now.”

SHAUGHNA PULLS DEMI FOR A CHAT

Shaughna decides she’s going to speak to Demi tonight about her feelings for Luke M, admitting first in the Beach Hut: “It’s kind of been under my nose for weeks. I’ve definitely gone for the guy my mum would want me to go for, finally. Luke is an angel and any girl that ever ends up with him is a very lucky girl.”

Grabbing Demi for a chat at the look out, Shaughna admits: “This is a very uncomfortable conversation for me – which is why I’m smiling because I feel uncomfortable right now – I feel like I want to have a chat with Luke M.”

Demi replies: “Right OK. Oh God… what’s made you feel like this?”

Shaughna admits: “I think Jamie’s solidified this a bit for me. I’m just like absolutely, I don’t have feelings for you at all. I don’t feel like that for Luke, I feel like we’ve always had flirty banter back and forth. [In the Snog, Marry, Pie challenge] when he didn’t marry me, I was a bit like, ‘Oh OK… I thought that was going to happen’. Then when it didn’t go well with Natatalia I was thinking ‘I’m happy about that, why am I happy about that?’”

Demi says: “I always thought you and him were more like brother and sister.”

Shaughna replies: “A bit like you and him, you never explored it, I never did.”

Demi says: “I feel the same with Jamie. He’s a really nice guy. I keep thinking I need to be open to Jamie, I can’t make the same mistake I did with Nas. But at the same time I can’t help but gravitate towards Luke. You do what you’ve got to do but obviously at the same time I’m still going to get to know Luke.”

In the Beach Hut, Demi admits: “I just feel like I don’t have much luck in here. I’ve just got to hope Luke does like me. If Shaughna tells him this information then he might shut it down and come closer to me and it will solidify our connection. At the same time, if Shaughna tells him that and he starts acting different about me and starts being like that to her, then again at least I know it wasn’t meant to be.”

Paige and Finn encourage Shaughna to chat to Luke M straightaway, with Paige admitting: “You’re going to regret it if you don’t do it, you’ll never know.”

Shaughna pulls Luke M and laughing says: “Let me just get it out… When things didn’t work out too well with Natalia and I was like, ‘Yay, why am I yay-ing..?’ It was a weird time for me. So then Jess said, ‘Demi is going to have a chat with Luke’ and I was like, ‘Oh… OK’. And then I was like, why am I feeling like that, weird. I love Demi so it was very awkward for me. Watching you two sit on the daybed, I was just like, ‘Oh…’.”

She adds: “I could be completely barking up the wrong tree. Do I need to say it?”

Luke M admits: “I didn’t expect it. Have you caught feelings?”

Luke M admits: “You’re dropping a bomb… have you thought this over the past few days?”

Shaughna says: “Weeks… Where is your head at?”

Luke M admits: “Scrambled now. Me and Demi got to know each other and got close, she’s getting to know Jamie as well which put me off a bit. I didn’t want to be in that position again to feel second best, I don’t want to be in a triangle…”

After speaking to Shaughna, Demi asks Luke how he’s feeling.

Luke M admits: “I didn’t expect it. It’s hard because you’re getting to know Jamie… she said I just thought I’d tell you before anything happens.”

Demi says: “Me and Shaughna are really close in here. You’ve been in this villa for a really long time, why has it not been explored before? I feel like the way you will be about the situation will say a lot for me.”

At breakfast the next day, Luke M discusses with the boys how he is feeling after Shaughna admitted she has feelings for him. He says: “Demi got to know Jamie so I think it’s only fair.”

Later in the day, Finn gets a text alerting the Islanders that a Recoupling is on the way and that the boys will be choosing who they want to couple up with.