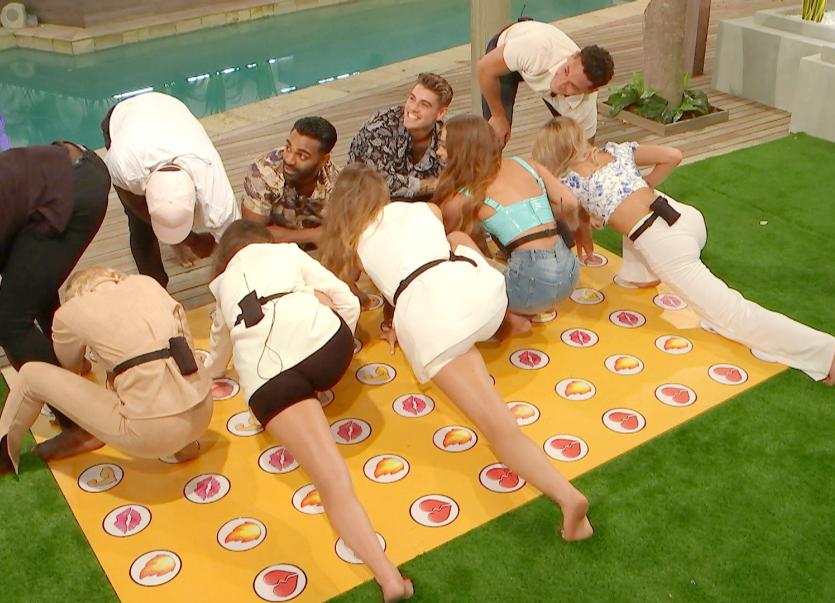 The boys are enjoying getting to know the new bombshells in Casa Amor.

That includes Nas, who is coupled up with Demi and getting to know Eva.

Nas tells Eva: “I feel like you are more my type than Demi. Similar banter as well.”

Speaking in the Beach Hut, Nas later adds: “Eva is a stunning girl. She is more my type…”

Mike replies: “Mine is a pleasantly simple scenario. Me and Priscilla just click and get on.”

Discussing his situation, Callum tells the boys: “With Shaughna, I didn’t feel like if a new boy was coming in, I was just chilled about it. With Molly…”

Mike says: “Molly is waiting for you to do something. Anything. I say you just go for it.”

Luke T adds: “For me, my mind is set on Siânnise. I just want her to be single when I go back.”

Finn replies: “Us being scared is showing that we actually care.”

Callum admits he doesn’t feel the same about Shaughna: “For some reason, it’s not there.”

SHAUGHNA AND PAIGE ON FUTURE PLANS

Meanwhile in the Main Villa, Shaughna tells the girls she’s had a bad dream about Callum.

She says: “I had a nightmare about Casa Amor. Callum was saying to me, ‘It’s between you and another girl, but you’re completely different and the other girl’s really, really shy.’”

Later, she’s discussing the situation with Paige, admitting: “I’m ready to pack my bag and move to Manchester.”

Paige says of the current situation of the boys living in Casa Amor: “I’m telling you, we’re going to be surprised. Whether it’s with our guys or not.”

Elsewhere, Jess updates the girls on her attraction to both Ched and Biggs.

She says: “I feel like I could trust Ched.”

Siânnise replies: “That says a lot.”

Jess adds: “I’m curious. I need to see if I can see Biggs like that, too.”

She later tells Biggs: “You are so different. At the moment I’m spending more time with Ched… I feel like I haven’t got to know you as well as Ched.”

But she seems keen to...

Who will win Jess’s heart?

Tonight, both villas are challenged to play ‘Head Over Heels’.

The game sees the Islanders place their hands and feet on emojis on the mat as directed. They then must perform a task while holding that position, including licking necks, sucking fingers, blowing a raspberry on someone’s belly and kissing.

Earning his first kiss with Natalia as a result, Luke M admits: “Our first kiss, I doubt it will be the last.”

Who else gets up close and personal and which couples come out victorious?

Discussing Priscilla’s new blonde look, Mike admits: “Priscilla’s completely blown me away, 100 million per cent, she’s intrigued me, caught me off guard and I love it.”

Speaking alone at the fire pit, she giggles: “You make me nervous.”

Priscilla replies: “It is good nerves…”

And as Mike tells her “you know I like you”, could there be more than conversation on the cards?

Meanwhile, Callum pulls Molly to one side to tell her how he’s feeling.

Callum says: “I feel like when I came in here I didn’t think my head would turn. I did say it would take someone special for me to turn. And I do think that could potentially be you.”

Molly asks: “Am I making you nervous?”

As the pair share a kiss, is this the start of something new?