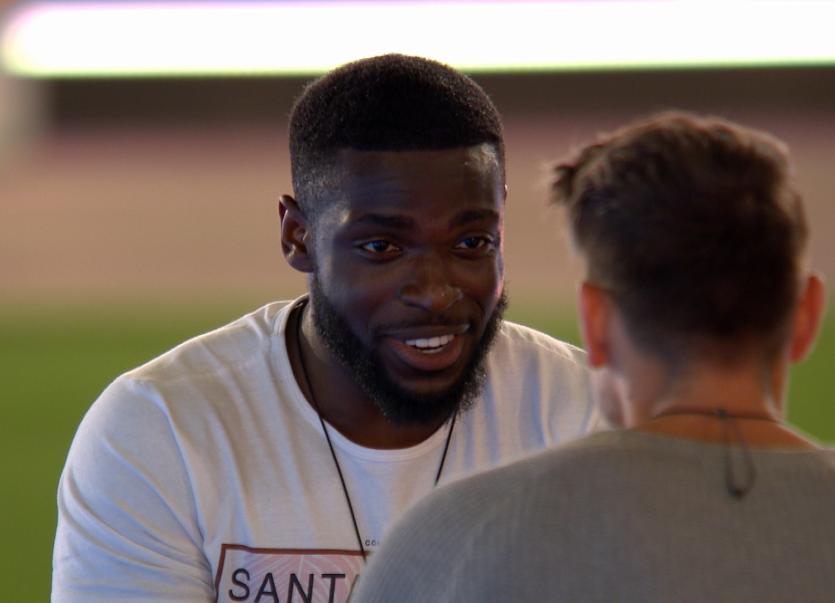 Mike pulls Luke M for a chat on tonight's show

On tonight’s Love Island Mike wants to have a word with Luke M after he interrupted his chat with Jess last night.

Mike says: “That was a bit frosty.”

Luke M says: “There’s only so much you can take. I know you’re going to talk to her, but pulling her so much today…”

Mike replies: “Have I? Or has she just gravitated towards me?

“You came up mid conversation, sat down interrupted and then grabbed her. Fair enough my arm was around her, the girl was cold. You didn’t provide a jacket for her, Mr Gentleman.”

Mike adds: “Naturally she’ll pick me because I’m more of her type.”

And says to Luke M: “To me it seems you’re a bit insecure.”

“I know you’re going to chat to her and stuff. We’ll just have to see how it pans out.”

She adds: “I need to give it more time. Now, my doubts with Luke could potentially push me towards Mike.”

It’s time for the Islanders to don their best lederhosen as Shaughna receives news of today’s challenge.

The text reads: “Islanders it’s time to sort the weiners from the losers in today’s couples challenge OKTOBERSESH! #pitchperfect #sillysausages”

Shaughna jokes: “I think there’s going to be a lot of sausage flying about… I don’t want to say it’s my calling in life!”

And the Islanders have got their work cut out with three different rounds.

First up, the boys must throw beer from their stein into those the girls are holding. The couple with the least liquid at the end is out.

Next up, the girls must toss pretzels, with the hope of hooking them onto poles tied at the boys’ waists. Those with the least hooked on at the end are out.

And finally, for those who’ve made it to the final, they must hold sausages between their mouths and roll on their sides together to the other end of the course. First to complete all of their weiners wins.

REBECCA AND WALLACE DISCUSS THEIR COUPLING

Rebecca and Wallace discuss the lack of spark in their coupling.

Wallace says: “I’ve been trying to get to know you. There’s not a spark there. I don’t want to be fake and force it.”

Rebecca agrees admitting: “I don’t think there’s anything coming from it. We both gave it a chance. There’s no connection there at all.”

But where does this leave them in the Villa?

CALLUM AND SHAUGHNA QUIZZED ON THEIR STATUS

Meanwhile, Shaughna and Callum chat to their fellow Islanders about the status of their relationship.

Sophie teases Shaughna as she jokes: “What’s it like to be in love...?”

Sophie then asks: “Do you see yourself being Callum’s girlfriend?”

Shaughna replies: “Yeah, I suppose.. obviously I came in here to find someone. But I didn’t think I would. I’m not looking for anyone else.”

At the bar, Nas and Luke T are asking Callum his thoughts.

Luke T asks: “Are you exclusive?”

Seeking advice on the stages of a relationships, Callum asks: “Do you have to ask that question, or does it just happen?”

The boys laugh: “You have to say…”

Could Callum be getting ready to ask Shaughna to be official?

The Islanders are faced with a tough decision tonight.

They receive a text explaining that they need to vote for the two couples that they think are the least compatible. They’re warned that those couples who receive the most votes will be at risk of being dumped from the Island.

The couples struggle with the decision, with some debating whether or not to try and vote tactically.

For Wallace and Rebecca it’s about trying to stay in the Villa and meet new people, for Luke M it’s a chance to try and remove Mike from his love triangle, while others worry about sending their friends home. But Jess seems to have the hardest decision when pushed to choose whether to vote for Mike and Sophie or not.

Who will be left at risk?