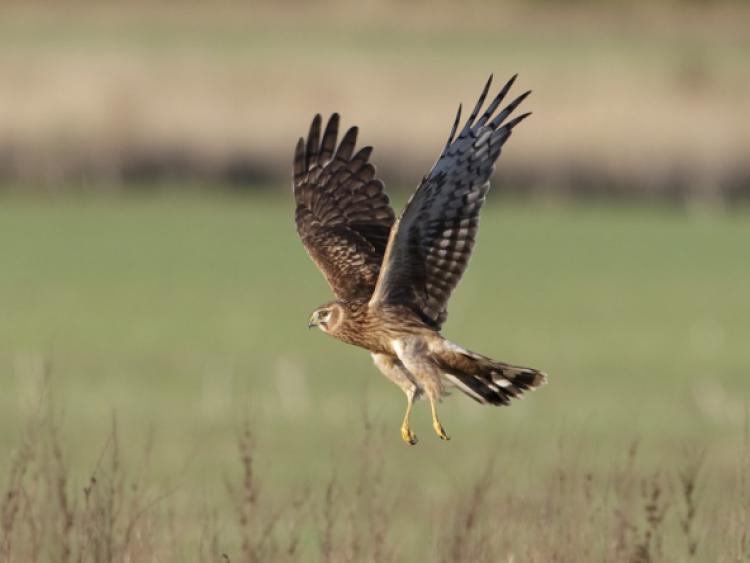 As an organisation whose remit it is to monitor birds of prey in the Republic of Ireland and as coordinators of the 2010 national survey of Hen Harriers in Ireland, we the Irish Raptor Study Group (IRSG) were shocked to read the recent article (July 20) in the Limerick Leader entitled “Open Season on Hen Harrier” by Donal O’Regan.

As an organisation whose remit it is to monitor birds of prey in the Republic of Ireland and as coordinators of the 2010 national survey of Hen Harriers in Ireland, we the Irish Raptor Study Group (IRSG) were shocked to read the recent article (July 20) in the Limerick Leader entitled “Open Season on Hen Harrier” by Donal O’Regan.

We were especially shocked and saddened to read the views expressed by the new Cathaoirleach of Limerick County Council, Cllr John Sheahan. Cllr Sheahan’s call for an “open season” on Hen Harriers is highly irresponsible and can be interpreted as incitement to break both Irish and EU law. Hen Harriers are protected under Irish and EU legislation. The most recent national survey results found the national population to be 128-172 pairs. In recent years fieldwork at some sites in south-west Ireland such as the Mullaghreirks-Stacks-West Limerick Hills SPA suggests that some harrier population are in decline.

Thus, for Cllr Sheahan to single out Hen Harriers as an impediment to development could be seen as an incitement to further decimate the remaining populations of this iconic bird and at best ignores several important realities.

Ireland is obliged under EU legislation to protect harriers by designating the most important breeding sites as Special Protection Areas (SPAs). To qualify as a candidate for SPA designation a site has to regularly hold at least 1% of the national population. In reality many sites which qualify on paper have never been designated, such as the Ballyhoura Hills in South Limerick/North Cork which held 8% of the national population in 2010. Ireland is likely to incur heavy fines from the EU in the future where populations decline because of inappropriate development within a SPA. Many such developments have already occurred (eg. windfarms within several key SPAs) despite claims to the contrary by Cllr Sheahan.

Also Cllr Sheahan seems to suggest that landowners within designated areas are not compensated through environmental schemes. In reality, the National Parks & Wildlife Service has been operating just such a scheme within designated areas since 2007. When the Hen Harrier scheme was first announced, the take-up by landowners within SPAs was high and the funding levels were considered generous.

Cllr Sheahan advocates development such as private forestry on marginal lands. Despite the inducements of such forestry the reality is that forestry ties up farmers’ land forever as the land has to be replanted once trees are felled as part of the felling licence. Thus, such land would be taken out of agricultural production completely, which are vital for foraging harriers.

Cllr Sheahan states that “there is no reason why this bird (harrier) cannot coexist with some forestry and wind farms”. This is already the case even within SPAs where much of harrier breeding sites are within Coillte forestry which has replaced traditional heather moorland. However, such populations are vulnerable to changes in forest structure once the forest canopy closes and to further losses of foraging habitat due to changes in land use.

In the article in question I made reference to “OPEN SEASON” on the hen harrier if certain changes were not made. This remark infers that I advocate that this bird of prey be hunted similar to wild game that is hunted at certain times of the year.

This inference was entirely unintended and I apologise for any upset my comment may have caused. I wish to clarify that my comment was meant in the context of my political battle with the Irish Government to seek a proper plan whereby the landowners and particularly, the farmers are not out of pocket by a designation that hamstrings them from earning their livelihood.

This, unfortunately, is the case at present. I refer in my article to a situation whereby I believe all can co-exist. I ask would you seek to be compensated if your Government or local council made changes that devalued your property or adversely affected your ability to make a livelihood.

The records show that the overwhelming majority of landowners do not receive any compensation. When the SPA designation was introduced it was done in tandem with a compensation package to accommodate landowners. However, the scheme was axed in the very early stages leaving farmers out of pocket and their livelihoods threatened.

I hope I have provided you with some idea of the level of frustration experienced by landowners in the affected areas.

I would ask you, in the best interests of the Hen Harrier, to support me and lobby the Government and the powers that be in Europe for a properly managed and adequately funded plan of conservation so we all, as creatures of this world, can live in harmony.