August 1: Shining a light on an accomplished artist 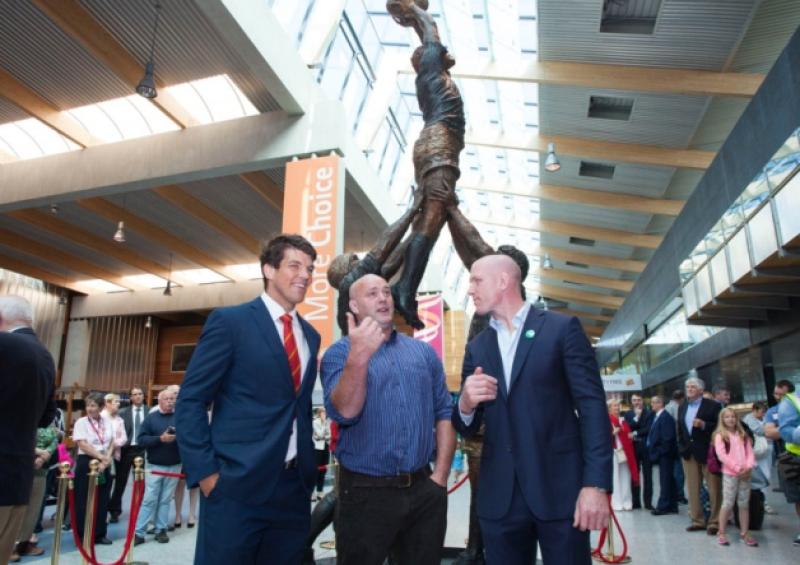 Last week your article ‘Iconic Moment in Irish History Stands Tall’, centred on the 20ft sculpture featuring ‘two giants’ John Hayes and Donnacha O’Callaghan lifting a third giant Paul O’Connell to the sky for a throw- in at the rugby match played in Croke Park in 2007 when Ireland beat England

Last week your article ‘Iconic Moment in Irish History Stands Tall’, centred on the 20ft sculpture featuring ‘two giants’ John Hayes and Donnacha O’Callaghan lifting a third giant Paul O’Connell to the sky for a throw- in at the rugby match played in Croke Park in 2007 when Ireland beat England

The article included a photograph of the three warriors seeming diminutive below the towering sculpture of heroic proportions while Patrick Campbell, the sculptor, was being interviewed elsewhere in the terminal building in Shannon Airport, before the unveiling ceremony took place.

While the Irish rugby triumvirate are very familiar national figures one would not risk to claim that Patrick Campbell is as widely known in Ireland as they are, even though he is internationally recognised as a worthy successor to the craftsmen who forged and fashioned the elegance of cities in Renaissance Europe.

He now has a studio in Florence, Italy where his work is prized and his sculpture the ‘Seven Veils’ a figure of a semi-veiled female bending backwards poses in the Plazza Medici Ricardi which is a palace designed for Cosmo De Medici in 1484, who is the progenitor of that powerful Italian aristocratic family.

Patrick’s focus on business changed when he was in his late fifties. At that time he had rescued Bewleys of Grafton St. Dublin and formed Campbell Catering which became an international tea and coffee enterprise which in its prime employed 5,000 people world wide. At this time , Paddy became more involved with introspective creative activities such as painting and sculpture in preference to business. He hoped studies in sculpture would improve his perspective in painting as a artist.

In 1996 he began to spend less time in Dublin by spending summers living as an artist in Italy. In 2001 he discovered his true gift for sculpture and took up studies of that craft at the Florintine Academy until in 2005, when he started his own studio in Via Luna, .Florence His most recent commission to go on exhibition in Ireland is the ‘Iconic Moment in Irish History’ which was in part fashioned in Florence and assembled in Ireland. Other Irish commissions include a bronze bust of former President Mary McAleese for the Arus and a portrait of Sean Donlon, former Chancellor of University College Limerick. University College Dublin has acquired a 5 metre high sculpture featuring two back to back dancing figures. Entitled ‘Wind and Water’ while a second version of this piece ‘Wind and Sea’ has been acquired by the Slieve Donard Hotel, New Castle, Co. Down.

A seven metre high sculpture ‘Life and Death’ was commissioned by the Comune of Vicchio del Mugello, west of Florence in 2012 to commemorate victims of all wars.

It features the figure a woman standing on the ground extending her hand to a male figure descending from the sky and reaching downwards. Not untypical of ‘the iconic moment’ in composition but not in theme.

There is also a Campbell memorial to people missing in the sea off Bantry Bay,  Co Cork

For this reason, I feel Paddy Campbell is not as well known as the nation’s sporting heroes are but is every bit as interesting to the nation as they are. He has certainly shared in the glory of ‘the Iconic moment’ among equals and added to its charm in Munster.