Out in the Open: No, I don’t begrudge moochers their dole 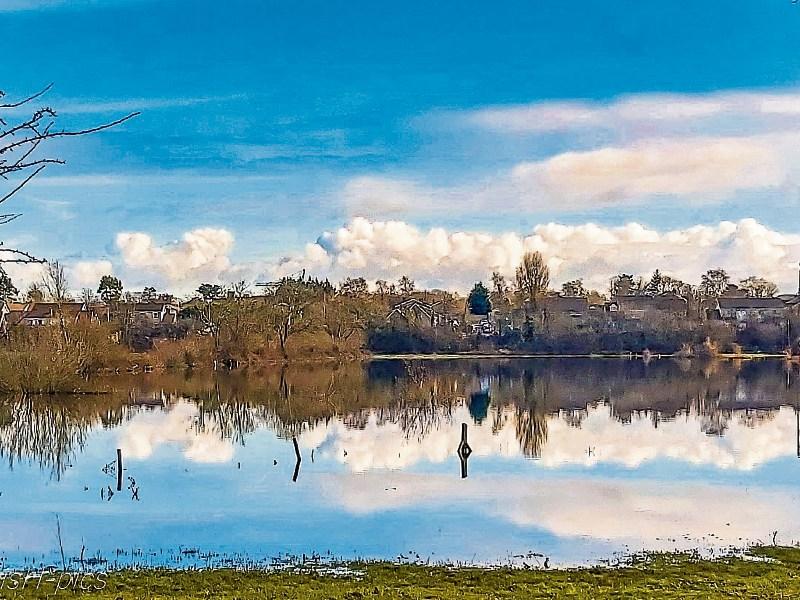 PICTURE THIS! Reflections on the fields by the river Groody taken on last Thursday morning by Denis Hickey

ONE fine day last week I betook myself for a stroll by the river. Here there and everywhere there were clusters of primroses brightening and enlivening the landscape. Birds sang and the river waters sparkles under the shining sun. A number of old and elderly people put in an appearance the first of the spring for many.

In the distance I saw a travelling man examine a hobbled pony who grazed on a grass margin free of charge. There was another traveller in his company who bore a resemblance to the late Jack Faulkner, and I noticed that as soon as they finished their inspection of the pony they stuck with their hands behind their backs, greatly impressed by the delightful combination of sun, water, the birds and flowers. Something was missing, however, but I could not put my finger on it at once. Then in came to me.

There was no tousled head peeking from behind bushes or beech trees. There was no youthful scampering or sallying or dodging. In short there was no mooching. I asked myself was it a thing of the past, if I lived in a world without traunts. Then I saw a pair of 10-year-olds peeping at me from behind a naked blackthorn bush and I knew that all was well with the world.

This evening I would like to say a few words on the subject of mooching. In the city they call it mitching. I remember when I was 10 there was an inquisition in our class into the reasons behind the absence of a boy whom we shall call Paddy. He only came to school on wet days. Other days he would spend sauntering through the woods and grooves of the outlying countryside on sitting in a pensive mood by the banks of the rivers and streams.

The teacher became suspicious but Paddy had an airtight alibi. His mother, as he explained was recuperating from a severe from illness and when the weather was fine it was Paddy’s job to act as her escort during her long recuperative walks. The teacher, whose own mother happened to be ailing at the time commended Paddy and told him there was no employment so spiritually gainful as devotion to one’s mother.

Having said this the teacher stepped behind the blackboard and wiped the tears from his eyes. He would be the last person in the world to come between Paddy’s mother and good health. He was a soft hearted man. God be good to him. He also knew that Paddy would probably learn more out of door than he would indoors. Paddy, like so many other misunderstood nature lovers, ws never cut out for school. To him, the classroom was a prison, a place of confinement, where he simmered painfully till the bell rang and the prisoners were released.

Fine days were therefore a Godsend. He could commune with the outdoor things far away from the outrageous and bewildering puzzles which appeared on indoor blackboards. There is no one reading this who hasn’t known a natural moocher in his youth. He will be recognisable at once. It is also possible that you were on yourself. If so, please do not take umbrage. No harm is intended. But let us return to Paddy. His mother’s convalescence was longer than anticipated an so he felt free to roam at will over the countryside.

All good times, however, must come to an end. One disastrous morning the teacher’s wife met Paddy’s mother coming from Mass and there followed a short but meaningful discussion on the allied subjects of poor health and recuperation. Paddy was found out and so awful was the punishment inflicted upon him by his father hat he never missed a day at school thereafter

Paddy was therefore not a real moocher. A real moocher would have mooched again and again and no power upon this earth would deter him when the mooching fever smote him. There was one such dedicated moocher in another class. I daresay there was a dormant one in every class.

Group moochers I have no time for, no more that I have time for packs of mongrel dogs. Group moochers are always mischievous and there is attached to them a shiftlessness and an idleness which can seriously deform characters in the making. They lack the appreciative powers of the natural born truant who can sit like a Peruvian Indian, admiring for hours on end the symmetry of a basking trout in shaded water or the fluttering of young green leaves on beech and sycamore. Let us return, however, to our dedicated natural moocher.

Our teacher of the time was a sharp intelligent chapy who instantly recognised a moocher when he saw one. He was the only teacher I ever know who was possessed of this power and when confronted by a moocher for the first time he would ask the fellow to stand up.

Let us presume that the boy’s name was Moloney. If there are Moloneys reading this who may object to the use of the Moloney name, let them rest assured that if the chap’s real name was Moloney I would use another name altogether like McAneaney or Fitzpatrick or even Keane. No one knows better than I do how deeply people can be hurt over the use or misuse of the common name.

I’ll never forget my own feelings on my way to Cork by train one winter’s afternoon several years ago. At Mallow I invested in the Cork Evening Echo. When the train resumed its journey I read the paper. At the bottom of the front page was a two column heading which read as follows. “Mass Murderer Electrocuted.”

The story underneath concerned the execution of a chap who had strangled several women. His name was Keane. I immediately threw the paper out the window and went to the toilet, where I stayed in solitary confinement for the remainder of the journey.

“Moloney,” the teacher would say, “ as I have no evidence against you so that you have no way of knowing the extent of my wrath, but you, Moloney,” he would go on, “you have a moocher’s eyes and I hereby warn you that you are not to indulge your folly whilst your are in my class.”.

The teacher would then pause as all accomplished mentors do, in order to allow his message make itself felt.

“Moloney,” he would continue, “the State has contracted me to send you forth from this place with a reasonable education. Since I have no intention of breaking that contract I am going to see to it that you do not break it either. I am a moocher spotter and I had you tagged Moloney, the minute you took your seat in class.”.

Moloney would nod respectfully and any onlooker would be convinced that the message had reached home.This was far from the case because Moloney, like all dedicated moochers had not been listening. He had been seen to be listening and his expression would give the impression that here was a boy who was determined to take the right road, but what he was really doing was listening to the wind in the big sycamore outside the window and seeing in his mind’s eye the surface of the river shattering under the upstart breeze.

He looked to be the most attentive pupil in the class but everything that was being said and done was going in one ear and out the other.

The teacher in question was aware of this and any time he had an errand to be run he would chose Moloney in the hope that the odd sortie into the outside world would serve an antidote to the mooching malaise which was forever itching to break out in his pupil. The teacher failed because there is no known antidote to mooching.

There came in the course of time an attractive day when nature smile on wood, river and field. Moloney failed to show up. The teacher reported the fact to his father, an easy going man who had been a moocher of note in his own school days.

The Civic Guards were called in and other boys in the class were asked to report Moloney’s movement. It was all to no avail. Inevitably there was a court case. The father was fined and threatened with jail. For a few days Moloney returned to school, long enough to sit for and pass his Primary Cert. It still hangs in the parental home over the fireplace in the kitchen, next to a picture of the Sacred Heart. Apart from his birth certificate, this was the only certificate, he would ever possess.

He got a job but did not hold it for long. The call of the world was too strong. He lost the job and got another. Always he would take off when nature signalled that there was need for open spaces.

At present he spends most of his time along the river bank accompanied by his dog. He does not fish nor hunt. Your accomplished moocher has no occupation other than that of mooching. The only practical thing he does is draw the dole. I don’t begrudge him that because it is a poor community that cannot carry a lone moocher. It is a find way of life and only a few are chosen. We should not look askance at these prodigies. Rather we should accept them, for does it not take all kinds to make a world?

This article by the late great John B Keane first appeared in the Limerick Leader on March 12, 1977.