Out in the Open: Bosses, set an egg test for would-be employees 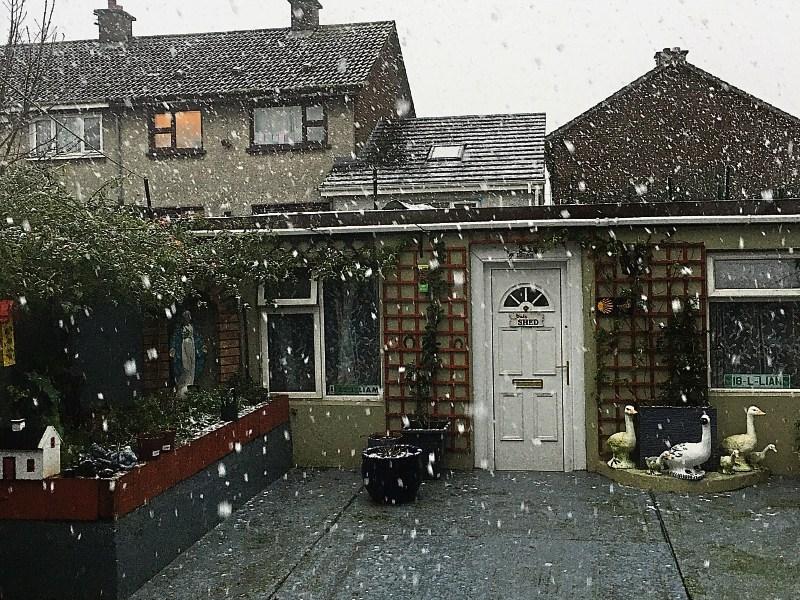 PICTURE THIS: Is it spring yet? Michael Sheehan snapped a recent snow shower

LONG AGO, when I was a boy, that is to say a real boy wearing short pants, with no interest in girls, the cap of a boiled egg was a much prized addition to the breakfast or supper of a growing girl or gorsoon.

In those halcyon and innocent days eggs were not as plentiful as they are now but it is fair to say that an adult duck egg with a sufficiency of bread, butter and tea was enough to satisfy a grown man and a growing child for breakfast, dinner or supper, as they case may be.

Your adult duck egg was twice as large as your adult hen egg and a generous cap from one of these flavoursome and spheroidal orbs, the product of a mature duck, was as satisfying as a decent sized sausage or a modest cube of pudding, black or white.

We are not here however to discuss the nutritious properties of hen eggs or duck eggs. We would be intruding in the domains of others were we to do so. We are here instead to look at the lost art of egg-capping. There are of course countless ways of capping an egg and were I to recount all the known methods from Chinese to Scandinavian we would fill most of the columns in this venerable newspaper.

I would ask prospective employers who chance to read this treatise to consider this egg-capping test as a means of assessing the merits of candidates for important positions.

The candidates should be invited to a capping of boiled eggs. While they are engaged with the capping of a particular egg they should be observed closely.

For instance, a man who caps his egg with knife, spoon or other acceptable and orthodox capper without first contemplating the contours and size of his egg without prior inspection is the kind of fellow who will rush headlong into delicate situations without primary investigation of any kind.

Another type of egg capper who should be treated with suspicion is he who crushes the top of his egg with a single, savage blow of his spoon. In doing so he crushes the egg cap beyond repair making it extremely difficult to scoop out the cap’s contents cleanly and without an unwanted interspersion of shell fragments. This candidate would be ideally suited to a job testing landmines but for any sort of delicate mission one would be better off with an elephant.

But as the aforementioned types are the most dangerous the most dangerous type of all is he who caps his egg without even looking. Here is a show-off, a man in search of instant success and glory. In reality a fellow who will involve his firm in serious trouble in the long run. Remember that no two eggs are alike either in shape or size and remember that most important of all that the texture of shell in one egg maybe able to endure several times the stress of the shell of another egg.

In short the man who does not look while he caps can fall prey to any number of mishaps. To mention but one, let us presume that his egg has been inadvertently boiled soft and that the texture of the shell is paper-thin, as when often happens when least expected.

He strikes the top of the egg casually and the next thing you know the soft yellow yolk is sent flying here and there and everywhere. Need I say more about the effect a thoughtless palooka like this would have on a decent firm trying to make its way in the world.

Here now is a portrait of the type of egg-capper who, in my estimation, would be ideally suited to a responsible job. Watch him closely when the egg is placed in front of him. His first action will be to address himself properly to his egg. His second act, if act it can be called, will be is to survey the egg critically for several seconds, this to determine if it is an unusual or freakish spheroid or just another egg. His third act will be the most significant of all and here is where he will excel himself.

He will lift the egg from the stand and hold it lightly in the palm of his hand for a moment or two, judging its weight and its general characteristics. He will then transfer it from one hand to another, this in order to avail himself of a second opinion so to speak. Satisfying himself that no further advantage can be gained from handling his egg he will return it to its stand.

Now he will look to his implement of decapitation, which in this case we will suppose to be the common spoon. This he will weigh carefully in his right hand only, since this is the hand which will carry out the decapitation. Then, decisively, without further ado, he will seize stand and egg together with the left hand gingerly tapping out a specific circle at the top of the egg. Inserting his spoon under this circle, he will decisively remove the cap of the egg.

Here is your man for any position of trust and responsibility. Here in the words of the poet, is your sound binocular.

Let us now look at other types of egg-cappers. We will begin with the most sensitive and delicate of all to wit, your ordinary bald-headed man. It is a known fact that most bald headed men spend more time capping the egg than they spend eating it. There is so much preliminary tapping and tipping that often the other occupants of the breakfast table have lone finished wiping the yoke from their jaws and jowls before your hairless - pated, egg prober commences his meal.

This is because your bald headed egg capper imagines it is his own head which is on the block, so to speak, and for this reason he treats the smooth, bald top of the egg as though it was his own carmium.

By contrast, your hard chaw with long, wild, uncontrollable hair makes a sudden and savage onslaught upon his egg. With no preamble of any kind, he smites with the cup of his spoon on the top of the egg or on the bottom of the egg, if this area is presented to him.

In rural Ireland it was and still is looked upon as a bad omen, if the bottom of the egg is capped. Although I have questioned several mature countrymen at length, there was no one who could explain why the capping of the wrong side, as the called it, was destined to bring bad luck to the capper.

Not everybody uses an implement while capping an egg. The orthodox implements are of course knives or spoons or any other metal object which might be convenient. Some outdoor types whose hands have been calloused and hardened beyond sensitivity, by the nature of their work merely tap the egg against the kitchen floor until it is properly fractured.

It is then a simple matter to removed the cap by employing the thumb and the index finger to sever it with minimum force from the body of the egg. I have seen men of this like tap the egg against the soles or heels of their shoes and something against their heads.

It is of no matter really so long as the top of the egg is sufficiently fractured to facilitate easy removal of the cap.

Those of us who like a boiled egg regularly will have little difficulty in capping our eggs with reasonable success. Practice may not always make perfect, but it helps and there are many of us who could cap our eggs blind folded, provided they were not too soft.

Your soft egg is the hardest of all to decapitate. Great care must be taken from the outset unless we are to have trails of yolk defacing the sides of our egg. In-depth capping of soft eggs can be disastrous and the safest course is to remove only that amount of shell which will leave enough space for the entry of an egg spoon.

Some wily egg eaters when dealing with soft eggs, fracture the top of the egg and remove the shell from the fractured area with the fingers. They then remove the naked top of the egg with the spoon.To my way of thinking this is not a very sporting method. However, none of us are born egg cappers and we must begin somewhere.

The best way to induct a newcomer such as a toddler to the art of egg capping is to start him off on eggshells. This can be done by the simple expedient of turning the empty shell upside down in the eggstand. There is no danger that ill luck will accrue since the shell is empty and cannot be said to be a whole or legitimate egg. After four or five years practicing on upturned eggshells the youngsters in question is certain to acquire reasonable proficiency and may be trusted under supervision to cap his own egg. Maximum proficiency comes only with adulthood and even then I could be loath to trust soft-bodied eggs to those who might be under the influence of alcohol or who may be suffering from nervous disorders.

This article by the late and great John B Keane first appeared in the Limerick Leader on February 12, 1977.