Out in the Open: Mickey, the healthiest man I ever knew 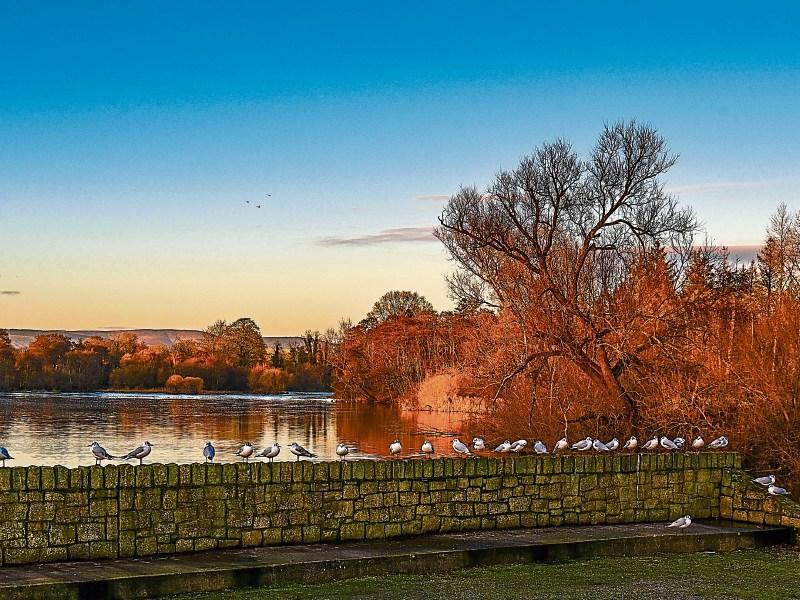 PICTURE THIS: Gulls lined up by the river in Castleconnell on Friday evening by Denis Hickey

THE TWO most valuable assets a man can possess are good health and peace of mind.

If you wish, you may interpret peace of mind as the grace of God.

Peace of mind may be acquired by living a full Christian life, whereas good health, alas, depends upon a variety of things ranging from self-denial to downright hard luck.

There is nothing so fickle or capricious as health, and no matter what we do may be certain that it will peter out one way or another sooner of later.

Often the healthiest people are those who pay no attention to their physical well-being while others who spend their lives cossetting and indulging themselves are prey to every unattached germ and susceptible to all forms of mishap.

The healthiest man I ever knew was the late Mikey Falkner, the traveller.

His son, Jack, is no stranger to these columns and regrettably no stranger either to ill-health which seems to have dogged him persistently for the past ten years.

Only last week he ended another convalescence in Listowel District Hospital.

Jack has a dickie heart, and his medical advisers insist that he rest up now and then.

His father on the other hand, until the time of his demise, was never a day sick in his life and his friends and relations will testify that he endured more hardship in this life than Sinbad and Marco Polo put together.

It must be twenty years ago now since I was told of a mighty feat of endurance by Mikey Faulkner.

My informant was one Phil Leahy who worked as a harness maker for the Tarrant Brothers of Listowel's market place.

Charleville readers will recall for he worked there over a long period.

He also had a formidable reputation as a dart player.

Anyway, it was Phil's habit during his sojourn in Listowel to take a stroll through the market place as far as the river wall before reporting for work at nine o'clock.

Here he would survey the smooth waters of the Feale River as they rounded the market cliffs on their way to the Cashen Mouth seven miles further down.

Hail, rain or shine Phil would make this morning pilgrimage and he recorded many a strange tale as a result of these morntime meanderings.

He well remembers one particularly bitter day in the month of March.

There was an icy wind from the East which whipped the river waters into spume and spray and sent the seagulls careering in shrieking protest all about the grey skies.

There had been hard frost the night before, and the roofs, the roads, the streets, and the fields were varnished and crusted with white.

It was a time, as O Henry once said, when a woman without sealskin coats grew kind to their husbands.

Cut into this wretched climate Phil Leahy ventured as his won't.

In the market place, he was greeted by the sting of the attacking wind, but he nevertheless made his way to the river wall where he noted the turbulence of the tidebound waters and experienced the total wrath of the East wind.

He was about to return to his place of work when he beheld in the lee of some old sheds two frosted figures lying as still as death under a pair of threadbare sacks.

They are surely dead, he thought, for no one could endure such exposure through the fullness of a night and expect to be alive in the morning.

He stood undecided for several moments and then suddenly to his great relief, one of the figures stirred.

The other figure reacted and moved also.

Then of one accord, both figures sat upright.

They were none other than the late Mikey Faulkner and his kinsman, the late Paddy McCarthy, the famous strong man who many a time cocked horsecart wheels on his chin on fair days at Newcastle West, Abbeyfeale, Listowel and all the other towns and villages which were glad to host itinerant artists from time to time.

Paddy McCarthy was also a bullwhip specialist, and he would summon audiences with the rifle-sharp cracking of this long, leather swiper.

He was also prepared to lie on beds of six-inch nails, and many is the time I gladly subscribed a penny or halfpenny to this superb artiste.

He could swallow fire if needs be and for a sixpenny piece, you could hit him as hard as you liked on the chest or stomach out like all artistes he was temperamental and was not above waging war on all-comers when in his cups.

With Mikey Faulkner by his side, Paddy McCarthy looked out on the bleak, bitter world.

His eyes fastened on Phil Leahy.

Immediately Phil lighted a cigarette and handed it to his fellow human.

Mikey Faulkner declined the offer of another, opting instead for a black dudeen of a pipe which he located in his trousers pocket.

After a few drags on the cigarette, Paddy McCarthy reached underneath the sacks and withdrew a quart cider bottle which, to Phil Leahy's experienced eye, was filled with porter.

Paddy McCarthy unthreaded the Cork, wiped the jowel and handed the bottle to Mikey Faulkner.

Mikey swallowed deep and long until half the bottle or near enough was well and truly imbibed.

Paddy McCarthy swallowed secondly but did not finish off the contents.

He left a sizeable dram, for Phil Leahy who explained, however, that he would be unable to stomach flat porter at such an hour on top of his breakfast.

Paddy, therefore, handed the bottle to Mikey Faulkner who bolted it no bother.

Both men then rose and shook themselves like spaniels fresh from water.

They folded the sacks, retrieved the bottle, and made their way into Market Street proper where drink was available if you had money in your pocket.

At the time Mikey Faulkner was 80 years of age and his friend, Paddy McCarthy, a mere 70.

I received quite a large number of letters during the holiday break.

I will choose one and let me say at once that this letter, or indeed any other letter published in these columns, expresses only the views of the writer and whether I hold with these views or not is neither here nor there.

The writer of the letter in question, name not for publication, is from Kilready, Castlemahon, Co. Limerick.

"Dear John B, I am home on holidays from England and went to the carnival dance. One night was enough for me."

I am ashamed to say the youth of today are only jackasses, pushing, and no respect for ladies. They are rough thugs in the dance, and they act the blackbuards around the marquee every night.

Girls are raped, and you could have a sale of panties after the dance. The entrance is badly lit up and in a dark avenue. I am 22 years of age, and in the five years that I have been working over in Kilburn, the youth are changed to ignorant hoboes.

In Kilburn if you were rough you would be put outside the door. Nowadays in Ireland, there is no control kept in dances, marquees specially.

Castlemahon dances are a scandal, and I must say I am ashamed to have been born here.

The dances are packed with Tinks, but the others are just as bad.

Girls are screaming in all directions after the dances.

They are even pulled out through the marquee during the packed dances.

Please print this in the Leader and expose what is happening in marquees.

NOW FROM the poet Michael Ryan of Bawnreagh, Askeston, comes a from about the recent bank robbery. I haven't enough space to print it all.

There was a great bank robbery in old Askeaton town.

When strange men drew an overdraft, about ten thousand pounds;

Sergeant Rooney rang up Cooney and told him mournful tales,

Of ten pound notes and fivers being carted off in bales

A bank clerk spoke unto his mate upon that fateful day.

Then a voice from behind a machine gun roared, "Here, hand me out the till."

The robbers smiled as people piled upon the new-tiled floor,

Saying "thank ye most sincerely, we'll sure come back for more";

But one impatient lady shouted, "thanks a lot for nothing; I'm getting pins and needles around my belly button."

But now the bank is rich again; the locals rallied round,

One man gave a thousand, he found it on the ground;

No not an ounce of cheque shall bounce nor account be left untended,

For Buffalo Bill shall guard the till lest Jesse James might spend it.

This article was first published in the Leader on July 24th, 1976.