Out in the Open: Spinster and the egg: a true work of art 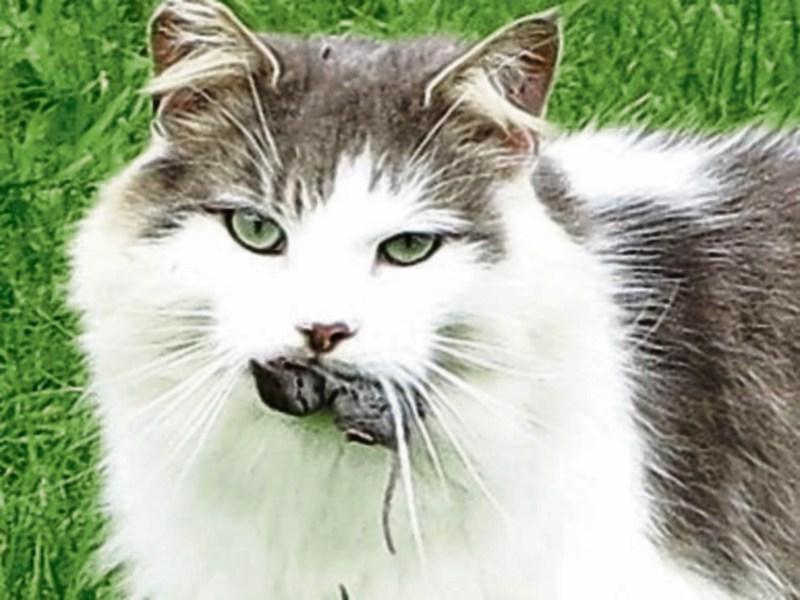 PICTURE THIS! Look what the cat dragged in - taken by Claire Waters

MOST PEOPLE like ourselves would have no idea what constitutes a work of art or a masterpiece or a classic in any field.

That is why I have come here today to enlighten and elucidate.

I remember after I read Pickwick Papers for the first time to have discussed the book with an older friend who was regarded by those who would know ass a man who always knew what he was talking about.

We were in a public house at the time, nursing glasses of stout, and debating the merits and demerits of books and bookmen.

When asked about the great Dickens' work, he answered at once:

"Pure and simply," said he, "is it a masterpiece."

He did not elaborate further, and when I pressed him to do so, he merely said:

"For God's sake, do not ask me to repeat myself."

I agreed with him, of course, that the work in question was indeed a masterpiece but ever since that initial exposure to what is regarded as a work of art, I have been tortured by the idea there are millions of people who would have no idea whatsoever what are the peculiar structures, characteristics, and fundamentals that relate to a masterpiece or any such mastery and everlasting fabrication.

Upon completion, a work of art qualifies for tax immunity.

Authorities in the field in question examine the work and, provided it reaches the required artistic standard, the work is passed.

These works mostly consist of sculptures, paintings, poems, and other forms of literature.

Alas, there is no tax concession for a perfectly constructed rick of turf or cock of hay, and this is where the artistic evaluators are falling down on the job.

A cock of hay, a rick of turf, of a thatched roof, when perfectly made, constitute works of art, no matter what those in authority may say to the contrary.

Those readers who are familiar with my style will concede that I am not a man to prevaricate or mix words.

I am getting paid to do a certain job, and if I do not perform that job in a satisfactory manner, then I look upon myself as a failure.

That is why, this evening, I am going to undertake to present to the public for the first time in the history of human construction a story which might be regarded as a finished work of art.

The story is not mine, so there can be no questions of bias.

I will be making no claim for tax deduction when the world eventually accepts the story for the masterpiece that it is.

Neither de Maupassant nor Aesop nor Hans Anderson nor the Brothers Grimm have ever conceived a story as profound, as simple and as effective as the one which shall be shortly unfolded, if you will be kind enough to bear with me a while yet.

I concede that many readers must disagree violently with my submissions, but this I am prepared to accept.

After all, I am not the last word on such matters.

There are other stories which I might have submitted; great folk takes of the past on the lengthy sages of epic proportions and proven durability.

But no, I have chosen a tale which actually took place in my own time, although not exactly in my own place, since the locale happens to be a mountainy area about 15 miles away.

The simple people around whom the story revolved owed allegiance to no particular political party and were charitably disposed to creeds, dogmas, and tenents which were in conflict with their own cherished articles of faith.

They were good neighbours not given to gossip or slander.

They were regular Mass goers and monthly Communicants.

When they killed a pig, they retained the worst portions of pudding and pork-steak for themselves and distributed the tastier cuts to their more needy neighbours.

In short, they were good people - but good as they were, they were not without flaws, as you shall see.

In the final analysis, however, it is you, dear reader, who must decide if that which I am about to present to you is a work of art within the meaning of the act, as it were, and in every sense of the word so to speak.

I would advise those who are opposed to artistic disclosures of this nature to put out the light and go to bed, or if it is too early in the evening, put on your hat and go for a walk.

I would prefer, however, if you were to bear with me for a brief while yet, as we are now approaching the nub of the tale.

In the mid-1930s, on a wet morning in February, a distant relation of mine abandoned the single way of life and committed himself to the institution known as matrimony,

He lived in the heart of the Stacks Mountains with an only sister who was destined to be a spinster for the duration of her life on this earth.

There was no fear that the sister would be thrown out on the side of the road, for the simple reason that her father had specified in his last will and testament that she was to have room and board in the house till she closed her eyes permanently.

She was also to have several drills of spuds and the use of the pony and trap to Mass and town.

Until the time of her brother's marriage, it was a contented household.

There was a workman in the house who ate off the same table and who had his own room upstairs.

The sister helped with the milking, with the fattening of pigs and the rearing of calves and all the others chores that relate to a running a farm.

She was a damsel who minded her own business.

Her chief interest was the welfare of her brother.

She ran a spotless establishment, and her only boast was that she never needed the assistance of another woman for the successful running of the household.

Also, she maintained a fine flock of Rhode Island Reds.

The hens were great layers, and the cocks were fit for the table of a bishop.

Now we come to the heart of the business, and I would, therefore, ask the gentle reader to pay attention, since this is where the core of the masterpiece is about to manifest itself.

At that time, in rural Ireland, most honeymoons consisted of a day in some convenient town or city.

The bride and groom would go by bus, train, or hired car.

There were others who did not bother about such outings, contenting themselves with the prospect of bed alone.

These were simple folk, who had a real sense of values, who knew that hunger was the best sauce.

Everybody knew where they went for the night, so there was no need to ask that question.

After a brief wedding party, my cousin and his wife returned home.

The sister sat in a corner near the hearth.

The freshly-made husband stood with his back to the fire.

The servant boy sat at his customary place at the bottom of the table, awaiting his supper.

For a while, there was a heavy silence.

The ancient clock could be heard ticking clearly in the room.

The cat purred by the fire, but these were the only sounds.

A great dramatic change was about to take place, and everybody present was aware of this awesome fact.

Still, the silence reigned, but the change could not be put off forever.

Suddenly the clock chimed the half-hour.

It was the signal for the beginning of the drama.

"Time for the tay," said the husband.

Having made the announcement, he sat at the head of the table and indicated to the sister that she was to sit at his left hand.

The wife it was who set about laying the table and wetting the tea.

Authority had been handed over.

Things would never be the same again.

The curtain had been drawn on one of the great, recurring tragedies of the countryside.

"Will you," the new mistress addressed herself to the servant boy, "be after eating an egg?"

"Why not I?" the servant boy replied.

"And will you," she asked her husband, "be after eating an egg?"

"No trouble to me," the husband replied.

"And will you" she enquired of the sister-in-law "be after eating an egg?"

"It is how I wouldn't eat my own egg?" answered the sister-in-law.

That's all there is to the story.

Maybe you don't think it's a masterpiece.

If you don't, all I can suggest is that you digest the story fully.

In one sentence, the sister-in-law has indicated that the future will be one of constant warfare.

The wife might have used a subtler approach or enlisted the aid of the other women preparing the supper.

Instead, the inevitable confrontation happened prematurely, and the scene was immediately set for a classic and truly traditional confrontation.

This article first appeared in The Leader on December 11, 1976.