Out in the Open: Gratuities for the frequently maligned publicans 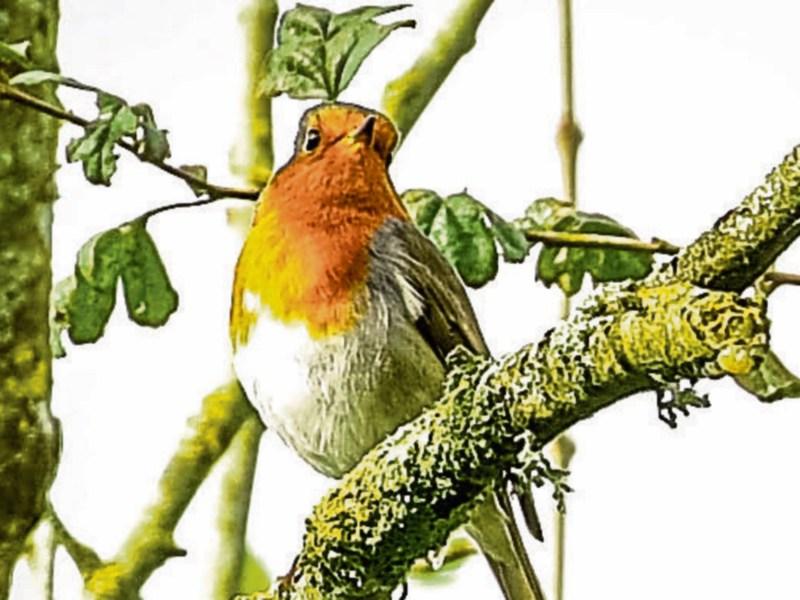 PICTURE THIS: A robin at Lough Gur snapped on Sunday morning last by Denis Hickey

PUBLICANS are much in the news at the present time. Prices are under review, and there are numerous letters to the Press accusing them of overcharging.

Publicans, of course, have always been vilified by non-publicans and by those who feel that publicans should be made to work for less than pork butchers or travel agents, just to give a few random instances of other mouths dependant for the bite and sup on the whims of the public.

Country publicans do not charge as much as city publicans for the good reason that they are expected to do all the work themselves, thereby containing the price, having no overheads so to speak and being frequently assisted by unpaid members of the family, to wit; wife and kids, or any related soul who happens to abide under the same roof.

In my youth and to a lesser degree, to this day, country publicans, i.e small town and village publicans, worked very long hours indeed.

They worked before hours, and they worked after hours and how they were rewarded for being so obliging to thirsty souls?

They were brought in the courts where they were fined and their licenses endorsed.

Some said they should be shot for selling strong drink to the fathers of families, while others said their licenses should be taken away altogether.

They were an ideal target on dull Sundays when parish priests and curates sought to wake up their flocks.

It would be unthinkable too for visiting missioners not to lambast them at least one night during the annual retreat.

Whether they deserved this treatment or not is immaterial because one way or another, everybody in this world is here to suffer and publicans are no exception.

There used to be a theory abroad when I was a gorsoon that publicans in towns and villages were clothes and fed almost free of charge, and therefore, were fully deserving of any aspirations cast upon them.

It was argued that more articles of clothing and footwear, together with parcels of prime beef and mutton were left behind in public houses by drunken customers on fair days than would supply the needs of a fair-sized family.

This, of course, as all honest-thinking people know, is an outright fallacy.

The truth is that a publican would be put to the pin of his collar to survive on these gratuities.

Having been a publican in those not-too-distant days myself, I can vouch for the fact that gifts of meat were few and far between, gifts of clothing rare in the extreme and instances of abandoned footwear occurred only every three years or so and coincided with the laying on of the sacrament of confirmation.

In my early days as a publican, the first garment abandoned on my premises was a black overcoat worn and tattered that was of no further use to anyone.

The next item left was a brown papered parcel of meat.

I located this on the evening of the big October cattle fair, and asked around if it belonged to anybody on the premises.

I concealed it beneath the counter first to forestall false claims.

"That would be mine so it would," said a cadaverous countryman with a porter-stained jumper..

"What sort of meat was it?"

"Ordinary mate," said he as if there was no other sort.

"Was it beef, mutton of bacon?" I asked.

To this, he made no reply.

I quite honestly did my best to locate the owner.

The following day we consumed the meat ourselves lest it go rotten.

From time to time, parcels of good quality meat would be left on the counter by absent-minded, drunken men wearing long black overcoats and caps.

When I could not consume it myself or if it was too fat for my liking, I would give it to a deserving family who always made quick work of its disposal and prayed, too.

For the anonymous doner, I'm sure.

Parcels of sausages and black pudding would be left regularly, and after being sporting occasions like the annual races of Listowel, there would often be a surprise gift of a good quality mackintosh or a respectable tweed overcoat not to mention numerous fashionable caps and hats.

In fact, after the races to this day, I am besieged by poorly-off callers asking if I have anything to fit them.

All this has changed, however, and it's been years since a parcel of meat was left on my counter, although somebody left a pound of back rashers last Saturday and I must say that they were most palatable.

The reason, of course, is that nowadays every countrywoman has a car of her own and even those who have not to live contiguous to those who have so that the purchase of meat is now out of the hands of countrymen.

Looking back, those were good times in the public house trade and the forgotten articles which I have mentioned, nicely supplemented one of the most unreliable trades known to mankind.

I remember once after the great October cattle fair, which attracted thousands of people to Listowel to have collected the following items outside and inside the pub counter at the close of day; three ash crops deposited earlier for safe-keeping, two black overcoats, one frieze and the other a second-hand Garda's, also deposited for safekeeping; one hat, one cap and one message bag full of groceries.

Also left was one pair of leggings, several brown-papered parcels of fresh meat and one of bacon.

There were also a few parcels of sausages and prime black puddings which were a specialty of a local butcher whose name was John Joe Kenny and whose puddings were much in demand all over North Kerry and West Limerick.

Charlie Lenihan's puddings were later to dominate the scene in which Matt Donohue's drisheen is all the go today.

Most of these articles were deposited with the guarantee that they would be called for when the day was over.

Not one article was collected by its rightful owner.

The following day I distributed the forgotten items among the more deserving of my customers.

After fair days I would be visited by old men from the district who would open the conversation like this:

"Was there ever an oul' pipe left after the fair?"

Women with large families would sometimes call in the hope that an overcoat or a pair of shoes might have been left.

Often when a countryman purchased a pair of shoes or boots for one of his offspring, he would tire of lugging the box around the lodge, it in some public house.

In those days there were seventy public houses in the town, many of them trading under the same surname, so that it was difficult to remember which was which in the heel of the evening.

The fact that the owner of the shoes would be half-drunk did not help him in his search.

Very often, there would be sharp eyes in a public house watching for forgotten articles.

I personally knew a woman, and God be good to her, she fed her family on what she picked up quickly and surreptitiously in crowded public houses on fair days or other busy occasions.

There she would sit nursing a glass of porter or lemonade, experienced and rapacious eyes scouring the scene around her.

Enter a countryman wearing a cap and coat and with a substantial parce lof meat under his oxter.

It was easy to determine whether the meat was fresh or salted.

The blood always seeped through when the meat was fresh.

Straight to the counter with the countryman.

He calls for a half-pint of porter, or maybe a small whiskey.

The drink is served.

He searches his pocket for the money to pay.

He places the parcel of meat to one side while he fumbles through pocket after pocket.

Eventually, he manages to put the exact amount together.

He takes a sip out of his drink and extends a reassuring hand to confirm the continued presence of his parcel.

There is no parcel.

No blame to the woman in question.

It wasn't for herself she stole the meat and besides her husband, had jettisoned her years before and boarded a ship for England, where he promptly set up house with another.

I often feel that woman should have been canonised.

She survived disgrace and humility to provide for her children and signs on, they turned out to be as fine a bunch of men and women as God ever put into the world.

I remember the most bizarre collection ever left in the pub.

It was the evening of a January horse fair twenty years ago.

The day had been a busy one, and prices had broken all records.

Men who brought horses and ponies to town for the heck of it were quick to sell with the inducement of a record price.

Deposited or left behind permanently on that day were three sets of resins, a saddle, three winkers, and two plaited whips.

This article first appeared in The Leader on November 13, 1976.