Out in the Open: How we used to answer the call of nature 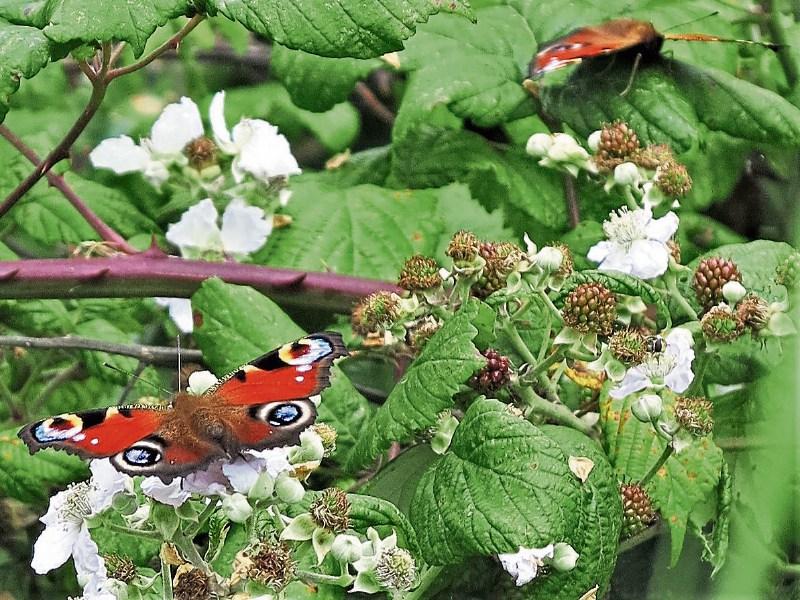 Wonderfully-winged creatures: Claire Waters sent in this pic of butterflies

WHEN I was a gorsoon, there were no toilet rolls in our house. The same applied to every house in the street. There were, of course, many alternatives.

The most common was your accurately divided newspaper or magazine, cut carefully into rectangular pieces consisting of an approximate area of thirty square inches. These would be neatly sheafed together, and the top left-hand corner would be perforated with an awl.

I'd swear that there are ill-disposed and needlessly illiterate incompatibles reading this who don't know what an awl is.

Through the perforation pretreated with the aid of the awl, a slender cord was thrust until equal parts of this cord extended from each side of the sheaf. Both ends were then knotted together, and the whole hung from a nail in that place referred to as the privy of closet.

In the country dwellings where there were no such edifices, the countryside itself, meaning its more privately appointed groves and dells, was used for calls of nature.

Logically, one could not expect to find sheaves of paper hanging from the bushes and trees in these isolated places.

Mankind, however, always inventive and ingenious in awkward circumstances, turned to the leaves of the trees and bushes in question for a fully comprehensive toilet service.

Where leaves were not available, there was other greenery, satin-textured and otherwise, for those of different tastes.

The most commonly used plant was the dock, and your ordinary dock leaf was without peer, in this most private and embarrassing of functions.

Then you had an abundance of lichens, mosses, and other tender cryptogamic plants without peer in this field.

Indeed we have mention in history books of queens and empresses being favourably disposed towards the softer members of the moss family.

Purely for the record's sake, let me say that in China long before Chairman Mao's ascendancy the emperors and nobles of that vast country were in the habit of using goslings and ducklings for this chore.

After each exercise, the creatures were released, unlike hare coursing, where the victims are used again and again regardless of their feelings in the matter.

Let us return, however, to our friend the countryman and extend the theme of toilet materials a little further, if for no other purpose than to enlighten today's pampered public in the event of their being caught short as it were in places far removed from fully equipped public and private lavatories.

Your countryman in the absence of mosses, lichens and dock leaves could always turn to Mother Earth herself and her fleecy cloak of rich green grasses.

Those unfortunate enough to be possessors of tender or inflamed, or indeed hyper-sensitive posteriors, sought other than grass for the removal of impurities, dilatations, and what-have-you.

These unfortunates would betake themselves to the vicinity of a small stream or river and upon finishing the business in hand, might sit themselves down in a shallow but fast-flowing stream.

There, happily, they might sit and ponder where the cleansing waters did the dirty work, so to speak.

In these blissful surroundings, such afflicted souls might listen to the soft music of murmuring waters or hearken to the delightful melodies of the innumerable birds which people the trees and bushes standing along the banks of these beneficial waterways.

There is the danger however that these absent-minded recumbents might submit more than their posteriors to the laving waters for it is a known fact that unexpected floods have often carried off the unspsecting and the drowsy without as much as a tweet of apology and with no regard for the feelings of those left behind.

Such is nature; gentle and advantageous one minute, and the next, savage and remorseless.

These unexpected disasters should serve to remind us that although it is the most commonplace of human functions, it should never be embarked upon without some consideration for the amenities available immediately afterward and without careful investigation of the immediate lie of the land.

Otherwise, tragedy and misfortune may raise their ugly heads.

In the absence of an indoor toilet, those seeking outdoor relief would be well advised to check the ground beneath their feet and to examine the texture of the foliage and grasses in their immediate vicinities.

The approaches should also be taken into account, for in the great outdoors you never know from whence danger is likely to threaten.

A smell scenic glade is the most admirable of all retreats in this respect.

The drowsy buzzing of bees and the whisper of gentle winds in the overhead foliage have much the same effect as a muted background orchestra, although there are many who prefer to read a book or magazine whole so preoccupied.

It is vital to locate a place well removed from the alarms and bustle of the world.

It is often wise to follow a cowpath, for these end under shady bowers in the quiet corners of green fields or they lead to serene, secluded, out-of-the-way places beneath lofty river banks.

Your only danger here is from frolicsome bull calves who will simulate the stance and rage of their elders and indeed often chance an assault if they can get away with it.

Some readers may find it surprising in this day and age to find people who cannot avail themselves of indoor toilets.

These unfortunates suffer mostly from nervous disorders of claustrophobia, and there is also a few, adventurous few, who risk the outdoors purely for the sake of adventure.

In Listowel, up until a few short years ago, there was a man who used to climb trees in order to relieve himself.

God help the unwary passer-by and a thousand woes to him who upon hearing a hustle overhead felt obliged to gaze upwards.

Anthropologists would do well to study men of this ilk.

It might prove conclusively that man is indeed descended from the great apes and that now and then much of this apishness surface unbidden.

It might account also for much of the horse-play, vandalism, and violence so prevalent at the present time.

To return to our Listowel friend, it must be said in fairness to the man that he chose only remote arboreal retreats.

His preference for the outdoors ended on a January evening when the bough upon which he was perched was assailed by an unexpected gale of wind.

Already the bough was slippery from the rains of the previous night.

Our unfortunate friend was more or less in what we may call a 'lavatory trance' when the calamity occurred.

In vain did he try to maintain his balance, but the odds, alas, were stacked against him.

He was caught, as the saying goes, with his trousers down.

With a fearful shriek, he fell to the ground, breaking upon landing his collarbone, some odd ribs, and his left leg.

He would not climb a tree now for love or money nor indeed for any other reason, no matter how pressing.

There was another individual, an acquaintance of mine now happily married in Canada, who refused all indoors amenities on the grounds that they tended to soften the human race and make them too dependant on gadgets, aids, and contrived situations.

The individual favoured the tops of cliffs- seaside, landlocked and riverside - and let it be forever to the credit of his innate acrobatic endowments that he never once came a cropper.

I asked him why he persisted in behaving as he did.

He answered that he did it for the hell of it.

Well, now we must conclude, and there are those who will question the need for such a long discourse on this particular subject, let me remind them that mountains are there to be climbed, rivers to be crossed and subjects to be explored.

This article first appeared in the Leader on September 4, 1976.