Out in the Open: Giving Cupid a helping hand: Dan Paddy Andy 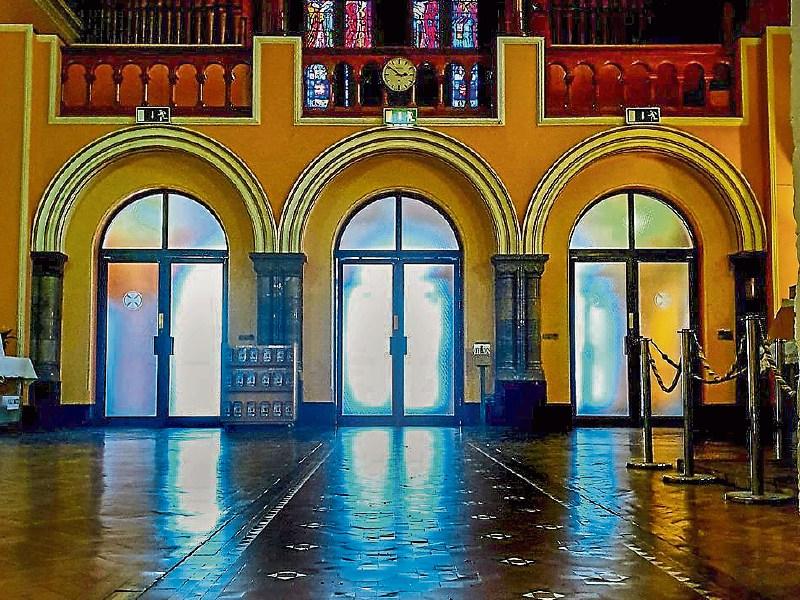 Dan Paddy Andy, as we have seen in earlier studies was responsible for over 400 marriages.

Only one of these failed to work but this was not Dan's fault.

No indeed. Rather was it the fault of the female partner who was unwilling or unable to play her part in that part of martial obligation so unpoetically referred to as the consummation, the marriage, therefore was a fiasco, and of her own accord the bride returned in due course to that spot from whence at first she came, to wit, her own corner of the hearth in her farther's house where she lived unhappily ever after.

The man she left brought in another woman in the course of time. He referred to her as his housekeeper and who are we to say that she was anything else? They had a son, a priest, and a daughter a nun, and you don't have progeny like these where you have irreverence and impiety.

One evening inside his famous dancehall in Renagown, Dan Paddy Andy was passing the time exchanging news snippets with some other elders of the neighbourhood when somebody suddenly sang the praises of the fine weather which was part of a heat wave brightening the country at the time.

The meaning of this declaration did not escape his more astute listeners. What Dan implied was that a wet day made work impossible but while waiting for the rain to pass a man might profitably plan new undertakings while he stood or sat in the shade.

Now there happened to be in the company a cranky sort of a man who favoured the single way of life on the grounds that he could make no fist of a woman. He was a man much given to enawvshawling and cronawing and seldom indeed would you hear the good word out of him.

"Wet day or dry day," said he in his lonesome way, "there is a widow in the townland of Tooresharrive that won't have nothing to do with me."

His tone was such it seemed that Dan Paddy Andy was to blame for the widow's indifference. This was far from being the case, however, for Dan had several times spoken to the widow in question on the fellow's behalf. All to no avail, however.

She complained that he had black teeth and lonesome ways, but even these she was prepared to overlook if he made some attempt to indicate what precisely he had in store for her.

"Blasht you," said Dan, impatiently, "wouldn't you make a drive at her and take her in your gabhail and swear your honest love for her and hould her for a minute by the butt of the ear with them two black fang o' yours. A kettle was never boiled without fire and a woman was never won by wishing."

Having said this, Dan Paddy Andy cast a contemptuous look in the direction of the whiner and announced finally that corn cannot be cut without edge.

It was plain talk but it worked. Our man must have taken the bull by the horns for he was legally married to the widow in the fall of that same year, and whether they lived happily ever after is something that only they themselves can tell you for they gave no sign, one way or the other, to the public in general as to whether they were content or not.

There can be no doubt but that the marriage was consummated for issue appeared within the prescribed time.

This is all to show what a very wise, sage and thoughtful individual was Dan Paddy Andy O'Sullivan.

"Give me a fair slip and a long turn," Dan once confided to me, "and there's no hare I won't turn."

Towards the end of his career, Dan was approached by a widow who had been happily married for many years to an active and powerful man. She scorned the advances of lesser men after his demise, and she once declared to Dan Paddy Andy that she was now dependent on the electric blanket, for heat, comfort, and consolation.

"I have a mighty man for you," said Dan, "from the townland of Scartaglin, and 'tis an electric fence you'd want to keep him from consoling you."

Another time Dan Paddy Andy was approached by a strapping man in his late twenties who sought the hand of a well-built, healthy farmers daughter who lived no more than a stone's throw from his own dwelling. On previous occasions, he had made his intentions clear, and the girl himself had seemed anxious enough for a permanent settlement provided her father gave his blessing to the bond.

This is the old man stoutly refused to do, opting instead for a small, ancient, wizened farmer who also lived within easy access to the girl. When the young man came to Dan Paddy and explained his case, the venerable matchmaker scratched his head and confessed that he was somewhat mystified. The man in question had a thriving place with healthy cows and a stone house.

He struck Dan, however, in the absence of evidence to the contrary, as a suanach, that is to say a man not in possession of the equipment to consummate a marriage.

When Dan pointed out his suspicions, the young man who denied the charge hotly, when asked by Dan if he would be willing to submit himself for inspection, he announced that he was agreeable.

The pair went to Listowel to consult a doctor who assured Dan after inspection that his candidate was as fine a specimen of manhood as he had ever come across.

"Now," said Dan, we must take ourselves to a photographer."

When the young man asked for what reason Dan informed him that it was to ally any fears the father of his choice might have regarding his masculinity. After a good deal of persuasion, he allowed himself to be photographed in the nude.

As soon as prints were available Dan made tracks, for the house in question where he asked for an audience with the father of the girl.

When they found themselves alone, Dan produced a photograph and handed it to the old man who examined it hastily, nodded his head, and handed it back.

"Now are you satisfied?" said Dan.

"Satisfied over what?" the old man asked.

"Satisfied," said Dan triumphantly, "that this man has all his faculties."

"I never doubted it," said the old man.

"Then tell me," Dan asked exasperatedly, "why won't you allow your daughter to marry him?"

"I'll tell you," said the old man, "and I won't put a tooth in it. My objection to this man is that he cannot kick a ball with his right leg."

"Nothing", said the old man, "but if this man was to have sons and if they were to play football they might not be blessed with the use of two legs and as a result they would find it hard to get on the Kerry team for doesn't everyone know that you must be able to kick with the two legs if you want to wear the green and gold."

This answer satisfied Dan Paddy Andy. He went to his client and ordered him into training, instructing him to practice his right leg till it was as good as his left. The young man practiced night and day, and after a space of three months, he had acquired maximum proficiency.

At the next football game in which the young man was engaged the father of his heart's delight was amongst the attendance. The old man's pleasure knew no bounds when he was the distance and height of the young farmers kicking with left and right legs.

He slapped him on the back when the game was over and invited him forthwith to the nearest public house where Dan Paddy Andy happened to be taking a drink at the time.

Drinks were called for, and a match was made.

The young pair, I am happy to say, lived happily ever after and had three sons, not one of whom could kick a ball with the right leg, which goes to show that breeding will often come out no matter how hard one practises to conceal it.

Immediately after the marriage Dan Pady set out for the house of the wizened old man who had been spurned at the last moment by the young woman.Dan pointed out the high mortality rate among old men who married young woman and after a short while convinced him that what he needed was a woman nearer his own age who wouldn't knock as much taspy out of him.

By pure accident, Dan Paddy Andy happened to have such a woman in his books.

This article first appeared in The Leader on August 14, 1976.