Out in the Open: How to win friends and summons people... 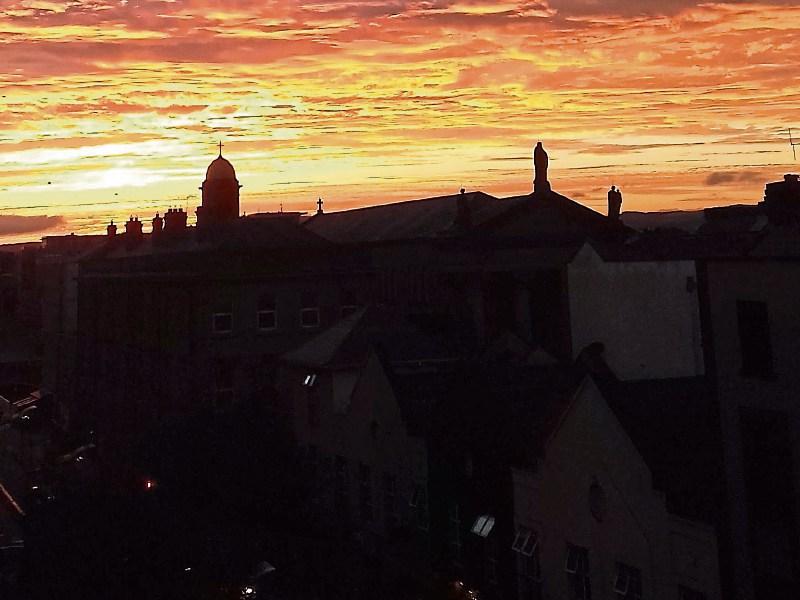 PICTURE THIS: Pauline Lane sent in this stunning photo of a sunset over Limerick city

LAST WEEK I met Louis Heaphy of Ballylongford. At the time he was in a hurry but in the short while at his disposal he disclosed that he had retired from the business of process-serving.

One can confidently say that Louis Heaphy is the only gentleman engaged in this particular profession who made more friends than enemies in the course of his career.

When Louis Heaphy handed over a summons the recipients upon seeing his now-famous smile thanked him instead of abusing him. He made little of the many civil bills and processes which he was forced to present to those who, one way or another, had contravened one or more of the codes by which men survive.

"It could be worse", Louis was fond of saying to those who had fallen foul of the law, "if it was your death warrant." This was always accompanied by the smile which made him famous.

"In all my years," said Louis proudly, "I do not recall making a single enemy. At first I was treated with suspicion but as soon as they found out what a nice fellow I was they took me to their hearts."

Once when Louis attempted to hand over a bundle or summonses to a Listowel man with a reputation for violence it looked as if his number was up.

The man emerged from a room waving a double-barreled shotgun which he thrust under Louis' nose.

"I'll count three," he said, "and if you're not gone I'll blow your brains out."

Louis just stood there and smiled. Finally the Listowel man broke down and flung the gun to the ground. He accepted the summonses.

"How could I kill a man with a smile like that?" he said later.

Two of Louis Heaphy's more memorable experiences bear repeating. Once in Tralee he handed a man nine summonses. It only wanted a few days for Christmas so to cheer the fellow up Louis introduced himself by saying: "I have a nice Christmas box for you my good man."

The victim examined the envelopes and then thrust his hand into his fob pocket.

He withdrew a ‎£5 note which he handed to Louis.

"Have a drink on me and my creditors," he said magnaimously.

The second experience happened one viciously cold January morning about ten years ago. Louis' overcoat pockets were bulging with summonses as he cycled into the face of a hailstorm towards a certain village in North Kerry.

His hands and face were blue with the cold and from his stomach came the ominious rumblings of genuine hunger.

In his hurry to deliver his letters Louis had breakfasted in haste. Now it was well into the day and the need for a substantial meal became most pressing.

At midday he stopped at a house by the side of the main road. He dismounted and knocked gently at the door. A loud or imperious knocking only served to forewarn those for whom he possessed summonses.

The door was opened by the woman of the house who was at once taken by the infectious Heaphy smile.

She presumed he was an insurance agent or a man endeavouring to sell all football coupons.

Louis sat himself down by a warm Stanley No 9 and just as he was about to open up a conversation with the woman the man of the house entertained. He had never seen Louis Heaphy before nor had Louis seen him.

His salute was civil enough.

At once he took off his cap and sat down to the table which was laid in readiness for his dinner.

With a dishcloth in her hands the woman of the house withdrew a plate from the oven of the range and placed it on the table in front of her man.

Louis licked his lips but made no comment when he took not of the plate's contents.

As far as he could make out it contained two pork chops, three medium sized, good quality spuds, a fist-sized mound of mashed parsnips and what amounted to three or so tablespoonfuls of tinned beans.

There was also an adequate supply of gravy nicely distributed around the plate.

The man of the house blessed himself ceremoniously and opened the proceedings by disposing of a full forkful of well-gravied parsnip. Louis Heaphy's mouth watered.

"Well now," said the man of the house good-naturedly to Louis, "pray tell us what we can do for you?"

"Wait till you have the dinner down in you," said Louis, "and I'll tell you my business then."

"Fair enough," said Louis and so saying he withdrew a civil bill from his pocket.

He handed it to the man of the house who opened the envelope at once to find out what was contained inside. His mouth opened and his jaw dropped when he read the document.

He pushed the plate which contained his dinner away from him and rose slowly from the table. Louis stood by not knowing what to do or say.

The man of the house drew on his cap and made for the door, a wan look on his face.

"Where are you going?" the wife asked in dismay. The husband made no answer as he lifted the latch.

"One minute before you go," said Louis. The man paused in the open doorway. Louis pointed at the dinner.

"What are we going to do about this?" said he.

"The hunger is gone off me," said the man of the house.

"Have you any objections," said Louis, "if I take over where you left off?"

"Work away," said the man of the house and with that he was gone.

Louis made quick work of the meal and when all was disposed of he addressed himself to the woman.

"One of the finest feeds I ever ate," he said, "tis above in the Gresham you should be."

Louis duly drank the tea, and greatly reinforced, he made his way out into the cold afternoon to deliver the remainder of his summonses. Well, he's retired now is Louis Heaphy and he will be missed for no man could fork out a summons the way Louis could. He took the harm out of it when he turned on that famous smile, a smile indelibly incused in the memories of the many with whom he conducted his deliciate business."

WHERE HAVE all the sea trout gone? Every year towards the end of June thousands upon thousands of those delectable silvery fish made their way up the Feale River from the Cashen Mouth to spawn on the gravelled reeds they have done for countless millenniums.

Every June they could be bought at reasonable rates on riverbanks and in fish shops.

The young boys of the district would travel from door to door endeavouring to dispose of excess catches.

This year, however, there has been a frightening falling-off and only a few scattered shoals arrived from the Atlantic.

No explanation is available locally to explain the huge reduction in numbers. The bitter truth is that if there is a comparative reduction over the next decade or so there will be no sea trout whatsoever.

Personally, I made several attempts to purchase the trout as I normally used but there were none available.

I then decided to do a spot of fishing at a spot in the Feale was has never failed me in the past. With rod and line and a choice assortment of irresistible flies I made my way riverwards.

It wasn't enough when I arrived so I sat awhile by the river admiring it's motionless lineaments delicately mottled with infinitesimal flecks of foam.

The birds had sung their last. It was that time of evening when light resigns itself to half light, yielding finally to darkness. It seemed as if all nature was aware the consummate stillness was required if an honourable surrender was to take place.

In this delightful climate I cast a speculative trio of flies.

They rested gently on a boil where always in the past I had hooked and landed a sea trout. This time there was no response from the dark waters.

After a few fruitless hours I gave up and went home with an empty bag. Several other anglers of my acquaintance had the same story to tell. Yet, nobody seems to want to know that a species of fish is being threatened out of existence.

Has a time come when we are taking for the granted the inevitability of universal pollution?

This article was first published in the Leader on August 7, 1976.