Out in the Open: The sea.... it’s a sure guarantee of savage brutality 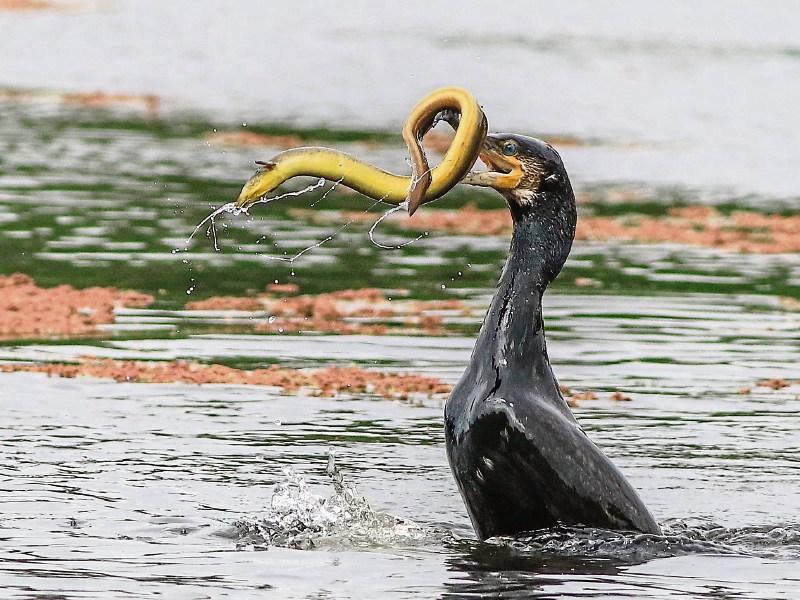 PICTURE THIS: Gotcha: A cormorant chows down on an eel in the Westfields Wetlands. The photographer, Pat O’Donnell, spent an hour watching the bird hunt before snapping the breathtaking shot

WHENEVER I read of a safe beach in a holiday brochure or any other form of publication I am appalled at the lack of knowledge displayed by those responsible.

Certainly, it may not be my first time to say this, and I can only attribute the enormous falsity of these outrageous claims to ignorance of the true situation.

There is, of course, no such thing as a safe beach no more than there is a round square and a glass hammer.

Many of the bereaved family knows this to its cost.

To clinch the argument, let me assure readers that safe beaches account for the lives of several gullible bathers every year.

Let me concede, however, that if there are safe beaches, there must be all the powers that be, safe oceans.

Only an idiot could accept the existence of safe oceans or indeed safe tides whether ebb or whatever they flow.

I have always regarded the sea as a vista rather than a swimming pool.

The sea is a thing to be admired, to be wondered at but it is never to be contended with under any circumstances, except alone for the saving of life.

The sea is not a pool.

You may bathe and splash by all means, and you may paddle to your heart's content, but you may not entrust your body to it completely for it has no compassion for human life.

Those who venture out of their depths no matter how powerful or talented they may be, are gambling with dynamite.

They are pitting puniness against the most savage power on the face of the earth, for the sea never wearies, so please, ye brochure-makers, let there be no more of safe beaches.

Remember what Bryon had to say in Childe Harold:

Roll on thou deep and dark blue ocean roll

Then thousand fleets sweep over thee in vain.

Man marks the earth with ruin his control.

Stops with the shore upon thy watery plain.

His wrecks are all they deed nor doth remain

A shadow of man's ravage save his own

When for a moment like a drop of rain

He sinks into they depths with bubbling groan

Without a grave, unknelled, uncoffined, and unknown.

I always publish in full where possible, but sometimes I find it necessary to delete passages for very good reasons.

There is unparliamentary language which I exclude lest offence be given to the more sheltered of my readers.

Less charitable columnists might interpret it as a tirade but not I.

It is for my readers to provide the interpretation.

"Dear Mr. Keane, quite by chance I read your 'Out in the Open' last week and can only say that it was the most ignorant concoction I ever read.

Fancy calling the low trade of a barman a skilled trade.

Anyone can fill a pint or draw a half whiskey. A child can uncork a bottle and tapering a barrel is now so easy that my grandmother could do it. With no experience whatsoever I myself worked for a reason in Kilkee, and after a few days 'studying the form', I was left in sole charge of the public bar for hours at a time, facing up to every sort of customer.

Most barmaids I know have little, or no education and the same applies to barmen.

Publicans, of course, are the worst of all. They sell their souls every day. They provide liquor to people who are already stoned, and they have no compunction about serving under-age teenagers. All they are interested in is the 'takings.'

This is the lowly business you say calls for skills and expertise and an exam like the Law Society.

You are completely irresponsible as a writer.

When you write for the Sunday World, you change your style.

You have the knack of pandering to all tastes at the lowest level, of course.

It was quite by chance I read your column. I will never pick it up by chance again.

Of course, there is no fear you will publish this, or if you do, you'll change it to suit your purpose."

As I said at the outset, a most interesting letter.

I would like to point out however that I am not the John Keane who writes for the Sunday World.

Neither do I serve drink to drunkards nor to people under the age of 18.

No pub has received more abuse, verbal and attempted physical, for maintaining standards, but enough.

I would suggest that Eleanor is a girl who believes only what she wants to believe.

Fair play to her, she is not afraid to put her name underneath her opinions.

IT IS not the first time I have been confused with John Keane of the Sunday World.

In fact, there are some who think he is my son.

As far as I know, we are not related in any way, but we do have the distinction of sharing the shame surname.

So had the late Aga Khan.

Khan, as most scholars know, is a corruption of Keane.

Genghis Khan is also from the same stable.

There was an old man who resided in Abbeyfeale until quite recently who always stoutly maintained that we were the same Keanes as Cain who killed Abel.

Then there was another one who used to say that one Keane and one Stack was enough in any parish.

This observation stemmed from the fact that both the Stacks and the Keanes had sharp eyes for any worthwhile farms which might be up for sale.

Between both families, an almighty amount of land was accumulated, particularly in North Kerry, in the last 100 years or so.

Seen in the bog

SOME MONTHS ago we dealt with the serious dumping which has been taking place for the last several years in lovely Dirha Bog.

The disclosure thankfully, did not fall upon deaf ears.

A week afterwards, the rubbish had disappeared.

A thousand thanks to the county council and to any others who may have been responsible for the removal of these disgusting eyesores.

There has been no dumping since and let us hope that people everywhere are now fully conscious of the visual horrors created by thoughtless dumping.

There is, alas, another road in Dirha Bog.

As you enter the bog from the Listowel side, there is a sharp right-hand turn about halfway down.

If you take this turn, it will lead you for roughly 500 yards to the road we have mentioned.

Here this is some of the worst dumpings I have personally ever seen.

There are rags, bottles, and bones.

There are empty paint canisters, broken chairs, worn wallpaper, and a singular collection of useless utensils.

There is, in fact, every sort of discarded object you care to name.

This rubbish is deposited on the side of the road which, I am told, is the responsibility of the Land Commission and not the county council.

Here is, positively, the most woebegone sight in all of North Kerry.

One may ask who is responsible?

Those who own plots of bog adjacent to this road assure me that the dumpers are definitely not from the town of Listowel.

This I accept because there is an urban council dump next door to the town.

Why should a man travel three miles to dump illegally when he can dump legally on his own doorstep, so to speak?

PERHAPS THE most astonishing single sight ever to greet the eyes of any turf-cutter was an array of cows' heads on the roadside near his acre of bog one bright morning earlier this year.

The heads glistened white in the weak spring sunlight, and at first, the hapless cutter thought he had stumbled on some ancient burial ground which had been unearthed during the night by some freak landslide or other form of subterranean turbulence.

Later I saw the collection by myself.

I was in the company of Sonny Canavan whose herd of goats grazed the grassy cutaways around us.

Canavan was no longer mystified as to the source of the heads. The night before he had consulted with his talking dog, Banana the Sixth.

"How in the Name of God did they get there?," Canavan asked himself as he sat by his fire.

The dog, who was sitting nearby, overheard.

"They weren't put there by a greengrocer," the dog said.

"And they weren't put there by a bicycle repair man," the dog said.

"They were put there," said the dog, "by a man that kills cows."

This article was first published in the Leader on July 31, 1976.