Out In The Open: Why you should come to my home town this week 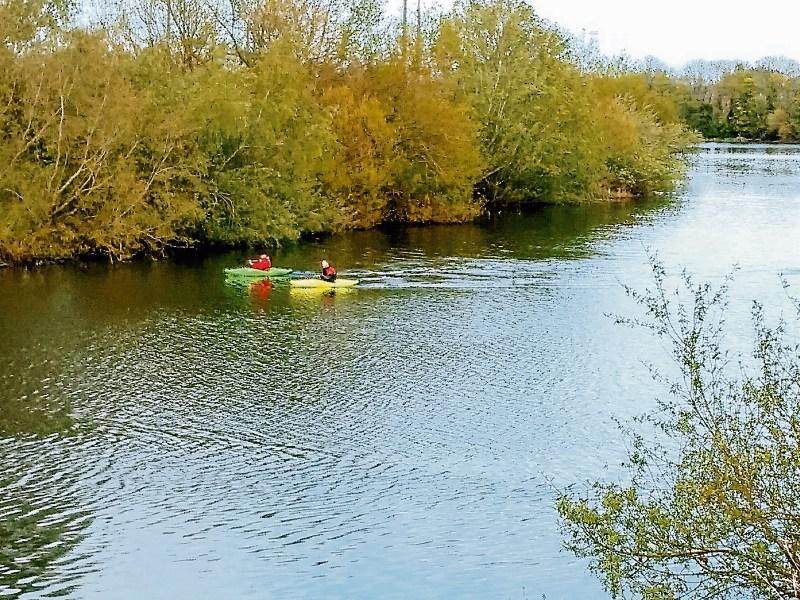 PICTURE THIS! Rolling on the river: Cruising on the Shannon by Noel Kelly

LISTOWEL’S Writers’ Week, the sixth since its inauguration in 1971, starts on June 1, which is Tuesday next, and ends the following Sunday.

A recent brochure compiled by the committees of Writers’ Week, this now internationally-famous event which this year is attracting no fewer than 37 publishers from Ireland and England who will see a host of new books launched.

There are also a host of reasons, according to the brochure, for coming to Listowel during the literary festival. Let me quote: “For stimulation on a cultural level; the development of appreciation of that which is worthy; to make lifelong friends; to experience the hospitality of a friendly town that has significant organisational success (Fleadh Cheoill na h-Eireann and Listowel Harvest Racing Festival are two that come to mind) and, of course, to enjoy yourself.”

This is a very accurate summation of what is likely to happen should you come. There is also the opportunity for aspiring writers to come into contact with some successful writers and more important still, publishers.

A conversation with an established publisher can be extremely beneficial to would-be writers.

Books, if they are to be read widely, have to be published and much of the soul-destroying approach work, the editing, the annotating, the rewriting and all the odds and ends from the blurb to the jacket, which have to be coordinated into a single marketable, readable effort, can be made so much less difficult by conversing with a representative from a reputable publishing house.

I think it is safe to say every major art form is exhibited in Listowel in one way or another, between the first and sixth of June.

Probably the most important single item is the fact that Ireland’s only annual book fair takes place in Halla Realta na Maidine and authors as well as publishers will be in attendance when the books which both parties have combined to create will be launched.

There will be a different play on view every night, presented by our leading amateur and professional companies. There are numerous art exhibitions, lectures, ballad sessions, poetry recitals and a general compendium of allied entertainments so diversified that no taste is overlooked.

Personally speaking, the hidden secret behind the success of Writers Week is the gracious informality and lack of pretension to be found at all levels during the most artistically comprehensive of weeks. Underlying everything is the absence of pressures of any kind.

During the week Listowel will also witness the opening of a new bookshop. At the invitation of the proprietor, Frank Pierse, I will be performing the christening ceremony. This event takes place at Frank’s newly acquired premises opposite Listowel’s cattle mart at three o’clock on the afternoon of Wednesday, June 3rd. Several nationally famous and internationally famous authors have promised to be in attendance.

This should be one of the week’s real highlights for there are few happenings so impregnated with hope for the future of writing and publishing as the birth of a bookshop.

Listowel has seen many come and go. Let us hope that this one will enjoy a long and successful life. Of course, I ask myself in passing if a bookshop cannot survive in Listowel, where in Dickens can it survive?

Anyway, Frank Pierse is one of the town’s most popular young men. He is also one of the leading actors with Listowel Players, has many memorable performances to his credit and a number of awards and commendations from the country’s leading drama festivals.

His many friends will, I am sure, be present on the occasion to assure his brave venture of a worthy send-off.

Now to other artistic matters. It is quite a while since a play of George Fitzmaurice has been featured at any of the amateur drama festivals for one-act plays and it would seem that George was born to be neglected.

Granted, Duagh did a very fine production of The Toothache two years ago - the Duagh accent is ideally suited to Fitzmaurice’s dialogue.

The most memorable play by an amateur company was the Listowel Drama Group’s All-Ireland winning one-act, “The Magic Glasses”, which appeared in Athlone over 20 years ago. This was a very accurate interpretation of the famous mini-masterpiece.

However, at the moment there just isn’t any worthwhile production of any Fitzmaurice work.

This is rather a shame because a Fitzmaurice production by either an amateur or professional company would be a desirable adjunct to Listowel Writers Week. One feels that drama companies in Listowel, Abbeyfeale, Newcastle and the drama conscious villages of North Kerry and West Limerick should be consistently presenting his plays.

Numerous books have been written about Fitzmaurice and while these serve in their own way to keep his memory fresh it is the production of his plays which would assure his immortality.

Contrary to local belief, George Fitzmaurice was not born in Duagh. Certainly he grew up there and the people of that area and their colourful speech modes were the chief influences behind his works. He once described them as “wicked and children”, but then this could be applied to any community from time to time.

George was born on January 28th, 1887, in Bedford House, which is less than three miles to the north of Listowel and which is still an eye-catching edifice, well preserved in part and owing much for its survival to the Relihan family who live there at the time of writing.

When Fitzmaurice’s father died in 1891, his mother found herself without the wherewithal to pay some modest debs and was advised wrongly, one feels, to mortgage the house, principally to pay off £60.

The family were forced to eventually forfeit the house and land and moved to a smaller house overlooking the Feale River quite adjacent to Duagh. There was a substantial farm going with the house.

At the age of 24, George secured a temporary clerkship in Dublin and six years later the Abbey Theatre produced his first play, “The Country Dressmaker”.

The following year, “The Pie Dish” was produced at the same theatre. Five years later the Abbey produced “The Magic Glasses”.

George served with the British Army in France for the duration of the 1914-1918 World War and returned to Dublin after the Armistice. Five years later, “Twixt The Giltenans and The Carmody’s” was produced at the Abbey.

When George retired from the Civil Service in 1942 he was a nonentity on the Dublin theatrical scene.

IN 1966 he died alone in a Dublin rooming-house at the age of 86. I knew one of the landladies and she told me that while he was inclined to be odd and irritable on occasions he was a gentleman.

George was exceedingly fond of a pint and consumed same regularly. He was regarded as a “tough” man to buy.

Nobody more than Liam Miller of the Dolmen Press was responsible in the late ‘forties for focusing considerable attention on Fitzmaurice’s work and during the first Writer’s Week he read a wonderful paper on George Fitzmaurice outside the Playwright’s old home near Duagh.

Personally, I don’t think that Fitzmaurice will ever again suffer the woeful negligence of the ‘forties. His work was now too well known here and in America for that, the best of his short plays was probably “The Magic Glasses”, with “The Pie Dish” running a close second.

Of his long plays, there is no doubt that “The Country Dressmaker” takes pride of place. It saw 181 performances in the Abbey Theatre and it is truly amazing that is has not been produced in recent years, say in preference of “The Shaughraun”, which seems to me overdone by the National Theatre.

Listen now to Luke Quilter’s love spiel on behalf of the reticent Edmond Normoyle, from “The Country Dressmaker”:

“It’s love we’ll be talking. It’s to tell you about this man I want. Your heart would soften if it was of flint itself if you know the way he does be above in Carnamona. When the day’s grand with the sun shining above in the heavens he do be in great wind and hope and joy be in him. It’s smiling like a half-fool he does be to himself and be listening to the thrushes and blackbirds and robineens singing in the little crough below the house for it’s your own voice he thinks he hears amongst them and they making ceol…

“But when the day is dull and chilly and the grey rain comes fleeting down Knowroe he do be lonesome in himself and not a word out of him, he thinking then somehow that your heart is sealed against him and that ‘twill never change.’