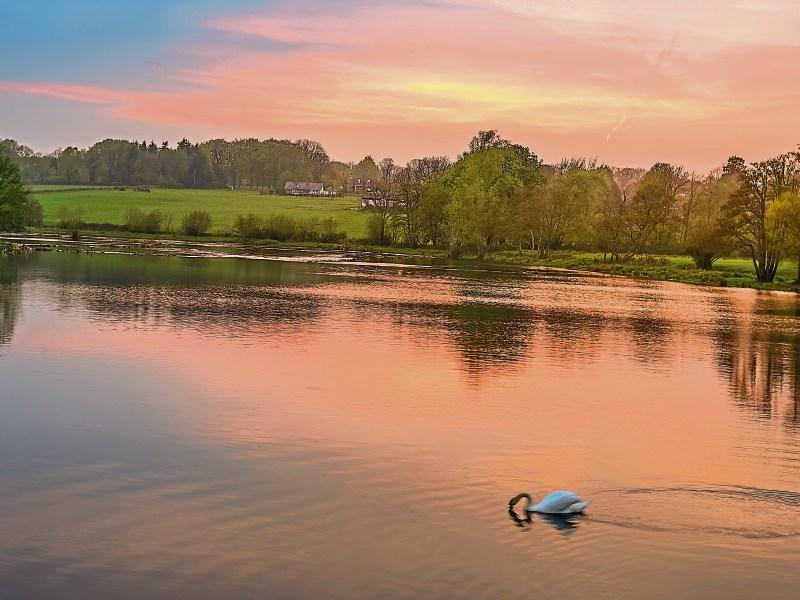 ON Sunday Morning last I took Jack Faulkner to Dirha Bog. It was no novelty for the famous traveller for he had camped there many a time in his heyday.

However, 20 years had gone by since his last visit. He met Canavan’s talking dog but was not impressed.

With the goats it was different. He was greatly impressed by the size and condition of the herd. He found the venerable pucks Rajah and Sultan to be the finest specimen he ever seen.

As we walked along he philosophised. The vast expanse of the brown bogland appealed greatly to him.

“No man to say come or go you,” said Jack, “and cathrawns go leor for a fire, a bonfire if you wanted it and the fresh air better than porter. “Do people know when their well off?”

As we proceeded peacefully onwards the powerful scent of heather imposed itself upon the more pedestrian odours of the roadway.

Larks appeared at our feet and went spiraling upwards caroling with sublime happiness. A forlorn ass looked at us apprehensively wondering if he were to be rewarded for forceful labour. A wild goose broke from a marshy bog pool, swishing furiously, decoying us from its nest.

A flight of plover rested where the heather was deepest and to seek the all-round loveliness the cuckoo called from a green grove in distant affoulia.

Where the bog turned to green a cabal of crows debated the feasibility of further flight from the giant conifer.

A small woman passed leading an ass cart which contained several bags of turf. She waddled rather than walked, the podgy constituents of her posterior relieved by good legs.

“I was often badly wronged,” said Jack Faulkner. “The hard word was put on me when I was in no way entitled to it. Men blacked my name and that was the worst of all because that was all I ever valued,” I thought of Othello. For Jack’s benefit I quoted:

“The biggest wrong that was ever done to me.” Jack informed me, “was by a cattle dealer one day in a pub in Newcastle West, Myself and Katie was sitting down minding our own business, drinking out of the same pint.

“Twas three days before Christmas and we were after spending the night before making the paper flowers.

“There was a gross in all packed into Katie’s basket. At tuppence apiece that gave you four bob with a pound, a small fortune in those days when you’d buy a good goose dor half crown and a gallon of porter for six bob.

“I seen good asses sold for a half sovereign. A haircut was a tanner. You could gwine to the cinema for fourpence and five Woodbines was tuppence with a few red matches for luck.”

What about the cattle dealer I asked.

He wasn’t a cattle dealer at all,” was the reply, “h eonly looked like one. There was the two of us sitting down minding our own business.”

“Do you smell something burning?” said the publican’s wife, and she coming from behind the counter. We sniffed and we snuffed but we could smell nothing bar stale porter and fag smoke.

The next thing Katie jumped up like a scalded cat and let go a screech. There was our flowers in a blaze. I done something I never done. I threw the porter on the fire but ‘twas too late. All that was left was black wire and ashes.

The man that started the fire was winking at another fellow, his crony. I was on the point of attack by I wasn’t long out of jail so I kept my wits and suffered in silence.

“I saw him in Glin ten years after an’ be going in the back for a pub to relieve himself. There was a heap of turnips in a corner. I picked a good one, I let fly and ran.”

So ended Jack’s narrative of injustice. There may be men who have suffered more but these must be few and far between.

IN A RECENT column there was reference to the origins and meaning of the word “Tumberawrd.” We explained that it was no more than an agreistic misconstruction or interpretation of timber yard.

Now from Foynes comes a letter, one of many from diverse places, concerning the village of Moyard in County Galway.

Many years ago there was a certain Foynes girl who fell in love with a soldier who happened to be stationed in Sarsfield Barracks in the fair City of Limerick.

The young soldier hailed from the district of Moyard in Co.Galway and when the war was over he returned home to the family farm which had been handed over to him by his ageing father. He incited the Foynes girl and her parents come and see the place.

At the borders of Clare and Galway they stopped to enquire for directions. The girls father, who was the driver, lowered his window and hailed an elderly man who chanced to be sauntering along the margin of the roadway.

“Excuse me sir,” said the father, “but could you tell us where Moyard is?”

“Your yard?” said the old man.

“Blasht you, said the old man, “How would I know where you yard is or what kind of fool are you that doesn’t know his own yard.”

They drove on and at a cross roads they beheld a well-dressed young man. They decided to try their luck a second time. On this occasion the girl asked the question.

“Could you please point out the directions to Moyard,” she said sweetly.

Eventually they located the village, and the young man’s home. There was a marriage and the couple lived happily ever after. Both are alive and well and living outside Moyard.

FROM Michael J.Collins of Ballinacurra, Limerick, comes another Moyard letter. Michael and his family happened to be searching for a guest house owned by a Missus Coyne of Moyard.

They duly arrived at Moyard after negotiating one of the twistiest roads in Ireland. The next thing was to find the Coyne household.

Let Michael tell it that way:

“I looked about for someone who might know the Coynes. I overtook an old man sitting on a common cart drawn by a slow ass. Pulling up I walked back towards him and fell in step to talk to him.

“Would you happen to know Mrs. Coyne of Moyard,” I asked.

“There was no response and I thought that maybe I had come across a non-English speaking gentleman. I repeated the question once more for luck and his eyes cleared.

He then gave me specific accurate directions.

By the way, we spent a marvellous holiday with Mrs. Coyne that year and several years after as well.”

NOW For a few lines from a poem written by Michael Ryan, of Bawbreagh, Askeaton.

Rejoice with me for days of Spring

So off with ye, ye winter woes

The corn is springing green.

At this day’s troubles we may laugh

And if your house of dreams has fallen

Do not be sad or look forlorn

But take advice from rook and wren

Pick up the pieces, Build again.

The article was first published in the Leader on May 8, 1976.