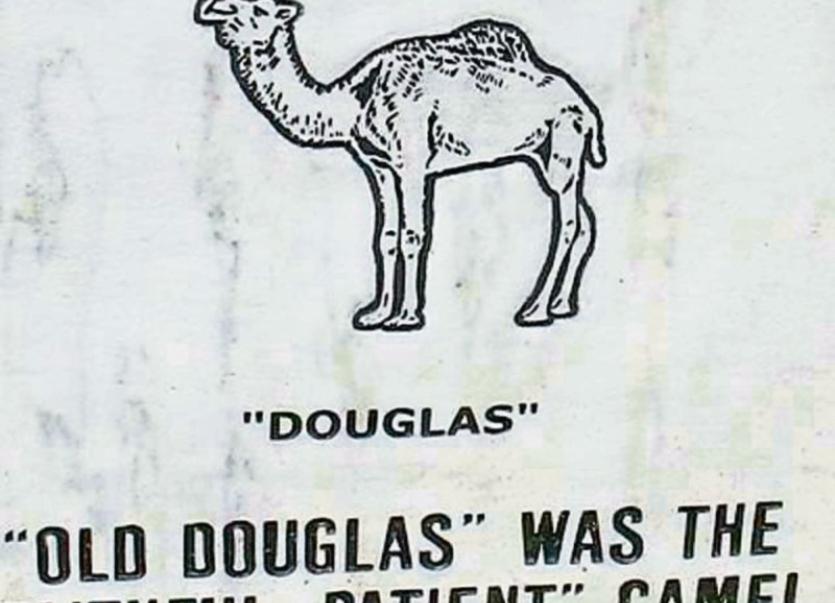 Our Kerry camel didn't have a headstone like Douglas here, to remove all doubt about his resting place

A GLIN reader called to see me last week in connection with the camel which is buried at Church Road, Duagh. He assured me that I had my facts all wrong and that the camel in question is buried between Carraigkerry and Newcastle.

As I recall, the story which appeared in these columns stated that the camel was buried by natives near the village of Duagh after the beast had run away from the travelling circus of Jack Hanratty, which circus, incidentally, folded in the town of Listowel after Hanratty’s wife had run away with the knife-thrower, Dan Fandango.

All this took place in the year nineteen hundred and six. There was also a baboon by the name of Bill who survived the bankruptcy.

He was a familiar sight on the streets of Listowel until he was cruelly stoned to death by some local cretins and farmers’ boys.

A photo of this monkey can be seen at the well-known inn, Captain John Shaughnessy’s of Glin. It is an enlargement from the Lawrence collection.

To press on, however, it is only fair that the other side of the story should be told. My Glin friend insists that the camel was stolen by a gang of Limerick knackers who thought to bring him to the city of Limerick where he would be in great demand as a showpiece.

This is what happened. After attending the circus in Listowel, they followed Hanratty to a public house where one of them pressed drink upon him. The others, meanwhile, stole the camel and bound him so that he could not move.

They then placed the poor creature in a common cart drawn by a horse and left the town in the small hours of the morning.

It was obvious if they went to Limerick by the coast road or by Abbeyfeale and Rathkeale the game would be up. For this reason they decided to go across the hills over the Limerick border via Carraigkerry.

All went well and the thieves were congratulating themselves when, suddenly, disaster struck. The cavalcade had reached that place known as the Old Mill which is approximately halfway between Newcastle and Carraigkerry when the horse took fright after the party was almost deafened by an unexpected peal of thunder which came crackling and pounding from the direction of the Athea hills.

The horse bolted along the mountain road and then, inevitably, at a dangerous bend the car capsized.

The knackers arrived breathless on the scene to discover that the camel’s neck was broken.

The next job was to bury the camel but for this they lacked the necessary implements. They retraced their steps until they came to Mulcahy’s public house where they engaged two men to dig the grave.

The pair were sworn to secrecy and, to this day, little is known about what took place outside of the district itself.

Indeed I would go so far as to say that this is the first time the story appeared in print, which is no mean feat when one considers that papers like the News of the World and the Sunday Mirror are constantly utilising their vast resources in an effort to find such scoops. Let us walk slowly, however, when our jugs are full.

I HAVE also in my possession a number of letters requesting more information about the knife-thrower, Dan Fandango, and Hanratty’s wife, whose name was Babe, and who was, I understand, closely related to a long-serving member of the now defunct Glin Board of Guardians.

I cannot reveal her maiden name, long ago as the time was, for the excellent reason that there may be relatives only too eager to cash in on indiscretions of this nature.

Dan Fandango’s nationality is not known. It is widely believed, of course, that Babe Hanratty was born in or around Glin.

I know that several old people in the area still verify this. Fandango was heterogeneous with the dominant strains probably Spanish or Portuguese, although he had an Italian nose.

He was a handsome scoundrel and was constantly in trouble with the parents of innocent lovesick girls who adulated circus folk and who were easy meat for the wily and practised Fandango.

Babe Hanratty was a beautiful blonde-haired woman of thirty-five at the time Fandango joined the circus.

Hanratty was twenty five years his wife’s senior and consequently the impulsive beauty from West Limerick must be forgiven much if she became enamoured of the charmer, Dan Fandango.

In no time at all, there was a turgent love affair boiling between them. When the circus folded, Jack Hanratty, the proprietor, went on a four-day booze which killed him. Babe disappeared before her husband’s demise with Dan Fandango. Neither of the pair was ever seen again.

Hanratty’s funeral was attended by a goodly number of people, many of them from the City of Cork, where he was born and where his father ran a drisheen shop on the South Main Street.

This shop is now a greengrocers and the name of Hanratty has long been erased from the frontage.

Hanratty’s grave is marked by a simple cross in Listowel graveyard. So ends the saga of Hanratty’s circus but I would prefer if it did not have to end here.

Maybe there are some readers who can trace the movements of the lovers after the closure of the circus. The world has great sympathy for lovers and consequently great interest in the stories of their lives.

HOW DEEP is the ordinary man’s political affiliations and how strong? Is it stronger, for instance, than his appetite for food?

The story I was told one day last week would suggest it is not. There was, one time, in Limerick a farmer by the name of Brown Jack. He was a Fine Gael man of the first water. Working for him was a man by the name of Mick O’Connor, a dyed-in-the-wool Fianna Fáil man.

One day out of the blue, a general election hove into view, and relations between the pair were strained to say the least. However, Brown Jack had a pig fattening and Mick decided he would endure all slights till the pig was killed and he had his share of the pork and puddings.

This was not to be. The day before the pig was due to be killed, he was stolen and never seen again. A few weeks later there was a Fianna Fáil meeting in Glin and among the audience to cheer on the local candidate was Mick O’Connor.

Finally, towards the end of the proceedings, the main speaker stood up to address the throng. He made many fine points and was well applauded. In conclusion, he asked three questions.

“Who,” he asked, “killed Michael Collins? Who killed Cathal Brugha? And who killed O’Higgins?”

The late, great John B Keane was a Leader columnist for more than 30 years. This column first appeared in our edition of May 5 1973

ANOTHER letter this week from our venerable friend, Tom Shine, of Glenquin, Ballaugh.

“Dear John B. - There is a story I’d like you to know about. It is all about a bugle. It is over two hundred years since this bugle was found lost after English gentry on a farm in Ballykinny belonging to John Collins, who was a well-known musician, and it is in the family to this day, so the man that has the bugle is a grandson, who is also John Collins.

“Well the history of this bugle is worth talking about, as it often saved families from being evicted out of their farms. Every time John Collins saw the bailiffs coming he would blow the bugle and people would come from miles off to hold the farm for the owner.

“I have told John Collins to take the bugle to your house for inspection. He is married to a girl from Kerry, a real nice person. Yours sincerely, Tom Shine.”